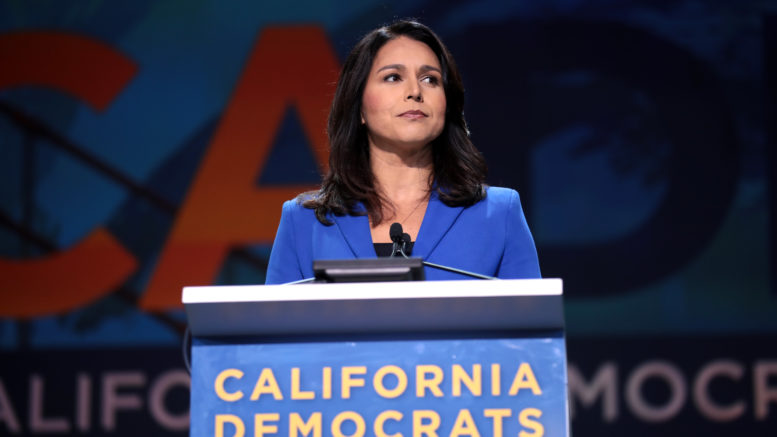 Hillary Clinton camp accuses Rep. Tulsi Gabbard of being too cozy with Kremlin

Why in the world are some big-name Democrats going after Rep. Tulsi Gabbard, who is barely a blip in the polls for the party’s presidential nomination?

Because they fear they’ve lived this nightmare before.

In the run-up to the 2020 election, some Russian news sites and social media accounts are boosting Gabbard, an Army National Guard veteran who was elected to the U.S. House from Hawaii in 2012.

So now, some Democrats are apparently worried that another anti-war, anti-establishment candidate like Gabbard might attract and distract progressive voters in California and other states—especially if a moderate such as former Vice President Joe Biden is the Democratic nominee—and put Trump back in the Oval Office.

It was Clinton, herself, who made this concern a big deal by saying Oct. 17 that she believes that Republicans have “got their eye on somebody who is currently in the Democratic primary and are grooming her to be the third-party candidate. She’s the favorite of the Russians, they have a bunch of sites and bots and other ways of supporting her so far, and that’s assuming Jill Stein will give it up, which she might not, because she’s also a Russian asset.”

Gabbard says she’s outraged by what she calls a smear campaign. She quickly slapped back on Twitter, calling Clinton “the queen of warmongers, embodiment of corruption, and personification of the rot that has sickened the Democratic Party for so long.”

In a later interview on the “Angry Americans” podcast, Gabbard said the Clinton camp is targeting her because she backed Sen. Bernie Sanders in 2016 and because she opposes “regime change” wars supported by Clinton, George W. Bush and the foreign policy establishment. Gabbard also said she doesn’t want support from Russia or any foreign government, but refused to call Russian leader Vladimir Putin an “enemy” because that escalates the chances of war.

Despite what happened in 2016, Clinton’s warning may be backfiring. She’s giving Gabbard a burst of attention and is being criticized for trafficking in Trump-like conspiracy theories. On Oct. 21, Trump defended Gabbard, saying that Clinton is accusing everyone of being a Russian agent.

Still, Gabbard has given Democratic leaders cause for concern. She has been critical of the Democratic National Committee and the “corporate media” and has been praised by commentators on Fox News and other conservative media outlets. On MSNBC on Nov. 3, she repeated some Republican complaints about the impeachment process against Trump.

She announced on Oct. 25 she will not seek reelection to Congress and vows to take her campaign all the way to the convention. But if she doesn’t win the nomination, she has repeatedly ruled out a third-party or independent run.

So far, the publicity hasn’t translated into significantly more support for Gabbard. A campaign spokesman wouldn’t say whether the clash with Clinton had helped Gabbard’s fundraising or detail the number of volunteers and staff in California.

Be the first to comment on "A Russian ‘nesting doll?’"