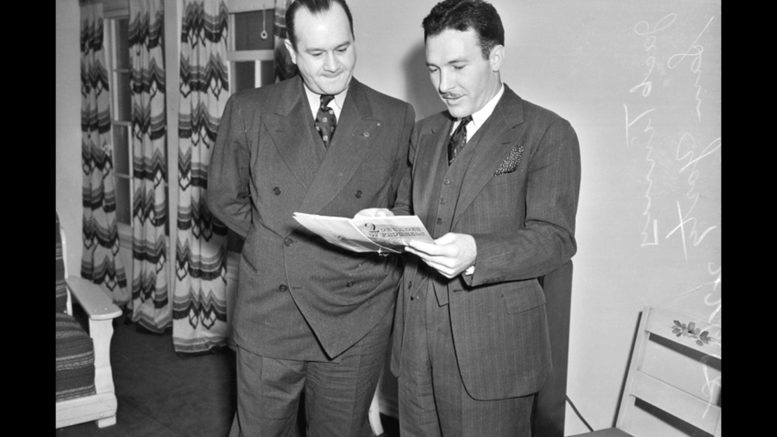 It was 2015, and Mabie had recently joined the Office of the Secretary of State as its chief deputy. Along with administering elections, enforcing campaign rules and regulating business entities, the office also acts as the keeper of the California State Archives, a vast trove of time-weathered records, photographs and miscellanea stored in a polished white Mediterranean-style building on O Street.

In downtown Sacramento, history hides in plain sight, waiting for someone to visit.

Mabie had a plan to tweak that process for the 21st century.

“I wanted to digitize all of our exhibits so that anyone could go online and learn more about California,” he explained in an email.

A conversation with a state archivist tipped him to the densest mass of raw material that hadn’t yet been curated into an exhibit. It had to do with a sinister-sounding body called the California Un-American Activities Committee, or CUAC. Mabie volunteered to take it on. Four years later, his work is complete.

The result is California Witch Hunt, an engrossing digital exhibit made in concert with Google Arts & Culture. The three-part thriller chronicles CUAC’s shady first act, from its birth nearly 80 years ago with the United States on the verge of entering World War II, during a time of powder-keg paranoia and political opportunism. This was McCarthyism before McCarthyism, when false patriots such as CUAC Chairman Jack Tenney used the term “communist” to bludgeon enemies and scapegoat minority communities.

Told in a series of synopsized and mimeographed slides, the exhibit captures what it would feel like to descend into an online rabbit hole curated by conspiracy-noir novelist James Ellroy, with an odious central villain, power-hungry bit players, countless celebrity cameos and an unexpected redemption arc in the final act.

But while this saga may hopscotch from Sacramento to Los Angeles, it’s no Hollywood-concocted delirium. In a statement from April, when the online exhibit first premiered, Secretary of State Alex Padilla—Mabie’s old boss—credited it with unearthing “a sordid period of California history,” one that almost stayed buried.

“The committee operated in the shadows for years, it spent hundreds of thousands of dollars, and it ruined the careers and lives of many California citizens—yet no one targeted by the committee was ever convicted of subversion,” Padilla said in the statement. “California Witch Hunt is a stark reminder of what happens when power goes unchecked.”

CUAC both succeeded and paralleled congressional efforts to weed out so-called dissidents and enemy agents, starting in 1930 with the communism-obsessed Fish Committee and culminating in 1945 with the granddaddy of paranoiac witch trials—the House Committee on Un-American Activities led by Sen. Joseph McCarthy.

Kathryn Olmsted, a UC Davis history professor and author of Real Enemies: Conspiracy Theories and American Democracy, said there’s a reason these committees were more focused on communism than fascism—because their leaders were “right wingers.”

“They used the threat of domestic communism as a cudgel to beat the left,” she added.

Tenney and Sam Yorty are the main figures in this tale. They both started their political lives as progressives, backing bills that supported unions and agricultural workers and made it easier to get divorced. But the lawmakers soon found their values challenged—and quickly surrendered them for political gain.

In 1938, U.S. Rep. Martin Dies of Texas, whose committee was a precursor to McCarthy’s, accused the state assemblymen of being card-carrying communists.

Tenney at first laughed off the attack, telling the Hollywood Anti-Nazi League during a rally in August 1938, “Fellow subversive elements, I have just heard that Mickey Mouse is conspiring with Shirley Temple to overthrow the government and that there is a witness who has seen the ’Red’ card of Donald Duck.”

But Tenney’s inner compass drifted the following year, when he lost an altogether different race. Tenney, a one-hit composer behind the song “Mexicali Rose,” came up short in his reelection bid for president of Local 47 of the American Musicians Union, and blamed the union’s communist members for turning against him. The exhibit quotes historian Kevin Starr, who said Tenney “returned to Sacramento a bitter man.”

After an unsuccessful mayoral run in Los Angeles, Yorty also split with the Communist Party, which didn’t endorse him as it did when he ran for the Assembly. Yorty received legislative approval to investigate alleged communist infiltration of the State Relief Administration, which distributed state and federal unemployment aid to those battered by the Great Depression, and brought on Tenney as a committee member.

The SRA hearing was a circus, but didn’t help Yorty win a U.S. Senate seat in 1940. While Yorty’s political fortunes faded, Tenney still had his Assembly seat. He used it to leverage approval for a new committee in 1941—the Joint Fact-Finding Committee on Un-American Activities in California, or what we now call CUAC. Where Tenney led the committee, Richard E. Combs acted as its enforcer, leading investigations, grilling witnesses and giving progress reports to other political bodies. The committee attracted people with axes to grind, including writer and disenchanted Communist Party member Rena Marie Vale, who supplied Tenney with a 53-page affidavit naming names and laying out recruitment practices.

Tenney also got back at Local 47, making five of its members the very first witnesses to be called to testify about supposed un-American activities and branding them agents of communism in his first report (even though it wouldn’t be illegal to identify as a communist for 15 more years). By the time Tenney jumped from the Assembly to the state Senate in 1942, he had navigated a different political transformation, the exhibit says, “from being a Democrat who had been accused of being a communist, to a Republican who accused others of being communists.”

Having vanquished the lefty musicians who spurned him, he found new liberal enemies to have infiltrated or staked out by undercover operatives. He became a stool pigeon for J. Edgar Hoover’s FBI and gathered kompromat on the era’s biggest names. Filmmakers Orson Welles and Charlie Chaplin, actors Humphrey Bogart and Katherine Hepburn, singer Paul Robeson, poet Langston Hughes, author John Steinbeck, folk singer Woody Guthrie, writer Dorothy Parker, designer Frank Lloyd Wright and future California Gov. and President Ronald Reagan all fell under his voyeuristic gaze. And while Tenney’s committee subpoenaed dozens of celebs under the threat of blacklist, it did its most lasting damage as an agent of Japanese internment and increased hostility against Mexican-Americans.

Many Californians opposed the committee and spoke out against it, often at great risk, but Tenney was at the height of his power. It would take Yorty, back from the battlefields of World War II, to bring down the tyrant he had helped create.

Mabie called the drama that unfolds in the exhibit’s third chapter “priceless,” and we won’t spoil it here.

For Mabie, who skipped lunches to play sleuth inside the archives’ cream-colored walls, the story told to him by a web of scattered files, transcripts, reports, clippings and 125,000 index cards echoes across the decades.

“Jack Tenney was not unlike Donald Trump,” Mabie reflected. “He persecuted and attacked people. He went out of his way to violate the civil rights of those he targeted. He even personally involved himself in the deportation of Luisa Moreno, a prominent Latina activist. Tenney attempted to impose on Californians his own definition of Americanism.”

The idea of what’s un-American has gotten a lot of play in recent weeks. President Trump baked the concept into his racist attacks on Reps. Ilhan Omar, Alexandria Ocasio-Cortez, Rashida Tlaib and Ayanna Pressley, four American women of color he tweeted should “go back where [they] came from.” Trump’s virulent statements and nativist rallies in which he basked in the rabid approval of his supporters are fresh reminders of what the country looks like when its most powerful person is also its ugliest.

But Trump, who separated thousands of asylum-seeking children apprehended at the border, isn’t the first to use his political office as an instrument of spite. If anything, he’s a tumorous representation of the disease we’ve left unexamined for too long.

“This was a story that was in no hurry to be told,” said Mabie, who retired in December.

Its lessons, on the other hand …

CUAC festered for 30 years between 1941 and 1971. Even after Tenney’s downfall, the committee continued to blacklist people and intimidate progressives, but didn’t go after one fascist, Olmsted noted.

“It has a real baleful legacy,” she said.

Some things you just can’t make up.

In the shadow of tyrants

Be the first to comment on "California’s ‘Un-American’ history"