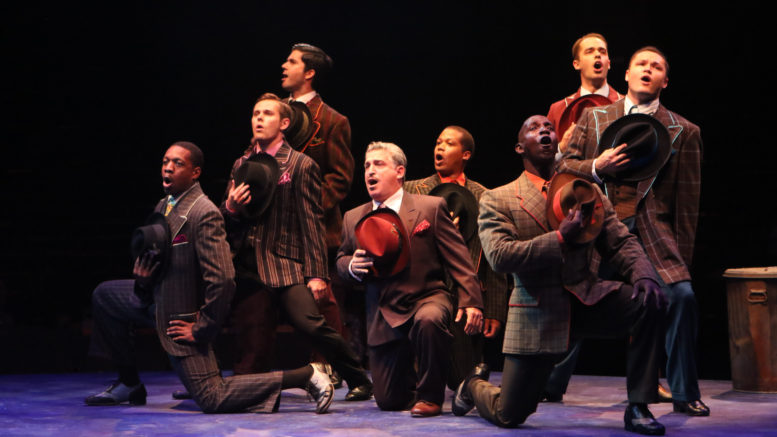 Tonight might be your lucky night, if you play your cards right. (Photo courtesy of Charr Crail Photography)

Guys and Dolls, a classic Tony-award-winning American musical, is fun, frivolous and farcical. The current production at Broadway at Music Circus is all that and more, with impressive dance numbers, familiar show tunes, a multi-talented cast, imaginative sets, great leads and a live orchestra.

This is a 1950s-era musical set in the 1940s, so it’s expected that the dapper dan is going to meet up with the sweet missionary, sparks will ignite, wooing will begin, obstacles will be put in their way and (spoiler alert) they just might end up together at the end.

The score includes “Luck Be a Lady,” “Sit Down, You’re Rockin’ the Boat” and “A Bushel and a Peck,” while the dance numbers range from tap to ballet to Cuban salsa—and this cast can really cut a rug under the direction of choreographer Michael Lichtefeld.

Director Charles Repole takes on the daunting task of staging a musical on Music Circus’ theater-in-the-round stage, which means all props must be dropped down or hauled on stage, and all actors must play to a surrounding audience while entering and exiting down the theater aisles.

This Guys and Dolls ain’t for fuddy-duddys—more for eager beaver musical theatre lovers.

Be the first to comment on "Hitting the jackpot"