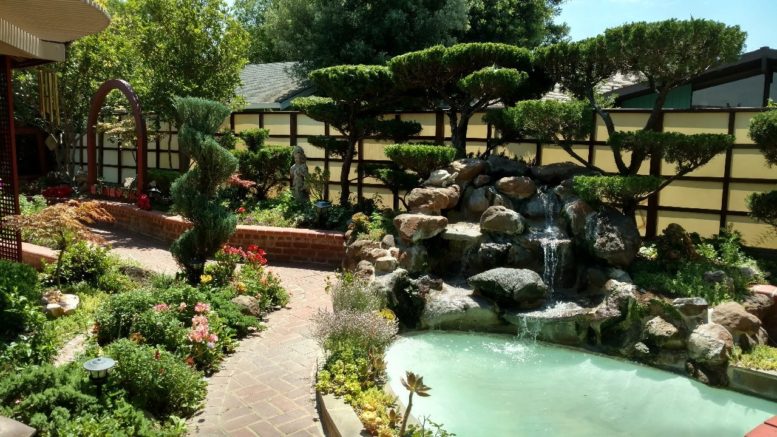 Huei Young opens her Davis garden for tours to raise money for Shriners Hospital for Chidren. (Photo by Debbie Arrington)

Starting with a bare lot at a new home, Huei Young planted her paradise, one piece at a time.

For almost 50 years, she methodically added sculptured trees, shrubs, flowers and more to her vision of a zen oasis. A waterfall feeds a series of small ponds, crossed by a charming red bridge. A stone path winds around rocks and statuary. Large red lanterns and mirrored fences add light and sparkle.

Her feng shui garden looks like it came out of a painting. In a way, it did.

“My father was an artist,” Young explained. “He got me interested in gardens when I was very, very, very young. He always say, ‘What you see is in your mind.’ I became very good at design because of imagination and passion; you have to have passion to do anything well.”

Her father, J.S. Liu, was a famous painter and calligrapher in Taiwan who died in 1984. His work continues to be part of her inspiration.

“My father tell me, ‘Remember: I teach you how to do art. Do it slowly, slowly.’ That is how I do this garden; I’m still changing things,” she explained. “I told my father, ‘You will be so proud of me some day.’ I did it; I know he would be proud.”

Featured in magazines and on HGTV, “Huei’s Garden” has become internationally famous. Besides being her own source of joy and peace, she uses her garden to help others. Young opens her private garden to groups for tours to raise money for local charities. A $25 donation includes her homemade Asian refreshments as well as time in the garden.

Shriners Hospital for Children in Sacramento has been a major beneficiary. Over the past five years, tours of her garden have raised thousands of dollars for the hospital’s comprehensive Cerebral Palsy Program.

“I raised $5,000 in three hours,” Young said proudly of her April Shriners tour. “It makes me feel so good. The garden has helped me help so many children.”

“I have been here almost 50 years,” Young said while looking out over her backyard oasis. “This garden has become a landmark in Davis. I turned nothing into something. This is a labor of love.”

Along with her Asian-inspired backyard, starting in 1980, Young turned a long stretch of the public bike path next to her home into a flower-filled parkway. At her own expense, she planted and maintained hundreds of shrubs and perennials under the city’s redwoods.

A broken water pipe prompted Young to reach out to city leaders for an assist. Last week, a contingent of Davis officials visited her garden to find out how they could help Young’s one-woman beautification efforts. Among those she hosted were Davis Mayor Brett Lee, city manager Mike Webb and parks superintendent Martin Jones.

The city is starting with free mulch.

When children take the stand

Be the first to comment on "A one-woman, world-famous garden"