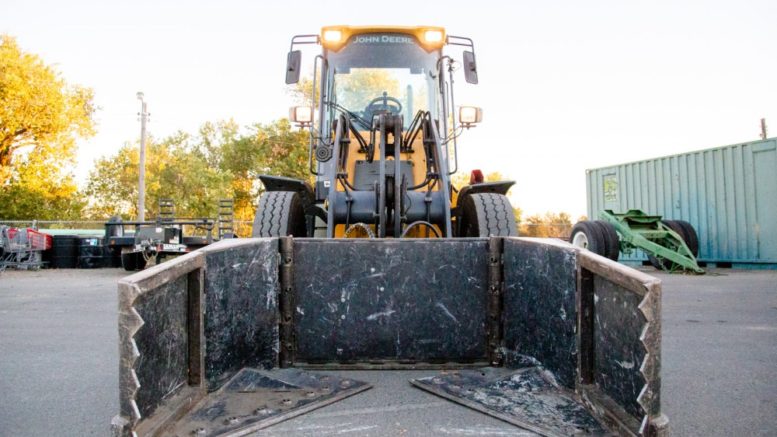 Many Sacramento gardeners welcome the return of The Claw to collect their green waste. (Photo courtesy of the city of Sacramento)

Scraaaape! “The Claw” is back and it’s music to my ears.

As a Sacramento homeowner and avid gardener with lots of leaves and bushels of prunings, I’ve come to love The Claw, the unique tractor with the articulated scooper arm. It’s one of the benefits of living in Sacramento: Curbside pickup of garden gleanings that overwhelm the green waste container.

I’m not alone in my appreciation.

Now through Jan. 26, Claw crews will work the streets of Sacramento six days a week, methodically scooping up the City of Trees’ abundant accumulation of leaves and other green waste.

“It’s one of the unique things about living in the city is The Claw,” Treadwell said. She said while Portland does something similar, it’s only two days a year.

By city code, Sacramento residents have had permission to pile leaves in the street since 1945. For decades, those piles were collected by hand with street crews using brooms and buckets. A faster method for picking up loads of leaves, The Claw has been in service for about 40 years.

Sacramento uses about 10 Claw crews Monday through Thursday and 15 Claw crews Friday and Saturday, days without regular trash collection. The crews rotate through 93 zones until the entire city’s piles are picked up. Then they start over again.

November and December produce the majority of leaves: 23,000 tons were picked up by The Claw during those two months last year. That was a wet winter, and rain weighed down the foliage like soaked towels. Those same two months totaled about 18,000 tons in 2017, when dry leaves were much lighter.

Most Sacramento residents should expect seven sweeps down their street by The Claw between Nov. 1 and Jan. 26, Treadwell said.

Residents can get a pickup estimate via the city’s leaf season webpage. On the SacRecycle collection calendar link, insert your address and get a target date for your street, within three days. The Claw schedule is updated twice daily.

During light leaf weeks, The Claw crews can complete their citywide schedule in 10 to 12 days. Wet and windy weather can bring down masses of leaves, especially early in November if there hasn’t been a major leaf drop. That almost doubles the time estimate for completing a city sweep.

Meanwhile, the city continues to pick up residential green waste containers on a weekly basis. Fill those 96-gallon bins before piling leaves in the street. That helps keep curb space open for parking, the biggest complaint during leaf season.

“If people use their bins first, we can clear the streets faster and there’s more parking,” Treadwell said.

If a heavy rain is expected, move leaf piles out of the street and onto the lawn, Treadwell suggested. That keeps leaves from clogging storm drains. Keep piles out of gutters and bike lanes, too.

“It only takes four or five well-placed big leaves to clog a drain,” she said.

Be the first to comment on "Return of ‘The Claw’"