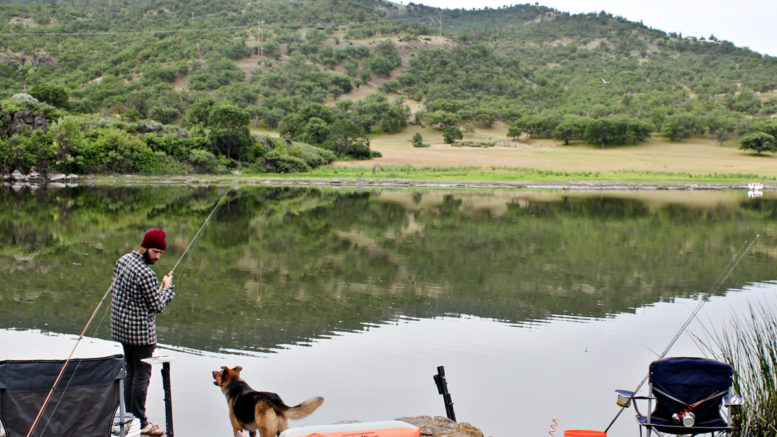 Jacob Montgomery fishes with his dog at a campground near Iron Gate Dam on the Klamath River in May. (Photo by Tess Townsend)

Can individual choices help save the planet? Or is the system too rigged?

Fishing isn’t supposed to be as easy as dipping a hook into water and pulling out a fish. I’m told it’s an exercise in patience, and that you’ll often come home empty-handed.

But those insights do not describe my experience on a recent camping trip near the Oregon border. There, in a reservoir on the Klamath River, yellow perch—a species not native to California—thrives in water made artificially still by Iron Gate Dam. And the fish are all too eager to snap at silicone lures on the ends of fishing line.

The trip is an annual pilgrimage by my partner and his friends, an outdoorsy group, many of them research biologists. Teejay O’Rear, the mutton chop-bearded 40-something who started the tradition, said he collects a large proportion of the fish he’ll eat at home for the next year when he goes. (He could not make it this year.) He tries to only eat meat he’s hunted himself. Others on the trip follow a similar year-round rule.

“Probably by proxy a lot of my vacations are sustainable,” says O’Rear. That’s partly because of his overall lifestyle, and partly because his idea of a vacation is to “shed as much civilization as possible.”

During what some experts are calling not just climate change but a climate crisis, there’s something very attractive about vacationing in a way that doesn’t feed doomsday projections. Since last summer, the United Nations has issued one report saying one million plant and animal species are currently at risk of extinction and another saying humans must reduce greenhouse gas emissions drastically in the next decade to avoid worst-case global warming projections.

The trip to Iron Gate was presumably as green a vacation as one could take.

We slept in tents, gave up showers, fished a sustainable food source and did it all a few hours by carpool from home. Compared to flying to a hotel or resort with electricity and running water, we spent this long weekend of camping consuming a fraction of the energy and resources.

But I had this nagging feeling that it would be irresponsible to hold up the trip as an eco-friendly model.

For starters, to make any measurable difference in your impact on the environment, you have to make sustainable choices throughout the year, not just during vacation. This is not the norm in an economy that rewards bad choices for the planet by making them faster, more accessible and often cheaper. On top of that, industry practices and public policies also determine how humans impact the environment.

Many parts of the trip reflected the eco-unfriendly system in which we live. We stored our fish fillets in plastic bags, a petroleum product. We brought food packaged in plastic. We used plastic coolers. We cooked with portable kerosene stoves. Some of us threw down fishing lines weighted with lead sinkers. We drove to the campsite in fossil fuel-powered cars.

And we camped on a man-made reservoir that dramatically altered the ecosystem from its natural state, making the entire trip possible.

A common sight at our tent compound was campers filleting dead fish, a process that left the wooden picnic table strewn with fish guts as a container of carcasses steadily filled at each sitting.

What made that image so frequent was the abundance of yellow perch, a fish native to the Northeast and Midwest that has thrived in the man-made reservoir. Iron Gate Dam interrupts the flow of the Klamath River, creating a 944-acre reservoir that is “lake-like” and warmer than if the river were allowed to flow unimpeded, says fisheries biologist Peter Moyle, a distinguished professor emeritus at UC Davis.

How exactly yellow perch got into the Klamath River isn’t clear. Moyle said the now-defunct U.S. Fish Commission introduced the fish to the Central Valley near the turn of the 20th century. “It disappeared from the Central Valley and then mysteriously appeared in Copco Reservoir,” just north of Iron Gate on the Klamath, in 1946, he said.

This would have been after the predecessor to utility company PacifiCorp started building dams on the river in 1903, but before it completed Iron Gate in 1962. PacifiCorp owns seven dams on the Klamath, which the company website says provide “enough power to supply the energy needs of approximately 70,000 households.” That’s about 15 percent of all the hydropower produced by the company, according to spokesperson Bob Gravely. PacifiCorp also generates energy from coal, natural gas and wind.

Dams are often controversial. On the one hand, reservoirs help irrigate land and store water for human needs. Hydroelectric dams produce a renewable source of energy when reducing greenhouse gas emissions is critical.

However, dams harm river ecosystems and aging dam infrastructure poses a flood risk. Dams on the Klamath River interrupt the migration of native Coho and Chinook salmon. Coho are listed as threatened under the federal Endangered Species Act on the Klamath River in California, and there is a petition to list spring-run Chinook as threatened or endangered in a portion of the river. The relatively still and warm water in the reservoir makes the river more prone to toxic algae that Moyle says can kill small fish as well as invertebrates that fish eat.

“The dams are ruining the river and they are basically making the river sick. And because the river’s sick, everything that’s dependent upon the river is also sick,” says Amy Cordalis, general counsel for the Yurok tribe.

The lower Klamath runs through the Yurok reservation and is intricately woven into the tribe’s history and culture. Cordalis says when toxic algae blooms happen, though, “nobody can touch the river.” That means no swimming for humans or pets, and no fishing. The kind of toxic algae that grows on the Klamath has been known to kill dogs.

Four dams on the Klamath, including Iron Gate, are scheduled for removal in 2021 after extensive efforts by the Yurok and Karuk tribes, environmental nonprofits and government agencies, and the cooperation of PacifiCorp. Plans for removal still require federal approval, and the Board of Supervisors in Siskiyou County, where three of the four dams are located, opposes removal. In letters to the California Water Resources Control Board, the county says removal could negatively impact the environment and cause flooding, “in addition to socioeconomic impacts on the local community.”

“As a matter of fact, it’s great to harvest them,” and makes little difference for the overall yellow perch population in the reservoir, Moyle says.

O’Rear says that when he goes to Iron Gate, he usually brings back between 150 and 200 fish. “That’s at least six months of dinner meat,” he says.

But Moyle also says, “You’re just taking advantage of an unnatural situation.” The fish are only able to thrive at Iron Gate because a dam creates an artificially favorable environment. Remove the dam and the yellow perch will disappear from Iron Gate Reservoir, though they’ll still remain in some other portions of the river.

Yet removing the dams still won’t result in perfect restoration of the original environment. The Klamath River will still warm due to climate change, though that the increase will be smaller and slower than if dams remain in place, according to a 2011 report by the U.S. Geological Survey.

This paradox of yellow perch as a sustainable food source that’s contingent on a damaged natural ecosystem reflects how any individual choice made with sustainability in mind still balances on top of a highly engineered, extractive system.

A more clear-cut example is choosing among different transportation options when you travel.

“We’re choosing between bad carbon intensive options because that’s what we have,” says Lisa Aultman-Hall, a University of Vermont engineering professor who studies long-distance travel.

An “average” car with five passengers is more energy efficient than a Boeing 737 with roughly 160 passengers, and a full bus or train is more efficient than both, she says. But you’re still contributing to greenhouse gas emissions. Electric vehicles are generally better for the environment, but even then just how much better depends on where that electricity comes from.

While pursuing a sustainable lifestyle is worthwhile, individual actions in isolation will not determine the future of fossil fuel consumption and other activities impacting the planet. What will determine that future are policies and regulations and collective action, similar to the collective action that is leading to the planned dam removal for the Klamath.

The last morning of the camping trip, my partner and I took his canoe out on the reservoir to fish. Our boat floated over the still water toward a small cove. I dipped a luminescent white lure into a cluster of seaweed, quickly catching fish after fish.

Later I told Moyle how surprised I had been at how easy it was to hook yellow perch. According to historical records, he said, it was once just as easy to catch native salmon.

Squeeze in and don’t go far.

To limit energy use, trip distance and number of people in a vehicle matter more than mode of travel, says Lisa Aultman-Hall, a University of Vermont engineering professor who studies long-distance travel. In general and assuming all seats are filled, options rank from best to worst: train, bus, car, airplane.

“The shortest trip is the optimal trip in terms of absolute energy, there’s just no sugar-coating that,” says Aultman-Hall. Also, try public transit while traveling in a different city.

Try to find out what hotel or other accommodation options are doing to have a more positive impact on their environment and community, says Samantha Bray, cofounder and executive director of the Center for Responsible Travel.

Factors to consider include how they dispose of trash and whether they use a sustainable source of electricity. Also think of the economic impact: Does the place pay local taxes and does staying there limit housing options residents?

Look for locally sourced, sustainable food. If you’re camping and cooking and expecting sunshine, ABC 10 meteorologist Monica Woods suggests bringing a solar cooker to cut down on your use of kerosene or charcoal.

Dispose of waste properly, camp only in designated areas, don’t bother wildlife, stay on paths and well-trodden ground and follow rules and regulations. If you’re fishing or hunting, use lead-free sinkers or ammunition. Visit LNT.org to learn about the principles of “leave no trace” and guidelines for specific activities.

You are more than a consumer.

If you care enough to make sustainable choices while you’re vacationing, you should do the same in daily life. Still, systemic change is needed to make a real difference. To have a lasting impact, don’t just think about your choices as a consumer but think about your role in a democratic society.