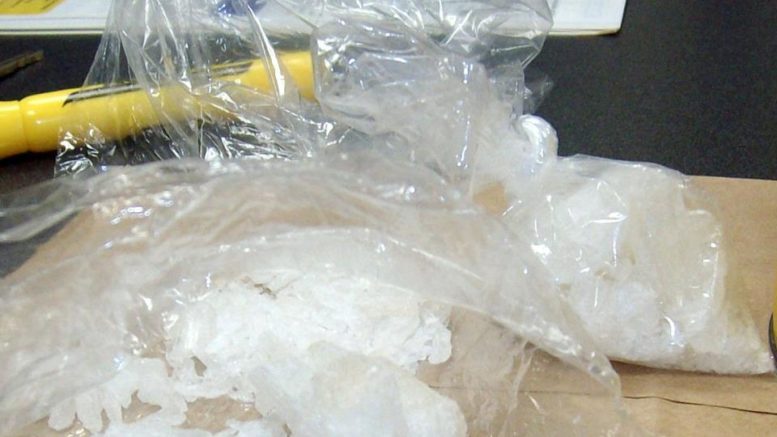 Seizures for trafficked methamphetamine in Northern California jumped in 2018.

Ten minutes before sunrise, the team hit the house.

“In the garage, the search team found equipment and chemicals used to adulterate or purify methamphetamine,” FBI special agent David Sieber wrote in his report.

It was Sept. 6, 2018. Saeteurn was charged in the U.S. Eastern District Court of California with intent to distribute methamphetamine and possessing firearms in furtherance of drug trafficking. He pleaded not guilty.

Saeteurn’s house is on the edge of the “Fruitridge finger,” a jurisdictional mish-mash of neighborhoods inside and outside the city of Sacramento where violence is common. Methamphetamine is no stranger nor friend to the area.

Federal agents say cases such as Saeteurn’s signaled an increase in meth trafficking throughout Northern California last year. For county Supervisor Phil Serna, who has spent years trying to bring resources to the Fruitridge finger, meth’s resurgence is bleak news. Serna is convinced the drug is a key driver in disintegrating families and futures throughout his district.

In February 2017, Serna had a more direct epiphany about the stimulant. He said he and a social worker were doing outreach in a homeless camp when they ran into a 26-year-old woman who was in her third trimester of pregnancy. They tried to get her out of the weather and into a shelter, but she refused to go. When Serna asked why, he said the woman admitted she didn’t want to be cut off from her meth dealer.

“I was literally depressed for a few weeks after that,” Serna remembers. “The fact that she wouldn’t get help, the fact that she was using meth while pregnant. It’s something I’ll never forget.”

Now, Serna is supporting a new county coalition designed to heighten awareness of methamphetamine and find broader strategies to treat those addicted to it. County leaders know what the problem is, but now they’re seeking a solution. Despite a growing focus on the opioid crisis, meth remains Sacramento’s biggest drug threat.

“I don’t want this to get lost,” Serna said. “We have to keep making people aware that this isn’t getting better. It’s getting worse.”

Blue lights were beaming as federal agents smashed through the door.

The house in Del Paso Heights had been under surveillance for months by the U.S. Drug Enforcement Administration. Forcing their way in, agents allegedly caught Andre Washington dumping white powder from Ziploc bags into his toilet. One investigator, Special Agent Maxim Lashcuk, documented that he soon came across a 9-millimeter handgun, 968 grams of crystal methamphetamine and a child living inside the house.

Later that same morning—March 15, 2018—agents sat watching a house off Northgate Boulevard. It was the residence of David Garcia Ramero, whom the DEA contends was Washington’s main supplier. Ramero got into his car and was soon pulled over. With a warrant in hand, the agents popped his trunk and allegedly found a bundle of cash, an electric money-counter, three pistols (including a Glock with a silencer and its serial number scratched off) and 37 pounds of crystal methamphetamine.

Washington and Ramero face multiple felonies of trafficking meth in federal court. They both pleaded not guilty.

Each man was also charged with dealing smaller amounts of cocaine and, in Washington’s case, crack. But meth is the main product they’re accused of moving from South Hagginwood to Old North Sacramento. That fits into an unsettling trend the DEA has documented around the state.

“Meth has always been king in California,” said DEA spokeswoman Casey Rettig, a 21-year veteran of the agency. “But we have seen an increase in distribution lately.”

In the territory that Rettig’s team covers—spanning Central California up to the Oregon border—there was a 500-pound jump in DEA seizures of methamphetamine last year. That doesn’t account for seizures by other federal, state or local law enforcement agencies.

Rettig said that, in both 2016 and 2017, meth seizures for her division were less than 1,300 pounds annually. Then in 2018, with similar operations and using similar tactics, seizures jumped to 1,821 pounds. That means more drugs hitting local streets.

What’s the impact around the capital?

One of the goals of the new Sacramento County Methamphetamine Coalition is to find out. The coalition has already noted its drug-endangered children. According to the Sacramento County Family Drug Court’s 2016-17 annual report, methamphetamine was the No.1 drug that parents were addicted to when enrolling in various programs to keep or regain custody after a child endangerment investigation.

And it’s not just neglect and abuse cases the drug is influencing. According to the county’s 2017-18 fiscal year report, 52% of people receiving treatment for methamphetamine addiction are also entangled in the justice system, in many cases for more than simple drug possession. The region’s law enforcement agencies have issued press releases this year on individuals arrested for burglary, identity theft, check fraud, hit and run and gun crimes, who allegedly possessed methamphetamine.

For Rettig, what’s as noteworthy as the amount of meth being trafficked is its generally high potency at bargain bin prices.

One place the ugly reality of methamphetamine use plays out is in emergency rooms, where doctors and nurses watch people experience hallucinations, paranoia and often perilous levels of agitation.

“In our South Sacramento emergency department, we probably see three or four people who fall in the category of experiencing meth pyschosis per day,” Offerman said. “They can be quite dangerous to themselves and to the health-care providers trying to help them.”

Offerman added that firefighters and police officers sometimes have to hold down a patient while hospital staff apply restraints. The patient is then given a sedative while their body struggles to metabolize the methamphetamine. In time, doctors can try to evaluate the situation, since it’s also not unusual for people suffering from long-term mental illness to self-medicate with drugs, including methamphetamine.

“From a practical standpoint, someone with an acute toxicity of meth in their system can present symptoms identical to someone suffering from schizophrenia,” Offerman said. “It can take some time to tease the two apart.”

Offerman says that while doctors have long recognized some crossover between mental illness and drug use, recent studies suggest the broader relationship may go well beyond self-medicating.

“If you look at the research on methamphetamine when it’s used chronically, and some of the neuroimaging studies that have been done, it causes structural changes in the brain,” Offerman explained. “If you’re using meth and slowly reorganizing the architecture of your brain, there’s a pretty good chance it can cause mental illness. … It’s probably the worst thing you can do for your body. It outstrips every other drug.”

Meth’s larger footprint at local hospitals is one of several alarming trends county officials began noticing in 2016. Lori Miller, division manager for alcohol and drug services at the county’s Behavioral Health Department, said that 37% of people who seek detox and outpatient treatment are addicted to methamphetamine, compared to 16% to opioids.

Meth requires different treatment than opioids because there are no step-down drugs, such as suboxone, which an addict can use to wean themselves from heroin, Miller noted. The new coalition will try to devise better outreach strategies to get more addicts into treatment programs that can include cognitive behavioral therapy, motivational guidance and trauma-informed care. The group is also working on identifying new state funding sources to expand those services.

For Serna, the coalition’s mission is a top priority.

“This is a scourge,” he said. “For too long we’ve been racking our brains around how to make a difference.”

Be the first to comment on "A crystalized crisis"