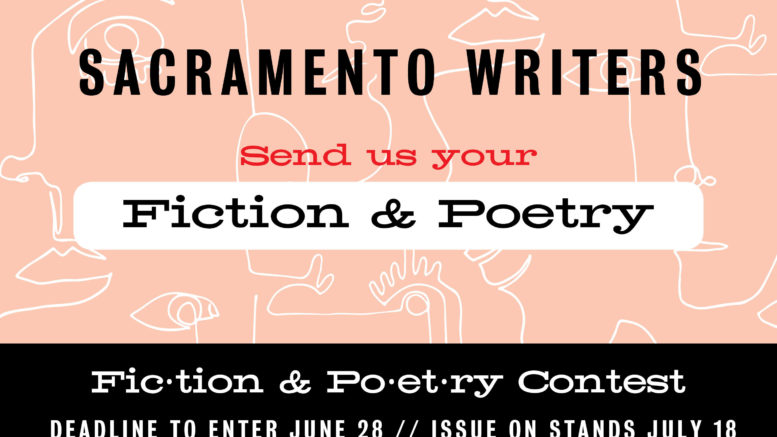 SN&R is having a fiction and poetry contest, and the winners will be published on July 18. See the rules for entries below.

Lots of journalists daydream about writing the next great American novel, and I’m no different.

Over the years, I’ve had a few ideas. In high school, I started a short story called “Soundtrack.” The main character hears songs in his head that somehow predict what happens to him, which forces him to wrestle with a big question: Do the songs determine the course of his life? Or does he make decisions based on the songs?

In 2016, during a trip though Spain, I thought about writing about a tourist who goes to museums and keeps spotting a mysterious girl in a flowered dress, who disappears before he summons the courage to talk to her. It would be a bittersweet story about unrequited infatuation, and also a travelogue through Europe’s great art museums, including the Louvre in Paris and the Prado in Madrid.

(Not that these are such incredible ideas, but if anyone uses them, I’d like a share of the book and movie royalties, please.)

I’ve never been committed enough, however, to actually finish a short story, much less a novel. Besides, I’m self-aware enough to realize it’s no huge loss for the literary world that I haven’t published any fiction.

So I’m perfectly fine sticking to news and opinion and being in awe when I read a great novel that creates its own world, that puts me in the minds and hearts of characters and that keeps me turning the pages with a compelling plot. And we all know that Hollywood is in desperate need of fresh material for movie screenplays and TV scripts so it doesn’t keep regurgitating rotten sequels and churning out B-list comic book heroes.

All of this is a prologue to announce that if you’re brave enough to put your writing out in the world, we’d like to help.

On July 18, we will publish a Fiction/Poetry Issue featuring the winners of what we hope will become an annual contest.

Here are the rules on entries, which must be original and previously unpublished:

Subject: They must be about Sacramento, or set in Sacramento.

Categories: There will be four. The first part of a story or novel at a maximum of 500 words. Flash fiction of 100 words or less. The best opening line. And poems of as many 250 words.

Format: Send your entry as a Word document or a PDF, or place it in the body of your email to fictioncontest@newsreview.com with the category in the subject line. Be sure to include your name and a daytime phone number.

Deadline: Entries are due by noon on June 28.

Unlike our College Essay contest, there’s no fortune for the winners. But there could be fame. Who knows? Maybe the exposure on our pages will be the first step to becoming the next great American novelist.

Be the first to comment on "Editor’s note: Calling all writers"