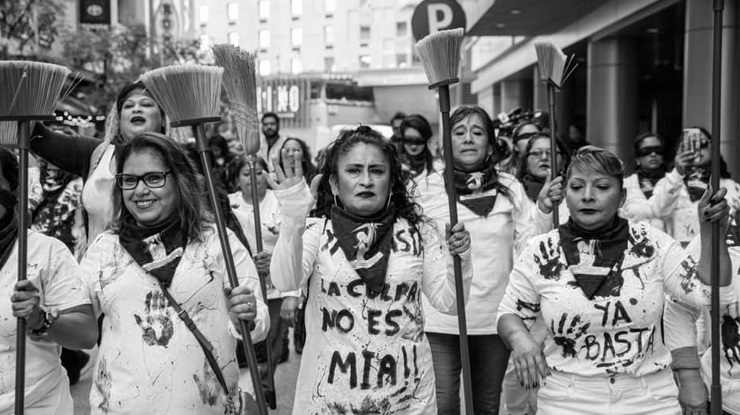 Imagine your job is to clean up somebody else’s mess. You work long hours, often late at night by yourself. You are isolated, vulnerable and on your own. If attacked, there is no one to hear you scream.

Imagine your job depends on how you look, not what you do or how well you do it. You’re treated like a thing, not a person. Your boss feels free to force you to do anything: Work off the clock, dress provocatively, accept harassment – or worse. You fear if you object that you could be fired – or deported.

Then, imagine having someone who could help you gain power to end such abuse and assure you a better work environment with more pay, more benefits and a better life. That’s the protection a union can offer.

Sunday is International Women’s Day, a global celebration of the social, economic, cultural and political achievements of women. Unions have been a big part of that success story. Unions help narrow the gender pay gap. On average, women in union jobs earn much more than their non-union counterparts, particularly in right-to-work states and for women of color. According to federal statistics, Hispanic unionized women earn 42% more than their non-union sisters. Black women in unions earn 33% more.

It’s not just about the dollars. Union women are much more likely to have employer-paid health insurance. Women in unions have fought for and won sick leave to care for children and parents — so important since the job of caring for our families disproportionately falls on us. We have pensions and retirement benefits. And we have life-changing protection — against assault, harassment and unfair rules.

I want to mention how we are fighting to change sexist and racist labor practices in two industries. First, we are getting rid of tipped wages. What’s wrong with tipping? The problem is, in 43 states, restaurants can pay people well below minimum wage, $2.13 vs. $7.25. It’s no coincidence that 70 percent of those jobs are held by women, and the restaurant industry has the highest rate of sexual harassment and low unionization.

Tipping, an American custom dating back to the 1860s, bakes racism into our culture. As Black freed slaves found jobs as restaurant workers, hotel workers and railroad porters, their employers paid them no wages; instead, tips became their compensation. It was as if they were still slaves. Hotel workers and porters unionized, leaving restaurant workers non-unionized and still dependent on tips to make up subminimum wages.

California is one of the progressive states that eliminated this two-tier practice. In states without lower minimum wages, sexual harassment of waitstaff goes down by 50%.

SEIU has also fought for unionized workplaces to be free of sexual assault and harassment. For thousands of female janitors, the threat of rape on the night shift is real.

Locally, SEIU-United Service Workers West represents more than 45,000 janitors, security officers and airport workers statewide who help keep California clean and safe. USWW includes many brave women who have been fighting against rape on the night shift. They won peer-to-peer training of their co-workers to help end sexual assault and harassment in the workplace. They also won the creation of a statewide registry to ensure that companies go through anti-harassment training.

Courageous women marched, spoke out and fasted to win these recent gains. And we are joining them now in Sacramento to support their contract campaign, which I will be talking more about in the coming weeks.

Because union women are stronger together.

The court of public opinion

The problem with K.J.’s comeback

Be the first to comment on "Yvonne R. Walker: Celebrate women and power of change"