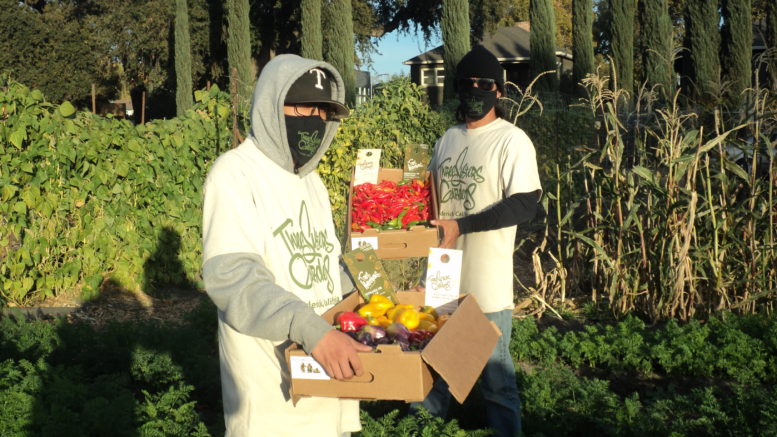 A believer in “Educate, Don’t Incarcerate,” Alfred Melbourne (right) has turned his motto into action by mentoring youth like Miguel Lopez (left) at TSG farms in West Sacramento. Photo taken at TSG farm on 5th Street. Photo by Edgar Sanchez

In March 2016, Alfred Melbourne walked out of Wasco State Prison in Kern County—free at last. He had served 18 years for assault with a firearm and assault with a deadly weapon.

Eager for a new start, Melbourne immediately returned to West Sacramento, his hometown.

He repeatedly asked a local agency for a job—any job. “Three times I was told to check back later,” recalled Melbourne, 43, a Lakota Sioux. “The fourth time I was told I would have to create something on my own.”

That’s exactly what Melbourne did.

In May, 2018, he founded a network of organic farms in West Sacramento, where youth learn to cultivate the soil, be law-abiding and give back to their community.

The nonprofit venture took root on a donated plot formerly occupied by a Christian church that burned down. The endeavor has grown to three more farms, two of them part of the incubator farm program of the Center for Land-Based Learning in Woodland. The fourth operates under a memo of understanding with the International Rescue Committee.

Named Three Sisters Gardens, or TSG, for the traditional Native companion plants of corn, beans, and squash, they total a combined 1.15 acres, with the biggest just under a half acre.

They produce a cornucopia of healthy veggies year-round, from lettuce and carrots to radishes, most of which are given to people who are in need.

“Technically, it was an open vacant lot,” Melbourne said of the hard, uneven former church grounds that gave birth to his bountiful enterprise. The project required patience, a virtue he had acquired in prison.

“As far as technical knowledge, it was hands-on learning,” said Melbourne, who also took farming classes through the Center for Land-Based Learning.

Besides feeding the hungry, Melbourne had another priority: helping youth avoid the school-to-prison pipeline, in which students of color are set up for failure.

He and other TSG volunteers currently mentor 10 youth, including Miguel Lopez, 17, a part-time TSG worker.

In two years, Lopez has mastered organic farming, from how to plant vegetables to how to spread nutrients on the soil.

“This will teach you more than a school,” said Lopez, a senior at Heritage Peak Charter High, as he toiled at the TSG farm on 5th Street.

While undecided about a career, farming remains an option for him. Melbourne, Lopez said, also taught him to respect all people.

“I like Alfred,” he said of his mentor. “After everything he’s been through, he’s trying to show a different path for the youngsters.”

TSG is supported by The California Endowment and the Yocha Dehe Wintun Nation.