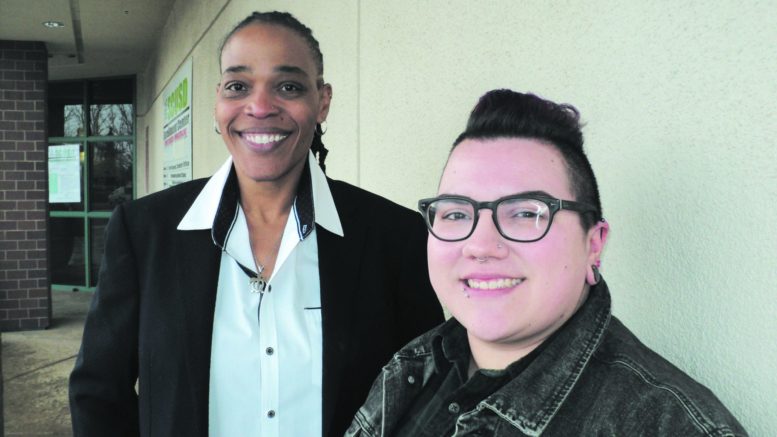 The Sacramento City Unified School District has made tremendous strides in accommodating transgender students, said Nichole Wofford, director of its Connect Center, shown with Danny Buffington, a youth and family mental health advocate at the Center. Photo by Edgar Sanchez

For students whose gender identity differs from their assigned sex, the name on the attendance sheet may not reflect who that student really is.

Youth in the Sacramento City Unified School District now have a way to address that issue thanks to a simple sheet of paper.

The district’s Name and Gender Update Form allows students to change their legal names to their affirmed name, which will be used by school staff and appear on school records. At 18, students can independently seek permanent legal name changes through the courts, effectively changing all of their legal documents.

This form was developed by the district’s Connect Center, which receives support from The California Endowment. Seventy-one students have completed the form since 2016.

“The idea of coming to school and being recognized for who they are, rather than the gender they’ve been assigned, is quite meaningful for our transgender youth,” said Danny Buffington, a Connect Center Youth and Family Mental Health Advocate.

“The idea of coming to school and being recognized for who they are…is quite meaningful for our transgender youth.”

The Sacramento City Unified School District has made great strides in accommodating transgender students, according to Nichole C. Wofford, a licensed marriage and family therapist/social worker who manages the district’s Connect Center.

Since its opening in 2011, the Connect Center has been a gateway to a range of critical support services — both in-district and through community partners — for 47,900 students and their families.

“When I first started at the Connect Center, we had transgender students but no district policy to protect them,” Wofford said.

“At that time, some of the primary concerns were around bathroom and locker room usage,” she said. “Students were being told they needed to use restrooms and locker rooms which corresponded with the gender they were assigned at birth.”

Without a state law or school district policy to protect them, transgender students’ rights were not being recognized and many school principals were frustrated, with no policy/law to guide them.

“For the most part, school administrators wanted to support the transgender students” as the Connect Center had requested, Wofford said. “But if there was pushback from parents

who opposed the new state law (AB 1266) or the district transgender policy — administrators wanted something that they could point to and say, ‘This is what we need to do.’”

A law known as the School Success and Opportunity Act (AB 1266) solved the crisis, effective Jan. 1, 2014. Among other things, it requires that California public schools give transgender students access to facilities and programs that match their gender identity.

Since December 2013, the district has had its own Transgender and Gender Non-Conforming Student Policy, which contains specifics on how to accommodate transgender youth.

Click “Learn more” below to find out about the Connect Center.