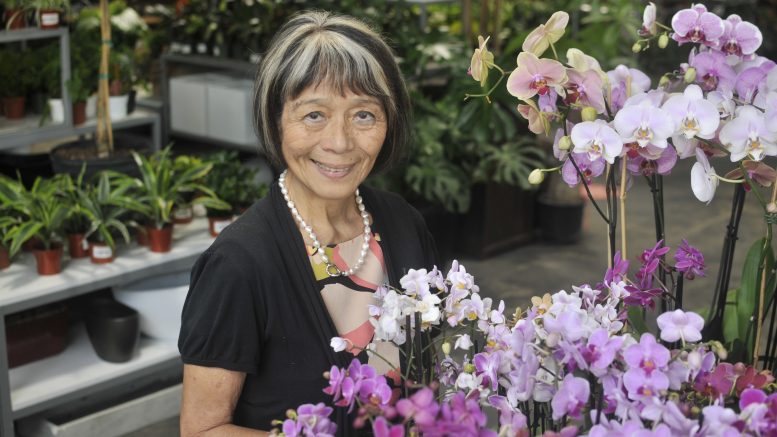 Kifumi Keppler, owner of Exotic Plants, will host an evening of gardening, food and culture, inspired by her native country. Photo by Anne Stokes

This is a garden party like no other – with a memento that can last a lifetime.

On Saturday, April 30, Exotic Plants is teaming with Mikuni Japanese Restaurant and Sushi Bar for “Japan Night,” a celebration of Japanese gardening and food led by two of Sacramento’s most famous Japanese natives – Kifumi Keppler and Taro Arai.

Keppler is owner of Exotic Plants, Sacramento’s go-to indoor gardening store. With a half century of experience, she’ll demonstrate the art of bonsai as well as Ikebana, the art of flower arranging. Keppler also will share Japanese culture and her personal stories of Japan.

Teaming with Keppler for the evening will be Mikuni chef and owner Taro Arai, who plans to personally create some of his sushi favorites. Chef Taro is an international sushi superstar, famous for his imaginative creations.

This will be Exotic Plants’ second annual Japan Night after Keppler introduced this special event in 2021. At this edition, patrons will have a choice of hands-on workshops: Either cultivate a bonsai – a potted little tree – to keep or practice Ikebana-style flower arranging and take home the results.

“Japan Night is one of the most popular parties we have,” Keppler says. “Last year, it was very well received. People wanted to come back. It’s now something people really look forward to.”

Starting at 5 p.m., this four-hour in-person event will be held at Exotic Plants, 1525 Fulton Ave., Sacramento. Filled with tropical plants, the garden store will host the sushi and sake tasting in addition to the Japanese-inspired workshops.

“Mikuni’s Live Sushi Bar, led by Taro, will provide a dining experience with the best Japanese cuisine Sacramento has to offer,” Keppler says.

Tickets are priced at $250 per person and include choice of workshop, all supplies and materials, plus lots of food and drink at the event. Seating is limited for this intimate evening, so reserve your spot early.

A native of Japan, Keppler studied Ikebana and the Japanese aesthetics of plants and gardening before coming to the U.S. to attend California State University, Sacramento. A Fulbright scholar, she focused on television and communication.

After graduation, Keppler was hired by the news department at Channel 3. In 1973, Keppler blended her work with her own heritage in “Lasting Images of Japan,” a 10-part film series aired by KCRA that she wrote and photographed.

That same year, she opened Exotic Plants, which is celebrating its 49th anniversary. Her garden store is now a destination for plant lovers throughout Northern California.

For more on Exotic Plants: www.exoticplantsltd.com.

A local, family owned business like no other in Sacramento. For more than 45 years we have brought the largest variety of premium indoor plants to the Sacramento metropolitan area. Our inventory changes constantly, but you’ll always find large green palms, ficus and fiddle leaf figs, colorful foliage plants such as crotons and bromeliads and blooming plants, including the largest variety of vibrant orchids in our community. Our plants, containers and other decor are often imported from places such as Hawaii and even Bali. Stop by our shop to experience exotic beauty in full effect! https://www.exoticplantsltd.com/

Stop and smell the roses