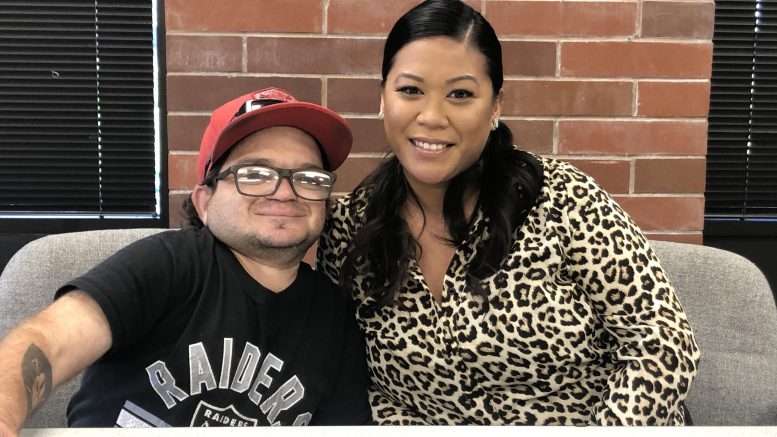 Josh Patton got the help he needed to reach his goals, thanks in part to Rachelle Franko of the Workforce Development Board of Solano County. Photo courtesy of Rachelle Franko

Josh Patton, 32, of Fairfield is a weather buff who loves to laugh and talk with people.

But recently, Patton decided he wanted more out of life and came up with two goals.

“I wanted to go back to school and get my GED,” he says.

Second, he wanted a job. He says that after confiding in a friend who works for the State Council on Developmental Disabilities, the friend suggested that he meet with counselors at the Workforce Development Board (WDB) of Solano County.

At the WDB, Patton talked with Rachelle Franko, a disabilities resource specialist.

For clients like Patton, Franko says she teaches them how to write a resume, read and understand job descriptions and apply for jobs online. The goal is to help those with disabilities to become as independent as possible.

“Josh originally came to me for job assistance,” says Franko. “But then he told me that he also wanted to go back to school. So I reached out to the Fairfield-Suisun Adult School and asked what his options were.”

But how would Patton manage such a packed schedule?

“I had to teach him how to balance his schedule because he liked his day program at Pace Solano, which was a half day,” she says.

Franko taught him how to set priorities, and she coordinated with counselors at Pace Solano to help with Patton’s job search, she says.

“We figured out what hours he could work and what he could do, and they were able to find something for him,” she says.

Patton eventually got a job collecting trash outside of Pace Solano’s facility for a couple of hours a day, which fit his schedule.

“I like working and seeing a lot of people walking by,” Patton says.

One of the biggest challenges Patton faced, however, was trying to navigate classes in the middle of a pandemic, Franko says.

“He wasn’t going on site. So he had to figure out how to maneuver that and learn how to do it virtually. He just started going to class on site last fall,” she says.

Today, Patton says he is enjoying his math lessons at school and is grateful to Franko and other WDB staffers.

“These ladies are very good friends of mine,” he says.

Adds Franko, “Everybody, even those living with disabilities, should have the same opportunities as everyone else.”

Workforce Development Board of Solano County

The Workforce Development Board of Solano County is a 501(c)(3) nonprofit organization that provides employment-related services for job seekers and businesses in Solano County.