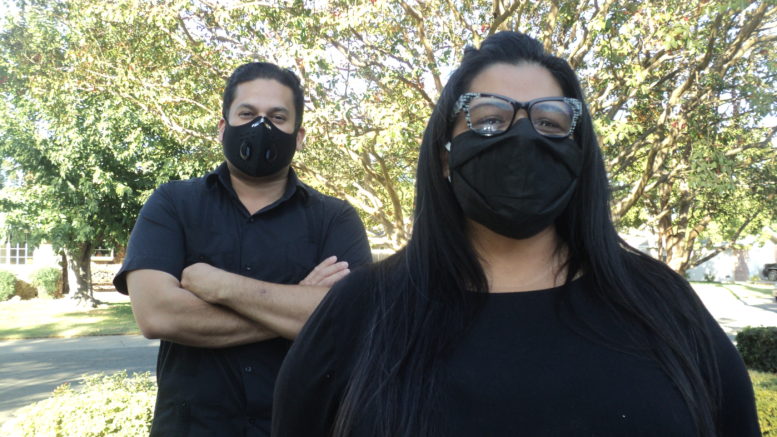 Herman Barahona of United Latinos (left) told a virtual conference that a friend had developed asthma soon after moving to South Sacramento. That friend is Mary Cervantez (right), who blames the neighborhood’s toxic air for her illness. Photo by Edgar Sanchez

As wildfires and a merciless pandemic convulsed California, a Sacramento conference explored 2020’s perils and how minorities are bearing the brunt of COVID-19.

The Oct. 15 virtual event—entitled “The World on Fire: Environmental Justice Now!”—had five local environmentalists speaking from home about climate change and other crises confronting the planet.

The impacts of COVID-19 “have not been felt by every community equally,” said keynote speaker Katie Valenzuela, a member-elect of the Sacramento City Council.

Minorities in disadvantaged neighborhoods have been disproportionately victimized by the 7-month-old virus, she said. One shocking finding: As of Oct. 19, according to the State Department of Public Health, about 48% of Californians killed by COVID-19 were Latinx, despite making up 39% of the population.

“Very early on, we started to see (COVID-19) spikes in communities of color,” Valenzuela said, explaining that from the outset, Latinx and African Americans in marginalized neighborhoods contracted the virus at higher rates than whites in affluent sectors.

The hard-hit communities were more vulnerable due to issues such as poverty, overcrowded housing and lack of health care, she stated.

“Quite possibly the most disturbing revelation came in a Harvard study,” said Valenzuela, who has worked as an environmental lobbyist. “It showed that pollution was actually carrying the virus.”

Air pollution is a big problem in South Sacramento, the next speaker, United Latinos organizer Herman Barahona, said. His nonprofit, which is supported by The California Endowment, has fought for cleaner air and water in the Sacramento Valley for three years.

Many low-income South Sacramento families suffer from chronic respiratory conditions, cancer, heart disease and other disorders associated with bad air, Barahona said. Contributing to the aggregate concentration of pollution are contaminants from three major freeway corridors, as well as commercial and industrial businesses, including a power plant.

But, Barahona noted, unlike other communities, South Sacramento has no federal air quality monitors, and United Latinos wants them installed. One of his friends developed asthma soon after moving to South Sacramento, he said.

That friend is Mary Cervantez, 46, who told this column she was healthy when she and her daughter moved from Placer County to South Sacramento in 2017.

“I started feeling ill probably six months later. I was wheezing,” said Cervantez, recently laid off from her administrative job. She was eventually diagnosed with asthma, a condition she attributes to toxic air.

Cervantez has joined United Latinos, which seeks environmental justice—meaning everyone deserves clean air and water and has the right to participate in major decision-making in his neighborhood.