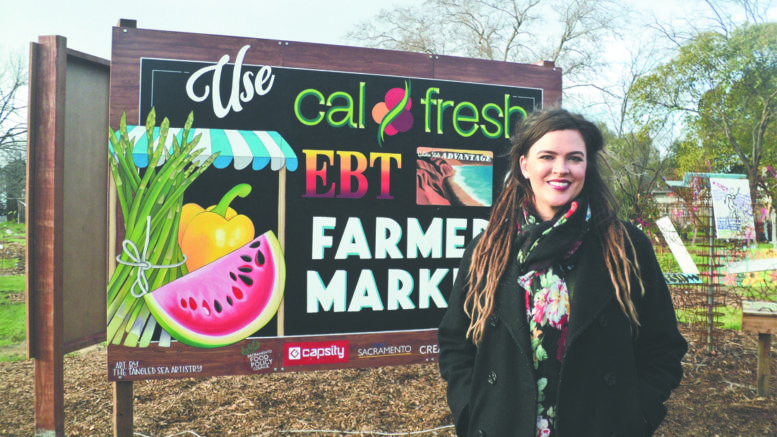 The call for artists went out last May: A striking design was needed for two Sacramento billboards announcing that CalFresh — also known as food stamps — are welcome at farmers markets.

Stacy Almy, an artist from Arden-Arcade, learned about the entry deadline just a day prior.

A special panel that received input from CalFresh recipients named Almy’s the best among four submissions, earning her a $2,500 commission.

On Jan. 17, a coalition of nonprofits, led by the Sacramento Food Policy Council (SFPC), unveiled the waterproof billboards — one in English, one in Spanish. They stand on a cement foundation at Oak Park Art Garden, a 1/3-acre plot at 14th Avenue and Martin Luther King Jr. Boulevard that is privately owned and leased by Alchemist, a coalition partner.

In November, the county had 93,508 CalFresh households, but many are unaware their benefits are accepted at farmers markets, a coalition press release said.

“It’s not often you get art folks and food folks in the same room, but we’ve done it with this project,” Adrian Rehn, of coalition member Valley Vision, told the guests. “This art piece will advance an equitable farm-to-fork economy while furthering our robust art scene.”

The project was funded in part by a $5,000 grant from the City of Sacramento’s Creative Economy Program, Rehn said.

“People literally go home, or kids go to school, and they’re hungry,” Steinberg said. “[This is] not acceptable!”

“People literally go home, or kids go to school, and they’re hungry. [This is] not acceptable!”

“Our mission statement at SFPC is to propel collective action towards an equitable and sustainable food system” said Ruiz, whose agency is supported by The California Endowment.

At Oak Park Farmers Market, CalFresh recipients can double their benefits: For every $1 of CalFresh EBT benefits, they receive $2 to shop for produce at the market.

Considering the billboards’ message, Market Manager Joany Titherington expects to see more CalFresh participants at the Oak Park Farmers Market when it reopens for the season on May 4.

Click “Learn more” below to find out about Sacramento’s Oak Park Farmers Market.