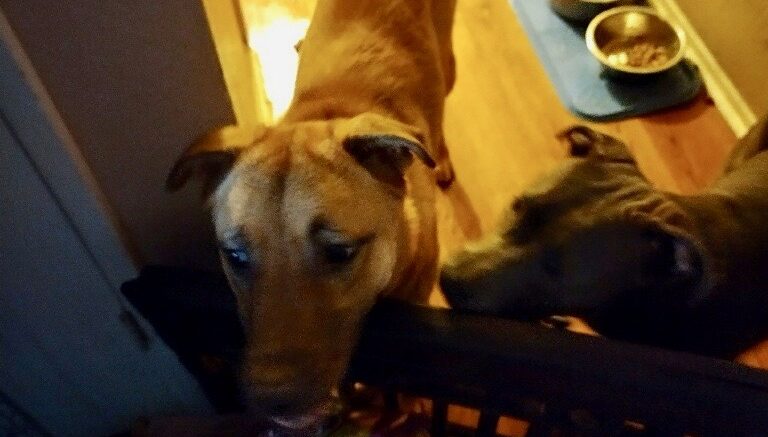 Bella, left, following three-and-a-half weeks of nursing and care in the wake of her rescue.

After getting off the phone with Front Street Animal Shelter, Dan Aderholt and Claudia Cardoza realized that it would be up to them to save a dog teetering on the edge of death. If they waited for city authorities any longer, everyone in the neighborhood who knew what was happening would feel terrible about the inevitable outcome.

The couple had been calling Front Street about Bella, a 12-month-old Belgian Malinois who for weeks – if not longer – had been confined on an unsheltered 3-foot by 5-foot outdoor patio in the wet and freezing weather, trapped in a mess of her own waste as starvation wasted her frame away. Bella’s condition was getting dire. Photographs provided to SN&R paint a wincing picture, with the shape of Bella’s larger bones bulging through her skin and almost every nook and cranny of her ribcage traceable through her storm-beaten coat.

Knowing Aderholt and Cardoza work with dog rescues, people in their South Natomas neighborhood who had seen Bella deteriorating approached them for advice. Yet, that was only after multiple attempts to get Front Street’s animal control officers to visit the apartment failed. The city’s 311 records indicate that there were calls to Front Street about Bella’s property on December 4th, 6th and two calls on December 7th.

A witness living in the neighborhood also told the group ‘Fix Front Street’ that they, too, had called the shelter about Bella’s situation even before that flurry of messages in early December.

By December 7th, knowing that Bella had been crying throughout a frigid downpour over the previous weekend, and that another storm was coming in, Aderholt and Cardoza attempted to contact Front Street one last time. It was 25 degrees that night. Given how weakened and dehydrated Bella was, they didn’t think her body could brace the relentless cold again. It was Aderholt and Cardoza who placed the second call to the shelter about Bella that day.

“They have no log about our call on the 7th,” Aderholt said in disbelief. “They actually lost it. But, when I did talk to them to see if they could get the dog out of there, they told me, ‘Oh, it will be five-to-seven days.’ I knew, by then, she was going to die.”

This wasn’t the first time Sacramantans involved in animal rescue were fuming at Front Street. In early November, a crowd of picketers gathered outside the city-run animal shelter in opposition to its recent policies and service strategies.

Specifically, the protestors claimed that Front Street is unnecessarily capping how many animals it takes in, being over-strict about what kinds of animals it accepts, and not communicating with the public about the most-realistic options for strays. Some demonstrators were especially incensed by the charge that Front Street is downplaying how many animals it kills each year. Elyse Mize, an advocate with Fix Front Street, told reporters that the shelter’s own records logged on a public data portal owned by the city prove Front Street euthanized 620 animals since last January. After the demonstration in November, Mize continued to follow the data portal’s reporting. She was shocked to learn that Front Street went on to euthanize six dogs in one day on Dec. 13th, and then another 7 dogs just on December 16th.

Aderholt and Cardoza had some awareness of these Front Street controversies, but it ceased being theoretical on December 7th when the two of them had to figure out how to approach a stranger about the dog that he was abusing.

“When we went and talked to the guy, basically, he told us that the dog was his ex-girlfriend’s,” Cardoza recalled. “They split up and she left and left the dog behind. So, the dog was paying the price. He was keeping his blinds shut to not have to see it. Basically, he wanted nothing to do with the animal … He left her outside on that patio at all times. He had a bag of dog food there in his apartment. It wasn’t that he couldn’t afford to feed her or anything – he just wasn’t.”

Aderholt and Cardoza let the man know that people in the area had reported him, and it was ultimately in his best interest to surrender Bella to them on the spot.

“When we saw Bella, she was starving and shaking,” Cardoza noted. “The guy didn’t want to get in trouble. I told him, ‘Well, if the authorities come to do a welfare check, and they see the dog in this condition, you will be in trouble.”

That was enough to convince the abuser to hand Bella over and apparently hope that the neighborhood let the issue go.

“We told him what he wanted to hear, because our main goal was to get her out of there that night,” Cardoza stressed. “Bella was totally emaciated. You could measure her waste with one hand. We couldn’t even do shots for her at first: She was too weak, and we were afraid her immune system would be compromised.”

After cleaning her ravaged coat, Aderholt and Cardoza worked on nursing Bella back with nutrients while being careful not to put her body in shock. At first, they could only give her clear unflavored Pedialyte, for her dehydration, and tiny meals every two hours. Since caring for her in the last three weeks, photos indicate Bella’s puppy body is responding and bouncing back. She’s already starting to look like a healthy dog again.

Responding to an interview request for this story, city of Sacramento public information officer Ryan Hinderman elaborated on the shelter’s position regarding the series of calls it received in December.

“On, Dec. 4, we received the call regarding Bella from an anonymous caller with no callback information,” Hinderman wrote via email. “This ticket stated that the dog looked skinny and hungry, but did not sound very dire. We only have the information provided by the caller and 311 to go off of when determining urgency. We didn’t have the photos [of Bella] we have now. For this call, we were told that the dog was located at apartment 39. On Dec. 5, the initial call was accidentally marked as ‘resolved’ after a staff member sent a feces complaint letter for the same address. Because there were multiple calls for the same address, the staff member accidentally cleared Bella’s activity from the officer’s queue instead of the feces complaint. This was an unlikely and unfortunate human error.”

Hinderman went on to explain, “However, even if this error hadn’t have been made, we wouldn’t have been able to make contact for [this] reason: We received the second call on Dec. 6 at 11:46 p.m. These call-notes described a much more urgent situation than the Dec. 4 call-notes. An officer responded on Dec. 8 at 9 a.m., which was approximately 33 hours later. Upon arrival, the officer looked at the map at the very large apartment complex, which did not list an apartment 39. All apartments were in 3-digit numbers. The officer assumed there had been a mistake or typo in the call-notes, and tried to call the calling party, but was unable to make contact to find out where the dog was located. It turns out that the apartment complex had recently renovated their laundry rooms into studio apartments, and one of them was labeled with a 39, but it hadn’t been updated on the apartment complex’s map. Unfortunately, officers have so many other emergency calls that the officer wasn’t able to spend time to search the large apartment complex in an attempt to locate the correct apartment.”

Of course, by the time Front Street’s officer arrived and then left again without finding the apartment, Aderholt and Cardoza had already been told by the shelter’s dispatch it would be five-to-seven days before anyone could respond, so they’d rescued Bella the night before. For Anaderholt, the assertion that city employees couldn’t save the dog due to confusion about the apartment is just a poor excuse after that fact.

“The address is in plain sight,” Aderholt emphasized. “It takes two minutes to find the address.”

“If they couldn’t find that apartment complex, then they have less training than a door-dasher,” she dryly observed.

Julie Virga, another member of Fix Front Street, views Bella’s plight as a kind of metaphor for the ongoing concerns that she and other advocates have been raising about Front Street since 2020. During the November protest, Virga and fellow critics focused most of their frustration on Front Street’s manager Phillip Zimmerman.

Zimmerman took the helm of the shelter in October of 2019 in the wake of running the Stockton Animal Shelter. The city of Sacramento’s media department previously highlighted Zimmerman’s work at Front Street, particularly the way he and his team were able to move 100 dogs into foster care in just two days at the start of the COVID-19 pandemic.

But Fix Front Street argues that services at the shelter have markedly changed since Zimmerman took over; and that the reasons for that are not about the facility, which has a multi-million-dollar annual budget from public funds in addition to the millions in donations it’s received the last few years, being cash-strapped or under-resourced.

“Many of the staff and volunteers at Front Street are there because of their commitment to animals, so we try to make it clear that our issues are with the management: We don’t want to paint everyone there with that brush,” Virga acknowledged. “We had our first meeting with Zimmerman in May of 2020, all of which we have recorded and documented … During it, we almost fell over, because the reason they were taking less animals wasn’t about COVID, it was Zimmerman saying, ‘We’re following this exciting new trend in shelters where the community is the shelter, and we just take in sick and injured animals.’ He has actually made no secret of this.”

Mize believes Zimmerman’s approach to dog-intake is having a downstream effect on how aggressively the city’s animal control officers are looking into calls about dogs like Bella.

“They don’t want to bring animals into the shelter, generally,” Mize pointed out. “Them not going further into an investigation into Bella is a perfect example of this philosophy of not wanting more dogs inside the shelter. And them not handling the investigation in the proper way means that this guy who abused her gets to run free.”

But Hinderman’s response on behalf of Front Street pushed back on that idea, emphasizing that – in the case of Bella falling through the cracks – part of the issue was overall resource challenges.

“In regards to wait-times for response: We have a small animal control team of 10 officers, and have 500 to 600 pending calls throughout the city at any given time,” Hinderman wrote. “Emergency situations (dogs hit by cars, loose aggressive animals, etc.) pop up constantly and disrupt the ability to get to calls as quickly as we wish we could. A dog being malnourished is extremely concerning, but most of the time is not as urgent of an emergency as many of the other calls that our officers receive.”

In Virga’s view, the public should weigh that explanation with just how horrifically heartbreaking Bella looked at the moment two citizens decided to step in.

“The bottom line,” she said, “is that no one from Front Street showed up to save this dog’s life.”