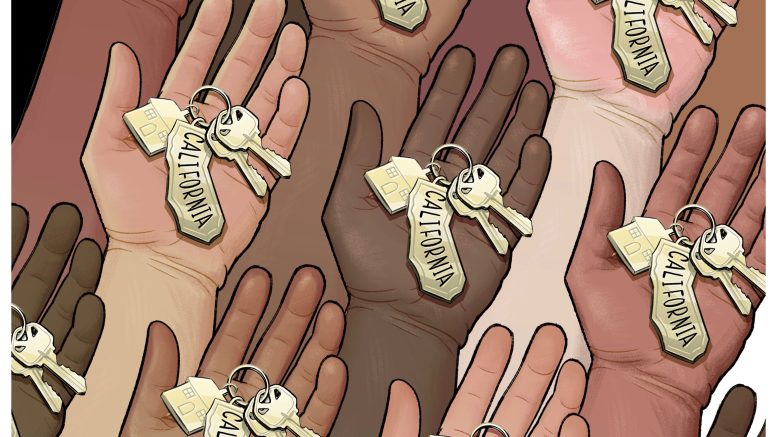 The percentage of the state’s homebuyers who can afford to buy a median-priced, single-family home slid from 24% in first quarter 2022 to 16% in the second. Homelessness in Sacramento spiked 67%t between 2019 and 2022, a June count found. In an April poll Californians ranked housing affordability and homelessness No. 1 and No. 2 as the state’s most urgent issues.

Still, state legislative experts didn’t expect much of 2022 for housing after a break-through 2021. Last year, the legislature passed major laws — especially Senate Bills 9, 10 and 478 — that mostly eliminated single-family zoning and limited rules that had stymied housing production. “Everyone thought this [2022] would be a quiet year,” says Muhammad Alameldin, a policy associate at the Terner Center for Housing Innovation at UC Berkeley.

Instead, the legislature passed three marquee housing bills — two opening up commercial zones for residential housing development and one eliminating parking requirements for new developments near transit — that had died the previous year. In the end it was, says Alameldin, an “amazing housing legislative year.”

The state’s housing disaster may have continued unabated in 2022, but legislators responded with another raft of laws to get more built. Here’s what housing experts say were the most important bills passed this year and what’s coming as a result.

In the search for land on which to erect housing, policy experts say commercial areas now zoned for strip malls and retail could catalyze economic growth. That’s especially true with more sales shifting from brick and mortar to e-commerce, a trend accelerated by the pandemic. Commercial zones are ideal because they’re often closer to jobs, amenities and transit. But 41 percent of commercial zones in the state’s largest cities forbid residential development.

In 2021, two bills to fix that stalled: AB 115 and SB 6 — in part because of opposition from construction labor unions over a lack of requirements that developers pay prevailing wages and hire mostly unionized workers. This year’s versions, AB 2011 and SB 6, also looked set to die in late August. The two bills split labor groups, with carpenters’ unions supporting AB 2011 because it would provide workers affordable housing and the State Building and Construction Trades Council of California supporting SB 6 because of its stricter labor requirements.

Rather than pick one or the other, legislators passed both.

AB 2011, introduced by Assemblymember Buffy Wicks, creates a streamlined approval process for developers but contains strict affordability requirements. Specifically, it allows two kinds of multifamily unit development: projects in which every unit is affordable and projects in which people of mixed-incomes are eligible. The affordable projects will be subject to 45- to 55-year deed restrictions that guarantee that they can’t be converted to market rate properties during those periods. And the mixed-income units require that 13% to 15% of their units be set aside for lower-income, very low-income and extremely low-income households.

In return, these projects will be approved “by right” — with approval decisions mostly taken out of the hands of local governments — a provision that cuts the time required to build by about 30%, says Alameldin. They’ll also be exempt from the California Environmental Quality Act, which housing proponents say has sometimes been abused to stop worthy projects.

Parking is a huge issue in getting more housing built. Requiring developers to provide a minimum amount of off-street parking with each new affordable unit significantly drives up their cost — by $36,000 per apartment unit on average, according to one Terner Center analysis. AB 2097, a version of which failed in 2021, tries to fix that by prohibiting local governments from imposing minimum parking requirements on specified residential, commercial and other developments located within a half-mile of public transit.

Except in specific circumstances, cities and counties can still impose parking requirements on developments in these zones by showing specific need, such as that not imposing parking minimums would negatively affect their ability to meet any special housing needs of elderly residents or people with disabilities. The law has no affordable housing requirement.

“We think it was a tough bill to pass, but it was a breakthrough for parking reform,” says Michael Lane, state policy director at the San Francisco Bay Area Planning and Urban Research Association, or SPUR.

The state’s density bonus law was enacted in 1979 to encourage developers to produce affordable housing at below-market rates. In return for including a certain percentage of affordable units for low-income households and other special populations like veterans with disabilities, developers could build additional units above the jurisdiction’s allowable zoned density.

To promote affordable infill housing, in 2019 the legislature passed AB 1763, which allowed for an enhanced density bonus–unlimited density and a height increase. It applied to affordable housing projects located within a half-mile of transit and in which 80% of units were set aside for lower-income households.

But many urbanized parts of the state didn’t qualify because they didn’t have the necessary level of public transit.

To fix that, among other provisions AB 2334 extends AB 1763’s density bonus to new housing developments in 17 specified urban counties, including Sacramento County, if the planned project is located in an urban area where residents drive less than average — a metric called “vehicle miles traveled.” It’s a move toward “smart growth,” says Lane. “It allows us to get that additional density, help with project feasibility, and provide more housing in the right places.”

Since 2016 accessory dwelling units (second units added to existing properties) have been permitted by right in California. Local governments must approve permit applications for ADUs within 60 days in areas zoned residential or mixed-use, as long as they meet certain exterior access, size and setback requirements. The laws passed in 2016 supercharged their construction: ADU permits grew from 1,300 in 2016 to almost 15,000 in 2019.

Still their share of the overall housing stock remains tiny. So SB 897 (which takes effect Jan. 1) makes numerous changes to make their construction easier. Among other things, it raises minimum heights that local governments can impose on ADUs, under certain circumstances, to make two-story construction feasible. It clarifies that standards imposed on ADUs must be objective and that agencies must approve or deny ADU applications within 60 days. And it limits the situations in which local agencies can deny permits for already-built but unpermitted ADUs constructed before Jan. 1, 2018, subject to certain conditions.

This law, as Alameldin puts it, “saves something like $500,000 to $2.2 million  by just changing one little thing in state law to allow affordable housing developers to pool  reserves.” Under current law, the state’s Department of Housing and Community Development, or HCD, runs a number of programs to make housing more affordable. Those include, for example, the Multifamily Housing Program, which gives loans to local governments and developers for new construction, rehab and preservation of rental homes for lower-income households.

MHP and several other programs require developments to hold “transition reserves” to mitigate risk in case a government affordable-housing operating subsidy or voucher program expires. The reserves are meant to let the project continue rental assistance to tenants for a year while the project transitions to higher rents. But those reserves have almost never been needed.

The new law eliminates the requirement for specified individual developments to hold transition reserves — instead it authorizes the HCD to create a pooled transition reserve. That, according to bill author State Sen. Josh Becker, will free up the money to build more affordable housing and broaden its availability to people at the lowest income levels.

The households in California that are most at risk of homelessness, or already are homeless, are extremely low-income (ELI) — those whose incomes are at 30% or less of the area median. In the past decade, developers have built about 20,000 housing units for this group, a fraction of the more than 300,000 units needed.

Current law requires that each city and county’s legislative body adopt a land use plan that details the need for new housing in the jurisdiction and its strategy for addressing the need. Each year, the local government’s planning agency must submit an annual progress report to the state that documents its progress toward meeting the plan’s housing goals. That report must cover progress in four income categories: very low income, low income, moderate income and above moderate income.

California’s 1,000 or so local education agencies together own more than 150,000 acres of land. About half of that land is potentially developable. At 30 residential units per acre, those properties could hold 2.3 million units of housing — more than enough to house the state’s 300,000 teachers and 350,000 other staff, an analysis of the law noted. But under existing law, housing isn’t a permissible use of that land.

AB 2295 changes that, authorizing housing as an allowable use on any property owned by education agencies. Among other requirements, qualifying sites must be in infill locations; the majority of units have to be affordable for moderate-income households, with at least 30%  affordable for lower-income households; and priority must go to employees of education agencies, whether they work for the local agency or one directly adjacent. The bill doesn’t take effect till Jan. 1, 2024.

Coupled with previous laws and others passed this year, will these make a dent? “I’ve never seen so many bills over the past few years introduced on the housing topic,” says Lane. “I think you’re going to see tens of thousands of units built that but for this legislation would have not gone forward.” But he also has worries: “There’s still significant neighborhood opposition to new development, no matter what, and the abuse of CEQA continues.”

This year’s package won’t get the state anywhere near to fixing its housing and homelessness crisis, says Christopher Martin, policy director at Sacramento-based Housing California. “AB 2011 is big in a lot of ways, but land use alone is not going to get us out of this crisis,” he says. Doing so would take about $17.9 billion annually, according to the group’s analysis — a bit more than the $13 billion that the state spends on its prisons, not counting local jail spending.

“We’re not getting anywhere near that,” Martin says. “We’re just doing drops in the bucket here.”
This story is part of the Solving Sacramento journalism collaborative. In 2022, we are focusing on finding solutions to the lack of affordable housing in the Sacramento region. Solving Sacramento is a project of the Local Media Foundation with support from the Solutions Journalism Network. Our partners include California Groundbreakers, Capital Public Radio, Outword, Russian America Media, Sacramento Business Journal, Sacramento News & Review, Sacramento Observer and Univision 19.

Be the first to comment on "Stuck in a housing crunch, Sacramentans wait for what’s coming with relevant laws in 2023"