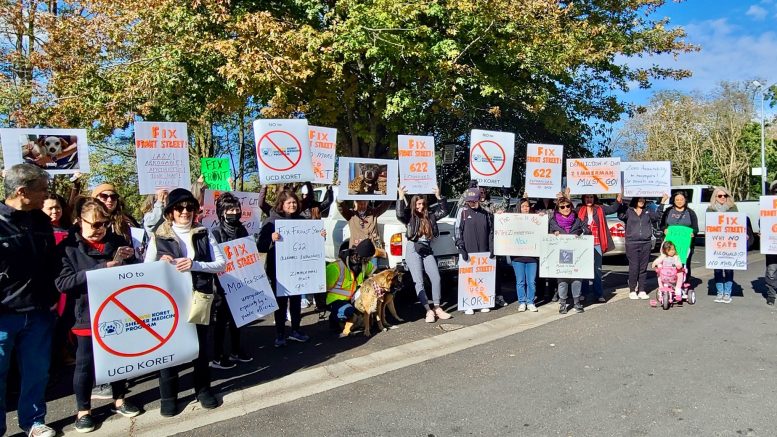 On November 6, a group of protestors descended on Sacramento’s Front Street Animal Shelter to condemn what they view as deteriorating animal care and services at the city-run facility.

Critics argue that these problems have become especially pronounced since new management took over about three years ago. Prior to the demonstration, frustration had been building with dog and cat-lovers since the onset of the pandemic. Critics say that’s when Front Street started down a path of limiting how many animals it would take – and what kinds of animals it would accept – sparking confusion in the community and creating a lack of humane options for strays that are recovered. When COVID restrictions were still in place, concerned citizens who closely follow Front Street also spoke with SN&R to decry the shelter for allegedly downplaying to the public how many animals it kills each year. During Sunday’s demonstration, shelter critic Elyse Mize told reporters that Front Street has euthanized 620 animals just since January.

Many of the demonstrators aimed their ire directly at Front Street Animal Care Services Manager Phillip Zimmerman, some carrying signs that read, “Dereliction of Duty: Zimmerman must go.” Other signs had similar messages, including, “Fix Front Street: lazy, arrogant, apathetic.” Zimmerman, who took the job in October of 2019, previous ran the Stockton Animal Shelter. In a COVID-era interview with the city of Sacramento’s media department, Zimmerman said that when the pandemic first caused the shelter to close, he and his team managed to move 100 dogs into foster care in just two days. Zimmerman’s full Inside Sacramento interview explaining his approach to the pandemic can be read here.

Responding to the protest, Sacramento City Councilwoman Angelique Ashby has called for a full audit of Front Street’s service apparatus.