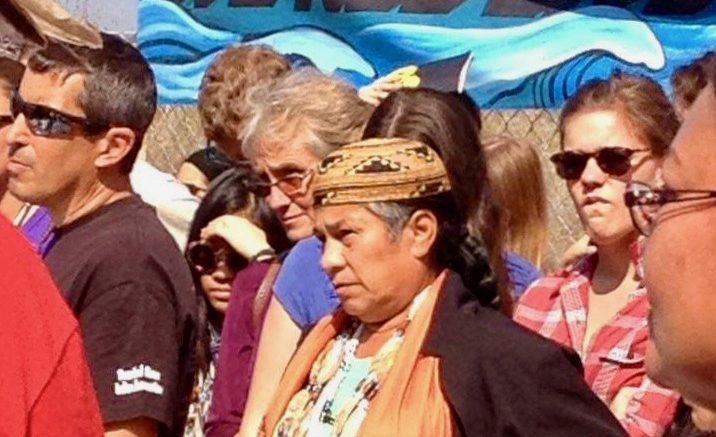 Chief Caleen Sisk of the Winnemen Wintu Tribe at a water demonstration before a prayer and song. Courtesy photo.

As salmon and Delta fish populations continue to plummet, a coalition of California Indian tribes and environmental justice groups filed a Title VI civil rights complaint against the State Water Board on Dec. 16, as well as a petition for rulemaking with the US Environmental Protection Agency.

The complaint and petition seek relief for regional tribal nations and disadvantaged Delta communities. This coalition includes the Shingle Springs Band of Miwok Indians, Winnemem Wintu Tribe, Little Manila Rising, Restore the Delta and Save California Salmon. The alliance is being represented in court by the Stanford Environmental Law Clinic.

In May of this year, these same tribes and groups petitioned the State Water Resources Control Board to update its water quality standards for the San Francisco Bay/Sacramento-San Joaquin Delta Estuary, hoping to improve instream flows in order to save fish species and address harmful algal blooms, or HABs, plaguing their communities.

The State Board refused to act on those requests.

The new legal actions taken by the coalition urge the EPA to:

Title VI of the Civil Rights Act of 1964 states that “[n]o person in the United States shall, on the ground of race, color, or national origin, be excluded from participation in, be denied the benefits of, or be subjected to discrimination under any program or activity receiving Federal financial assistance.”

This prohibition includes both affirmative acts and failures to take action or adopt policy since “inaction can exert a disproportionate adverse effect.”

“Specific prohibitions set forth in the EPA’s implementing regulations include, among others, denying a person any service, aid, or other benefit of a program or activity; restricting a person in any way from enjoyment of a privilege enjoyed by others; subjecting a person to separate treatment in any way; and denying a person or any group the opportunity to participate as a member of any integral planning or advisory body,” according to the complaint.

“But the Board has not done so for the Bay-Delta in over a decade, and it has not made updates since the nineties,” Quintana noted.

“The Board is failing to uphold both the Clean Water Act and federal civil rights law,” his fellow environmental student-attorney, Mark Raftrey, pointed out. “It is allowing the Bay-Delta to descend into an ecological crisis that harms Native tribes and disadvantaged communities the most. The EPA has the authority to correct these violations, and we call on it to do so here.”

Parties to the complaint and petition stressed the urgent need for the action at a time when they say the Newsom administration is failing to protect the Delta and the tribes that have depended on it, and the Sacramento River, for their fish, religion and cultural resources since time immemorial.

For example, the Shingle Springs Band of Miwok Indians cannot perform cultural, religious and subsistence practices in the Delta’s HABs-contaminated waters, nor can it access riparian resources essential to tribal identity, according to the complaint.

“Our ancestral homelands span Sacramento, El Dorado, Amador, Sutter, Yolo, Placer, and Yuba counties,” said Malissa Tayaba, Vice Chair of the Shingle Springs Band of Miwok Indians. “Since the beginning of time, we have taken care of the land, the rivers, the streams, the plants, animals, and our traditional resources.”

“The Sacramento Bay-Delta is the heart of my tribal community and holds vital resources that have sustained the many indigenous communities that are touched by its influence,” Tayaba went on. “Poor water quality now affects the plant and animal resources of the Delta region, as well as the Tribe’s cultural practices, and ability to carry on our cultural traditions.”

The collapse of the Delta’s fisheries and ecosystem also impairs the Winnemem Wintu’s ability to exercise its religion and way of life that depends on the once abundant numbers of winter-run Chinook salmon that returned every year to spawn in the headwaters of the McCloud River, a major tributary of the Sacramento River.

“It’s pretty bad when California Indians have to file a complaint with the Federal Government so that the state doesn’t violate our civil rights,” commented Gary Mulcahy, Government Liaison, Winnemem Wintu Tribe.

Likewise, Morning Star Gali, from the Ajumawi band of the Pit River Tribe in Northeastern California, said that the State Water Board, tasked with protecting California’s water, “has neglected its responsibilities to Tribes, communities of color, and environmental justice communities for too long.”

“Moving forward with protecting California’s clean water and designating Tribal Beneficial Uses would greatly help our salmon relatives who are vital to the culture, traditions, and health of my Tribe, along with the millions of Californians in cities that rely on the Delta watershed for their drinking water,” Gali stated.

The complaint was filed at a time when the Delta appears to be in its worst ecological crisis ever, due to decades of massive water exports by the state and federal water projects to agribusiness and Southern California water agencies, as well as the management of salmon-blocking dams and reservoirs.

A Nov. 28 memo from James White, environmental scientist for the Bay Delta Region of the California Department of Fish and Wildlife, reveals that zero Delta Smelt have been found in the department’s fall midwater trawl survey. If no smelt are reported in the survey this month, this would be the fifth year in a row that zero smelt have been found.

The slender 2-to-3-inch fish, once the most abundant fish in the entire estuary, is found only in the California Delta. It is considered an indicator species that shows the relative health of the imperiled estuary.

The decline of the Delta’s pelagic (open water) species, including three once-abundant fish species pursued by anglers, has been catastrophic since the State Water Project went into operation in 1967. Between 1967 and 2020, the state’s Fall Midwater Trawl abundance indices for striped bass, Delta smelt, longfin smelt, American shad, splittail and threadfin shad have declined by 99.7, 100, 99.96, 67.9, 100, and 95 percent, respectively, according to Bill Jennings, Executive Director of the California Sportfishing Protection Alliance.

Meanwhile, populations of winter, fall, late fall and spring-run Chinook salmon continue to plummet. A record-low number of endangered winter-run Chinook salmon fry migrated downriver from Redding to Red Bluff on the Sacramento River this year, according to preliminary data collected by the U.S. Fish and Wildlife Service at Red Bluff Diversion Dam.

“For fishermen, the fish that once thrived in the Delta become fewer and fewer in number every year,” said Artie Valencia, a community organizer for Restore the Delta. “I see Stockton residents, mostly immigrants and people of color, fishing in Stockton waterways often for sustenance.”

“Recreational users and fishermen who depend on the fish here are particularly affected by harmful algal blooms,” Valencia continued. “A friend who got rashes from water skiing in the Delta this past summer will never go into the waterways again after learning about the Delta’s harmful algal blooms.”

The groups point out that communities of color in South Stockton, where Little Manila Rising is based, cannot use or enjoy the San Joaquin River and adjacent sloughs because of HABs and chronically low flows. The health risks of HABs-related air pollution add to the environmental burdens already borne by these communities.

“As long as the state upholds historic water rights, that we all know to be racist and unfair, we will continue to have first-and second-class California communities,” said Dillon Delvo, Executive Director, Little Manila.

The new legal complaint was issued on the same day that public comment closed for Governor Gavin Newsom’s proposed Delta Tunnel. This massive tunnel under the Delta will only hasten the extinction of Delta smelt, longfin smelt, Central Valley steelhead, Sacramento River winter-run and spring-run Chinook salmon, green sturgeon and other fish species, according to tribal leaders, independent scientists, Delta residents and other tunnel opponents.

“The people and ecosystems of California do not need the tunnel,” said Daniel Armstrong, North Delta resident and angler, during a public meeting hosted by the Delta Counties Coalition and Delta Legislative Caucus in Hood on on Dec. 6. “The Delta Tunnel is a green washed infrastructure project that will be the nail in the coffin for threatened anadromous fish species, wildlife and delta communities.”

Be the first to comment on "Regional tribes, groups file civil rights complaint against State Water Board"