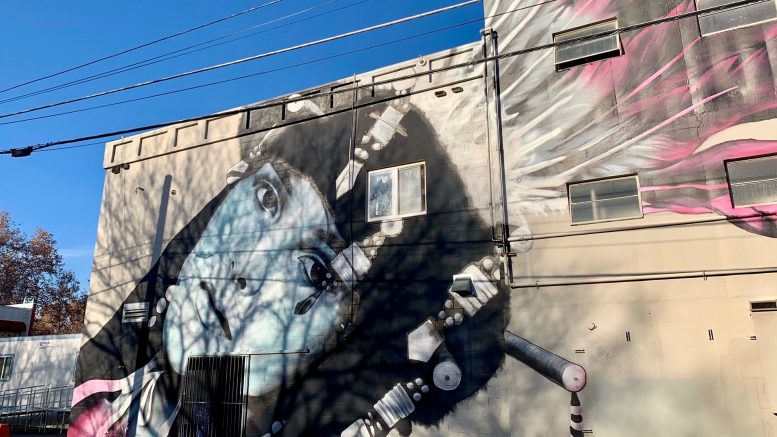 A mural in Midtown Sacramento, where studio apartments have become a necessity. Photo by Scott Thomas Anderson

By Zach Lallian and Isaac Streeter

More people in the Sacramento region are opting for studio apartments. Real estate developers have noticed this element of the housing crisis and respond by constructing a larger number of smaller, more cost-effective units in that mold.

In the last decade, the number of occupied studio apartments has more than doubled from 10,200 to about 21,900, with roughly 2.6% of housing units in the Sacramento area not having a bedroom. Many of these studio apartments feature a kitchen added to the floor plan and a bathroom that’s divided but not in a different room. By comparison, about 1.5% of housing units didn’t have a bedroom in 2011. The increased building of these units started roughly four years before Sacramento elected officials publicly acknowledged that the city was in the throes of an acute housing crisis, though the construction trend got underway when the prices leading to that reality were already starting to be felt.

These studio apartments have become most-prevalent in extremely expensive, population- dense and desirable locations of the Sacramento area, including downtown and midtown Sacramento.

“We need housing units of all types and sizes to address our state’s housing shortage and help make housing more affordable,” observed Joshua Howard, California Apartment Association’s executive vice president of local affairs. “Studio apartments provide an efficient and often affordable way for renters to find a place to live close to where they work.”

The simplest reason why studio apartments have gained popularity is the price to rent them. In Sacramento, the price difference between a studio apartment and a one-bedroom apartment is often hundreds of dollars, depending on the location of the complex. On top of this, about 42% of individuals in the Sacramento metropolitan area earn between $25,000 and $65,000. Fair market rents for a one-bedroom apartment range from roughly $1,000 to $2,000, depending on location. A Sacramento resident earning $45,000-a-year and paying $1,500 a month in rent would put about 40% of their income toward rent alone. It’s no wonder so many are looking to sacrifice square footage for cost efficiency.

For those with limited incomes, such as Sacramento State University student Alexandra Gonzalez, the savings from studio apartments are vital. Gonzalez shares a studio about a mile from campus with her fiance. The two combine to pay $1,750-a-month in rent on a space that takes up 487-square-feet.

“[The rent] is a little higher than we would’ve liked, but it’s what was available,” said Gonzalez, adding that proximity to her school’s campus – as well as lower cost – are the reasons why they went with the option. Being able to bike to school was also a big draw for the couple.

Gonzalez admitted the cramped space is still not ideal.

“You definitely have got to like the other person,” said Gonzalez., “There’s no personal space, everything that is mine is also his.”

As a general rule, the less square footage in the apartment, the lower the rent.

“The price is affordable for the location, and saving extra by renting a smaller space allows me to squirrel more away each month,” said Corrie T., a Sacramento resident who lives alone in a studio apartment in Midtown and requested that their last name be withheld.

Even when renters pay less for square footage, they still get access to amenities and common spaces such as pools, gyms and more. This is a trait that a number of apartment complexes advertise.

“My building provides security, and you can’t beat the view from the rooftop terrace,” Corrie mentioned. “Also having a mailroom/locker means I’m not worried when a package arrives.”

Some struggling with rent are drawn to the city’s downtown studio apartments because they want close access to hot spots of life and culture. Office buildings, shops, restaurants and a growing nightlife are all within walking distance.

“I walk to work instead of commuting,” Corrie noted. “It’s healthier, greener, and saves me the expense of having a vehicle.”

TOPICS:increase in studio apartments in Sacramento

Be the first to comment on "As rent prices get brutal, Sacramento’s studio apartments have become a go-to for trying to make it"