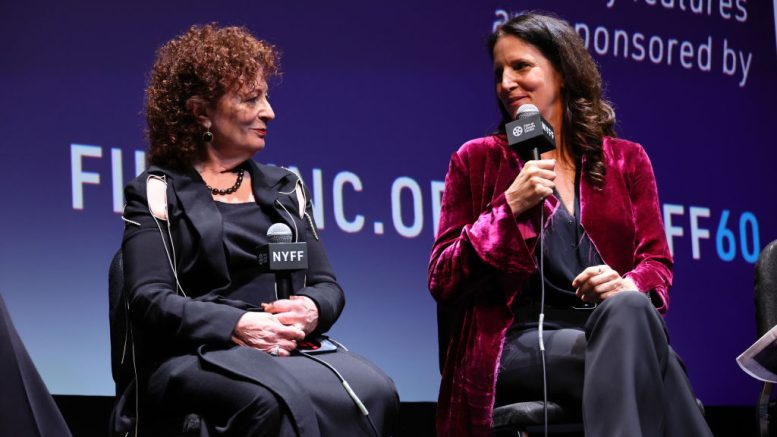 Nan Goldin and Laura Poitras attend the 60th New York Film Festival - "All the Beauty And The Bloodshed." (Photo by Theo Wargo/Getty Images for FLC)

Laura Poitras’ documentary about Nan Goldin is more than just a snapshot of the photographer’s life.

When Nan Goldin was 11 years old, her older sister Barbara threw herself onto some railroad tracks and was killed by an oncoming train. Her parents and her sister’s psychiatrist were worried that the incident might trigger a similar fate for Nan. But instead Goldin picked up a camera and found salvation through the viewfinder. It also quickly became apparent that she captured moments in life masterfully. She found grandeur in grunge and splendor in simplicity as she chronicled the gay and hard-drug subcultures of lower Manhattan in the ’70s and ’80s. When AIDS began to ravage both groups, her work became even more vital, serving as visual evidence for a mainstream society trying to turn a blind eye to a monster in our midst.

But Goldin is so much more than just a photographer. She is a sorrow-filled sister, a chronic trailblazer, a recovering addict and a persistent activist. All these versions of Goldin are captured by Laura Poitras in the acclaimed filmmaker’s new bio-doc “All the Beauty and the Bloodshed” (now in theaters). Throughout her career, Poitras has been on the front lines, documenting rebellious individuals battling against sinister, powerful foes. Most notably, in her trilogy of docs — My Country, My Country; The Oath; and the Oscar-winning Citizenfour, her camera exposed the dubious aspects of the U.S. government’s War on Terror. But in Goldin, Poitras finds perhaps her feistiest protagonist yet, one who did not hesitate to take on one of the most powerful families in the world.

The Sackler family purchased what would become the pharmaceutical giant Purdue Pharma in 1952 and launched the latter in 1991. When Purdue  rolled out the opioid OxyContin in 1996, the company aggressively marketed the drug while downplaying the risk of addiction. In doing so, Goldin believes, Purdue contributed to an opioid epidemic that has led to the deaths of over half a million people in the last 25 years. Goldin herself became hooked on OxyContin in 2014. When her doctors cut her off, she turned to street drugs and almost died of an overdose of fentanyl before kicking her habit in 2017.

Ironically, at that point, there had already been a link between the artist and the Sacklers for years. Many of the museums, galleries or universities that had plastered the Sackler name on their walls to express their gratitude for the family’s large donations also displayed Goldin’s work. Once Goldin learned of this connection, she promptly pulled her work from those institutions. But she was just getting started. Goldin founded P.A.I.N (Prescription Addiction Intervention Now), a group that advocated removing the Sackler name from the art world entirely. And when institutions initially refused, the organization protested by littering those places with pill containers, lying down in the galleries or main entryways and chanting “Sacklers lie, people die!”

The film’s trailer spends an inordinate amount of time on these acts of civil disobedience, but in reality, and in the film, this is only a salvo in the series of battles Goldin has waged in her attempt to vanquish an array of demons that have hounded her. Poitras’ film covers it all, digging into both Goldin’s childhood and career, and in the process ultimately reveals that trauma has plagued the artist her whole life and as a result has helped shape her both as an artist and activist. But once that powerful revelation is absorbed — and this isn’t to diminish the potent impact of that moment or the message — Poitras doubles down.

The filmmaker uses a slideshow of Goldin’s work as a throughline in the film, and at first, seeing her photos again is a reminder of their resonance, captivatingly capturing people under duress or seeking an escape from their internal unrest. But as the documentary starts to drag, the visual device starts to feel like those proverbial endless slideshows people’s relatives forced them to watch. And because the subject matter here is so weighty, this turns the film from an enlightening portrait to a grueling experience, with ending after ending. In the last half hour or so, Poitras’ denouement seems interminable. That said, the film is a potent and revealing portrait that helps underscore that the director is still one of the most talented, and certainly one of the most important, documentarians working today.

As for Goldin, in the end, her protests against the first family of pharma eventually paid off and most of the museums targeted by P.A.I.N. removed the Sackler name. And Goldin, with all her trauma-fueled tenacity and passion, can take some comfort in that accomplishment, as well as the fact that Purdue filed for bankruptcy in 2021 (the legal wrangling ended earlier this year). Once they became the focus of the artist’s relentless wrath, the Sacklers should have seen the writing on the wall.