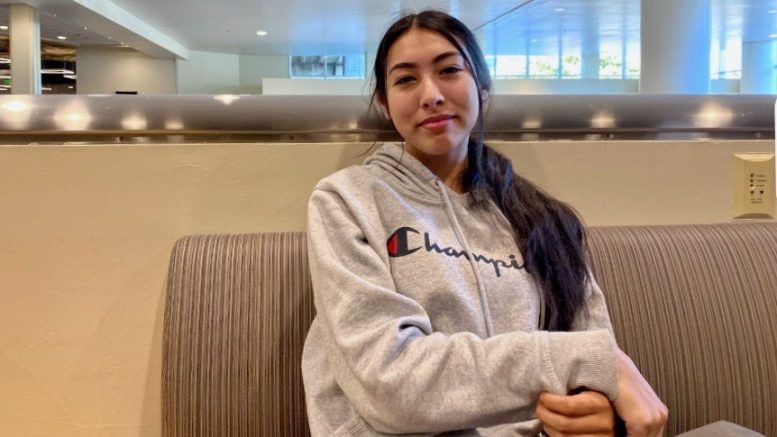 Kasandra Venegas, third-year accounting major at Sac State, sits in the University Union on Wednesday, Nov. 2, 2022. “I live in a two-story so I would notice that [the internet is] slower upstairs than downstairs,” Vanagas said.

The county may be a national leader in connection, but some inequities still persist

By Julie Blunt and Kamelia Varasteh

Broadband access in the Sacramento region has increased rapidly during the last few years, making the area a leader in internet connectivity, according to new data from the U.S. Census Bureau. About 93.5% of local households used broadband in 2021, up from 82.3% in 2015. That puts Sacramento 3% above the national average.

Access to broadband has been increasing for some time now, largely because of the increase in smartphone usage, according to the Pew Research Center. The organization’s study showed that in 2019, 37% of American adults said that they mostly use their smartphones to go online, which the study said has doubled the percentage since 2013.

Sarah Walsh is the associate director of communications for California Forward, a non-profit which states its mission is helping California residents by making the government and economy work for everyone. One of the projects that the organization is working on state-wide is broadband access.

“Broadband access has been steadily ticking upward in California, but as the Public Policy Institute of California and others have pointed out, significant gaps still exist,” Walsh said.

The early days of COVID-19 made that much clear. The PPIC has noted that additional bandwidth is required for households with multiple internet users, which became a necessity during the pandemic for those who needed online instruction and video conferencing.

The pandemic transitioned many people from their in-person jobs and education to remote online work. According to a 2021 study by the PEW Research Center, 90% of surveyed adults said that the internet was essential or important for them during the surge of the coronavirus. This transition to online work and education meant that households needed stable and fast internet access to be successful in every-day tasks. Many university students were forced into full online learning, making accessibility to the internet and technological devices important to their progress in their education.

Sacramento State University was one of many higher education institutions that offered free internet access on campus to students and staff throughout the pandemic. The university provides free internet inside buildings, outdoors and on certain levels of the parking structure by the Welcome Center. Sacramento State student Liz Ortiz always had easy access to broadband internet, both at school and at home.

“For me wasn’t a problem,” Ortiz said.

But when the world shut down, the pandemic took the reins and work-from-home orders were issued. Thanks to her internet access at home, Ortiz was able to provide other friends in with a place to work from home.

“I think that it’s a pretty good thing [because] people can do their school work here at school,” Avalos observed.  “[they] don’t have to worry about like paying extra bills and stuff.”

Even with the large gains in broadband usage, especially seen during Covid-19, challenges still remain.

Managing Director of Valley Vision Trish Kelly said that broadband access in economically disadvantaged communities does not mean that the residents are signed up for the providers.

Valley Vision is a non-profit and a civic leadership organization that helps people take action on different issues. It’s well aware of the existing tech divide.

“We have neighborhoods where less than 80% or 70% of the community are signed up and using the internet,” Kelly said. “They might not have a device, they might not be able to afford it, they might not know how to use it […] or they might have concerns about it like safety.”

Retired Sacramento residents Richard Moore and Linda Sandford said that they are alright paying a lot for their internet because they have financial stability, yet realize that some in the community might not be as fortunate.

“We are in pretty good shape financially,” Sanford said. “It may not be affordable for someone who was not in our situation.”

The cost of broadband depends on the provider; however, according to the 2021 Broadband Pricing Index the typical price of broadband last year in the U.S. was $48.42 a month.

According to Walsh, The Federal Communication Commission (FCC) provides eligible households with up to a $30 discount per month for internet services.

“CA FWD partners — including members of the Broadband for All Work Group, the California Stewardship Network, Regional Broadband Consortia, and CETF — have been actively working to help eligible California residents sign up for these and other pathways to affordable service,” Walsh said.

According to BroadbandNow, 95% of California’s internet coverage is relatively “low price.” This means that the majority of California residents who have access to broadband can get it at a lower price than other states. An interactive BroadbandNow map shows that Sacramento areas where a high proportion of residents live in poverty are generally served by fewer internet service providers.

Kelly cautioned that some households that technically have “fast” internet run into challenges when multiple people are online at the same time.

Kasandra Venegas, another local college student, said her internet speed went down during the pandemic.

“I live in a two-story so I would notice that it’s slower upstairs than downstairs,” Vanagas recalled.

Ortiz also had a similar issue with internet connection speeds because of the amount of people who used the same connection at one time.

Moore and Sandford say that their internet reception is not always stable.

“We get varied reception (and) sometimes it isn’t great,” Moore said. “I’ve had to get onto zoom meetings where they can’t hear me. But mostly it works fine.”

With broadband access increasing in the area, the Sacramento metro is increasingly becoming more connected to the internet over time.

“Yes, the numbers [of access] are improving and everybody knows how important it is,” Kelly explained, “but we still do have gaps and disparities in the region.”

Be the first to comment on "Wired Sacramento: Broadband access has become better than ever in the Capital City – and more important than ever"