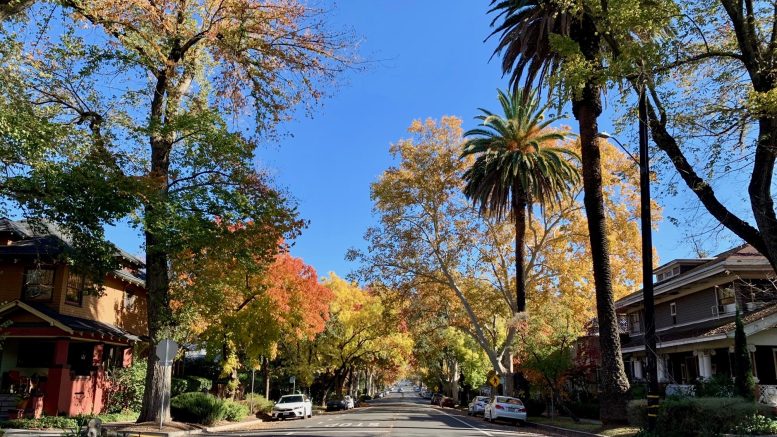 The nature of Sacramento's rental market has been in flux for a decade now. Photograph by Scott Thomas Anderson

A drive through Sacramento reveals thousands surviving in tents under freeways, on top of sidewalks and along the American River and its various creeks and sloughs. Since 2019, the county’s homeless population grew by 67%, according to the last official survey, and that jarring rise came in the aftermath of private equity groups buying up vast amounts of the area’s housing stock.

Sacramento has become tagged by tenant groups as “a land of corporate landlords,” many of which are shrouded behind LLCs, or limited liability corporations, as their holdings complicate both housing and shelter options for the community. According to housing advocates, large corporations own too many single-family homes and rental buildings in the Sacramento region, robbing homebuyers and “mom-and-pop” investors of the opportunities to build wealth — and contributing to broader housing affordability challenges that are causing people to land on the streets.

In fact, until recently, Blackstone was the largest landlord in the area and the biggest private property owner in Sacramento County, according to a 2017 master’s thesis study by Maya Abood of MIT’s Department of Urban Studies — findings that were soon supported by an independent investigation from KCRA News in 2018 and a separate analysis by the Anti-Eviction Mapping Project, a volunteer data collection and analysis project.

Last year, Assemblymember Mike Gipson set out to bring financial accountability and transparency demands to the issue of corporate landlords in California. His proposed Assembly Bill 1199, or the ‘Homes for Families’ bill, would have put an excise tax on multi-million dollar corporate landlords and used the revenue to fund rental assistance and homeownership programs. Gipson’s team had estimated that the bill could bring in $1 billion annually for those efforts.

While there was major enthusiasm from housing advocates when Gipson announced AB 1199 in February 2021, this year the fate of that legislation ended in a way tenants’ groups were dreading. It died in committee. That has real consequences for workable solutions around the housing crisis — and for keeping it from getting worse.

The Alliance of Californians for Community Empowerment, one of the state’s largest tenant groups, confirmed that it’s aware of no major bills at the moment that would channel significant funds to rental assistance programs in the wake of AB 1199’s demise. ACCE Director of Communications Anya Svanoe stressed that, given the aftershocks of the pandemic, spiking inflation and a possible recession on the horizon, that needs to change fast.

“One of our biggest concerns is the estimated 100,000 tenants who are still waiting for rental assistance from the pandemic, even though that program ended over eight months ago,” Svanoe said. “In addition to those who never received their assistance, we have thousands of people who we believe had their applications wrongfully denied. … We’re really hoping to work with potential authors on new bills for more rental assistance and tenant relief. We’ll see.”

The housing problem in Sacramento County is part of a much larger problem in the state, according to a report released in March. In this analysis, produced by Bargaining for the Common Good, the Institute for Policy Studies and the Americans for Financial Reform Education Fund, the housing fate of tens of thousands of Californian families rests in the hands of a select few wealthy corporate landlords who amassed billions in additional wealth during the pandemic.

The report, “Cashing in on Our Homes: Billionaire Landlords Profit as Millions Face Eviction,” found that 10 corporate landlords in California had wealth totaling $55 billion. It also noted that those firms have seen their collective wealth increase by $7.9 billion since mid-March 2020.

“These 10 landlords own and operate 184,000 units statewide and have secured $191 billion in cash-on-hand’ — loans, cash and other funds from investors, banks and financial firms — to purchase homes and smaller companies active in the market,” the report detailed.

Research by the authors indicates that many of these same companies profited from the 2008 financial crisis by buying up real estate at rock-bottom prices while the nation’s mortgage system was melting down.

“This report shows what our communities have seen during crisis after crisis in this country: wealthy, white billionaires and multi-millionaires profiting from our pain,” co-author Sara Myklebust wrote.

Some of the report’s proposed solutions were taken up by Gipson when he authored Assembly Bill 1199. The bill was sponsored by ACCE and several other organizations, and local endorses included the Sacramento Housing Alliance, Sacramento Tenants Union and South Sacramento Seniors for Systematic Equality.

“Wealth accumulation of this magnitude and market cornering represents a real threat to the American Dream, as families are struggling to make offers on homes,” Gipson said when he first introduced the bill. “Mom-and-pop landlords are being elbowed out of the real estate business and tenants are left with no information about who owns their homes, while billionaire landlords are positioning themselves to own entire neighborhoods. We need real government intervention to prevent this.”

While there are no studies or data that definitively prove small landlords provide inherently better property management or rent prices than larger corporate landlord groups, Abood’s MIT study found that Wall Street-connected landlords are generally under pressure from both shareholders and bond-rating agencies, which can in turn incentivize minimizing losses through “speedy evictions and aggressive fee collections.”

In addition to the taxes AB 1199 would have collected to assist those struggling with housing, it had a major component on the transparency front: The bill instructed the Secretary of State to gather information about the people behind the LLCs when they are registered and created, according to Jyotswaroop Bawa, the chief of organizing and campaigns at the California Reinvestment Coalition.

Jyotswaroop noted this information would have allowed the public and housing rights activists to see how much of California’s housing stock is owned by a few investors.

“We could then match that information with the investigations that the State Attorney General’s Office and local code enforcement are grappling with to ensure that housing is properly maintained, and tenants are not unlawfully evicted and harassed,” Jyotswaroop pointed out. “The transparency in ownership would ultimately serve as the necessary basis for good housing policy. For us to design effective solutions for our housing affordability crisis we first need to know who is setting the rents or out bidding homeowners with all cash offers.”

Additionally, AB 1199 would have also pushed back against corporate monopolies in real estate by directing some of its revenues to support right to counsel programs for tenants. The objective was to give everyday people a fair chance in the halls of justice, according to Bawa.

“And the bill designated funds to first-time homebuyer education and mortgage support programs, and foreclosure prevention education and support programs,” Bawa noted. “The basic idea was to know what is happening in our housing market and curb the profitability of mega corporations so small investors and community folks have a chance at homeownership and real-estate investment opportunities.”

But the bill died in the California Legislature this past February.

So why did a bill supported by 155 community, housing, tenant rights, homeless and social and racial justice groups fail in the Legislature, a body that touts itself by the majority of members as progressive? Bawa cites two major reasons.

“First, perhaps the biggest barrier to success was the fact that when the bill was designed and introduced, the Secretary of State position was vacant,” she said. “Alex Padilla was now in Congress. The Secretary’s office could not weigh in on a bill that rested on them doing the work.”

Second, she added, was that despite an outpouring of support from community-based organizations and supportive media coverage, the bill faced opposition from the former Assemblymember and Chair of the Tax and Revenue Committee, Autumn Burke. Without Burke’s support, the bill could not move through the committee’s policymaking process, according to Bawa.

But Burke described the situation to SN&R somewhat differently: Burke said her memory is that the bill, as it was written, did not have the votes to get out of committee. Burke also recalled, via email, that during the last fall break she offered the advocacy groups help in “working on” the bill so that it might be able to advance, but they didn’t take her up on it. Burke went on to note that she cared about housing issues when in the legislature, the proof being that she authored California’s proposed “Right to Housing” law in 2020, which was ultimately vetoed.

But regardless of what happened behind-the-scenes with the Tax and Revenue Committee — or what the potential vote tallies were for Gipson’s bill among its members — what is clear is that powerful lobbying groups had taken positions against it, many of whom had contributed to Burke’s campaign funds.

In total, Burke netted $29,300 from groups that did not support the bill.

In late January 2022, Burke announced her resignation from the Assembly and officially joined Axiom Advisors, a full-service government affairs firm that provides strategic consulting to clients in Sacramento and throughout California, as a principal consultant.

Assemblyman Gipson gutted and amended his attempt into another bill, AB 889, hoping to move the transparency part of his proposal in the Senate. This bill required landlords who hold rental property in the name of a corporation, or LLC, to report the identity of the beneficial owners of the property to the California Secretary of State.

But that bill did not pass out of the Judiciary Committee, chaired by State Senator Tom Umberg (D-34), according to Bawa.

As in the case of AB 1199, support for AB 899 came from advocates for tenants and affordable housing — and opposition came from real estate agents and landlords who contended that the bill’s requirements were “unnecessary and burdensome.”

Vexing to housing advocates is the fact that Umberg had similar campaign funding dynamics as Burke, having received at least $1.7 million from the Fiance, Insurance and Real Estate sector since he was elected to the legislature in 1990, according to CalMatters. That’s 19% of his total campaign contributions.

It is not currently known what role, if any, Blackstone, Black Rock, Invitation Homes and other corporate landlord firms played in defeating either bill. In fact, the whole point of both bills was to increase corporate owner transparency.

“I’m not sure if there is a direct connection that can be made without corporate owner transparency,” Bawa acknowledged.

Legislative death and the future

Since AB 889 and AB 1199 failed to go to a vote, Bawa said her organization is now working on obtaining support in the State Senate for similar legislation.

She points out that if the country is heading into a recession, tax bills like AB 1199 may become even harder to move. “We are focusing our efforts on transparency for the time being,” she added.

Assemblymember Gibson’s Office declined to comment on the demise of AB 889 and AB 1199 — and whether or not he would sponsor similar legislation in the future.

The Sacramento Tenants Union was one of the many supporters of AB 1199. In 2021, STU member Elliot Stevenson said to SN&R, “Blackstone and other corporate landlords, they kind of fly under the radar in Sacramento in a lot of respects. Their influence in here is especially pernicious, and it’s not scrutinized nearly as much as something like a large apartment complex in Midtown or Downtown would be. … Any legislation shining some sunlight on them is greatly needed — and long overdue.”

2 Comments on "As corporations dominate Sacramento’s rental market, opposition by Realtors and landlords caused demise of the ‘Homes for Families’ bill "