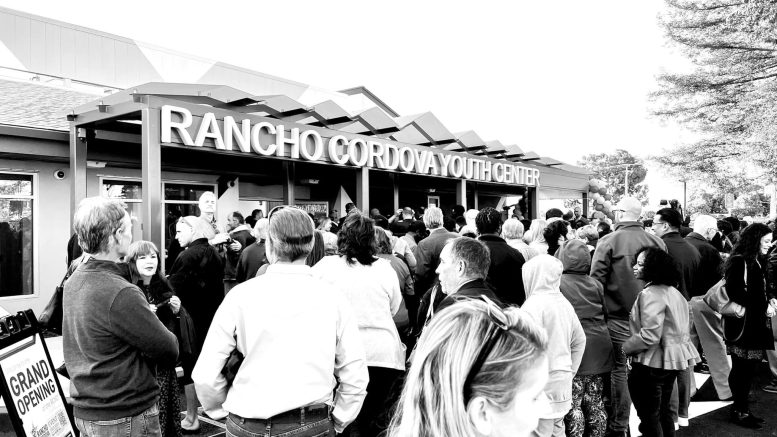 By Antonio Harvey, The Sacramento Observer

Bishop Parnell Lovelace Jr. and the congregation of Center of Praise Ministries occupied the property at 10455 Investment Circle as a place of worship in Rancho Cordova for nearly eight years before moving to a new location in midtown Sacramento.

While the building rarely was used at full capacity, Lovelace saw an opportunity to convert it into something purposeful after a few troubling incidents involving young people and law enforcement made local and national headlines.

With the assistance of Center of Praise, the city 13 miles east of Sacramento and law enforcement agencies, the facility was reborn when it opened as the Rancho Cordova Youth Center on Nov. 4.

It’s the first center in the community that will provide a safe haven for year-round youth programs, a healthy relationship with local young people, and a presence that will show local youth how much the community cares about their success.

“Our unique collaboration of a faith-based organization and municipality has shown that our underserved youth are indeed a priority,” Bishop Lovelace said. “This state-of-the art facility will be a place where dreams and goals come true for a new and emerging generation of servant-leaders.”

The city invested $8 million in capital funding to renovate the 1.75-acre property, which includes a 9,000-square-foot building. The federal government, with the support of Congressman Ami Bera (D-Elk Grove), issued a $350,000 grant for programming and equipment.

Programs at the facility will begin early in December for children ages 6 to18, enrolled in 1st through 12th grades. Programming focuses on mentorship, academic support, art and sports activities.

The city manages and oversees the facility and operations, and it contracts with two partners — Boys and Girls Clubs of Greater Sacramento and the Rancho Cordova Police Activities League — to implement services for the youth.

“It is critical that we invest in our children’s future by creating spaces where they are safe and cared for, so they have the opportunity to fulfill their potential,” Rep. Bera said.

Center of Praise Ministries in Sacramento is leasing the property to the city at no cost for 25 years, with the option to extend for another 25 years. Bishop Lovelace said the collaboration between the church, Rancho Cordova and law enforcement is a “problem-solving venture.”

“We still have ownership of the building but we are partnering with the city with our building,” Bishop Lovelace told The OBSERVER. “The main emphasis is that we’re looking at serving 20,000 youth, primarily Black and brown babies in that area, that have never had a comprehensive youth center in the history of Rancho Cordova.”

Bishop Lovelace shared what he called “specifics” that have not been reported about the youth center. The project is the result of a combination of entities unifying to solve problems in the community, but the idea actually started with Center of Praise.

In January 2020, the city held a ribbon cutting to celebrate Center of Praise’s pledge of the building and its support for the development and oversight of the youth center. The shooting death of Stephon Clark by two police officers in the backyard of his grandparents’ South Sacramento home was the underlying driver to build the center.

During the process of raising funds for the Rancho Cordova facility, a disturbance took place in the community that solidified why the youth center was a priority.

In the spring of 2020, a Rancho Cordova police officer was captured on video beating a 14-year-old male who had just illegally received a cigarillo from an adult outside of a 7-Eleven convenience store off Mather Field Road.

Thanks to local social justice activists who were alerted to the situation, the video went viral and sparked a nationwide outcry. Bishop Lovelace and members of the church who know the community were outraged.

Bishop Lovelace and Center of Praise leaders had gone to the Rancho Cordova City Council and told the mayor and councilmembers that three issues had to be addressed for the community in order to prevent such occurrences in the future.

He said they “demanded” that the officer be fired and banned from working in the city again, and that the city provide a culturally sensitive training program for police officers working with youth.

“Under the guidance of the City of Rancho Cordova, its city manager and the police chief at the time took it to task,” Bishop Lovelace said. “All three demands were met. We just felt that the city could not just say it cared about young people. There needed to be an investment and an investment to transform young lives. So why not transform a building into a safe haven that would transform the youth?”

The partnership also includes the Rancho Cordova Police Activities League (PAL), a program that will provide the center sports, educational and mentoring projects. The PAL Boxing Club, Junior Giants, and Youth Leadership Council will have a presence at the center.

The nonprofit PAL has offered a variety of free programs in Rancho Cordova since 2009, including positive role models, and supports our children’s growth. Programs were held at various area schools, Lovelace said. The new center gives PAL a single site for its services.

“This investment in our youth will have a long-lasting positive impact on our kids, neighborhoods and city as a whole. We are proud to work with our community partners to make this dream a reality,” PAL President Lt. Rich Merideth said.

The Boys and Girls Clubs of Greater Sacramento will develop the academic programming, including homework support and completion, leadership development activities, and career programs and mentoring.

It is the nonprofit’s first community-wide program in Rancho Cordova.

“Together, the city, PAL and the Boys and Girls Club will harness the power of our reputations, strength of our relationships in the community, and experience serving youth to provide a safe place where Rancho Cordova youth and teens can thrive,” said Kimberly Key, CEO of Boys and Girls Clubs of Greater Sacramento.

About 400 residents of Rancho Cordova, children and community partners attended the grand opening ceremony. They toured the new center and sports fields, participated in family friendly activities, and had dinner from food trucks. The attendees also had an opportunity to become a part of history by painting their initials on tiles that will become a permanent art installation at the center.

“Thanks to our city’s $8 million investment and our partners, this dream has come true. We look forward to seeing how our youth shine at the Rancho Cordova Youth Center,” Mayor Donald Terry said.

The dream is now a reality for an area that was incorporated as a city in 2003. The youth center is much-needed in Rancho Cordova to support youth from many racial and ethnic backgrounds, as well as socioeconomic levels.

Bishop Lovelace called the center’s opening a “momentous occasion” made possible by the actions of the leaders of Center of Praise Ministries. More importantly, he said, the moment represents a method to get “the police to work with the community” in a positive way.

“It was a phenomenal opening to see the community come together (as well as) the faith-based community, law enforcement, and nonprofit youth organizations collaborating together for the benefit of the youth,” Lovelace said. “The city took up our offer and that’s what you have there today: a building that represents an effort by the church and other municipalities. Hopefully, what we’ve done will be a model for other communities both in our region and nationally.”

To learn more about the RCYC, contact Megan Siren by email at msiren@cityofranchocordova.org or at 916.851.8892.