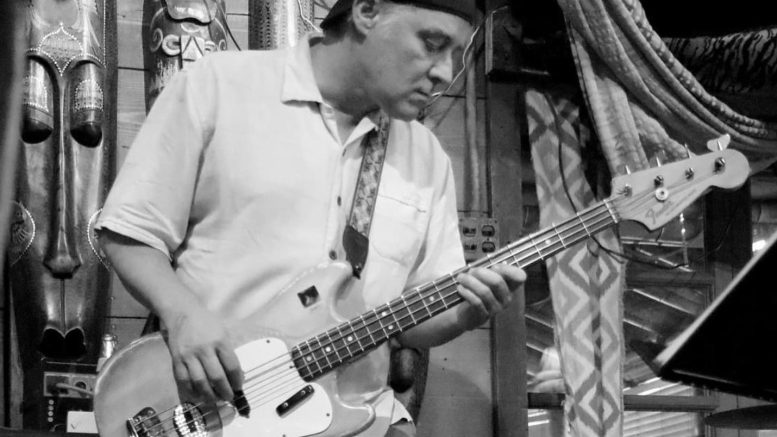 The deep rhythm behind Cake, current bassist for the Katie Knipp Band, on his upcoming Nov. 6 show at The Sofia – and on never giving up

A few minutes after pulling my Borders Books & Music nametag over my head, my manager dropped a box on the counter full of albums that were about to launch. I knew what to do next, but a coworker stepped in and began flipping through the collection of CDs. The smell of brand-new plastic and freshly sliced cardboard wafted up while she shuffled through a couple album covers, grabbing a CD emblazoned with a man blowing smoke into someone’s face.

I was left to focus on the cream-colored album with a faded blue star. I looked closer. The man pictured had what appeared to be white streaks flowing back from his temple. I lifted it up and read the back, hoping to recognize names of songs or players. Nope. Somehow, a then-18-year-old me hadn’t heard of what might be considered the most successful band to ever have roots in Sacramento: Cake. That album, “Comfort Eagle,” was due out the next day on July 24, 2001, along with The Strokes’ debut and Tricky’s “Blowback” that my coworker was holding onto.

“Comfort Eagle” was the fourth album from a band that would have dozens of hits on the radio. And part of that album’s speaker-pulsing power was bassist Gabe Nelson, who rode the wave of acclaim that Cake enjoyed after its genesis in 1991. Nelson joined three years later – temporarily, then – and after leaving the band once, rejoined for the long haul in 1996.

Having played on many of Cake’s best-known albums, Nelson ultimately exited in 2015. In the years since, he’s been teaching guitar and bass at Kline Music and making plenty of music of his own. It’s a passion that has followed him since he was a child.

Nelson was born in Sacramento, but moved with his family to Orange County until his parents’ divorce in 1972. Before hitting his teens, Nelson was back with his mother in Sacramento. Prior to the move, Nelson had always wanted to play a stringed instrument. He understood his family’s financial standings, so he humbly withheld from asking them for a guitar, which might have either upset their budget or made them feel guilty for denying him.

“I didn’t want to do that,” Nelson recalled. “When I was a kid down there in Orange County with my dad, we were pretty poor, so the idea of asking for a guitar was — I never did. I thought the answer would be ‘no.’ My parents would have felt bad to have to say ‘no.’”

But then serendipity stepped in.

“I found a guitar in her closet,” Nelson said of an early discovery in his mother’s Sacramento home when he was 12. “I started learning chords on the guitar.”

That path would take Nelson to stages across California and then around the world. He’d put the punch and low-end prowess in Cake’s hits like “Let Me Go,” “Never There” “Short Skirt/Long Jacket,” “Sick of You” and a soaring cover of “Guitar Man.”

Nelson would eventually find his own distinct musical voice away from Cake, but it was a story that would later come with a challenging saga in his personal life.

With some hesitation, Nelson talked briefly about why he left Cake. Though he was reluctant to give too many details, he knows that it’s unrealistic not to discuss such a wide span of time in his life coming to an end. Nelson admitted, though, that a big part of his inspiration to leave was fatigue from so much travel.

“A lot of times, I don’t do interviews because people just want to talk about Cake and I’m not even in the band,” Nelson acknowledged. “Travel’s just changed over the years. Take off your shoes, take off your belt and all that kind of business, and I just got tired of being stripped, searched and all that.”

Nelson added that life on the road is hard on the body and the mind. To this day he still suffers from some of the effects of such a time-zone hopping and travel-heavy lifestyle.

“The life on the road is like — you might be getting back to your hotel at midnight, but you can’t fall asleep till two,” Nelson said. “But then you gotta get up at six. I think I developed insomnia from being on the road and I still deal with that quite a bit. I got melatonin and sometimes that helps, but I find if you … try to do it every day it kind of loses its power.”

Nelson has since formed a band, Bellygunner, with his late wife Peggy Lanza. It also features Tom Monson on drums, Shawn Hale on bass, Steve Randall on lead guitar and Nelson himself on guitar and vocals. Historically, Nelson’s stayed busy by joining forces with other bands like The Mother Hips, though recently he’s enlisted in one of the most-active groups in the region, The Katie Knipp Band.

A bluesy, jazzy, highly original phenomenon, Knipp’s band has Nelson returning to his roots as a bass guitarist. This Sunday, Nov. 6, The Katie Knipp Band will headline at Sacramento’s Sofia Theatre, with Bellygunner opening the show.

That means Nelson will be pulling double-duty. Knipp told SN&R that giving her bassist that much stage was an obvious choice because collaborating with him has been an exciting honor.

“He has a special kind of creative mind,” Knipp said. “He cares a lot about the song structure and about getting things right. That’s one of the reasons I’m having him open: so that I can just really enjoy [Bellygunner].”

Though Nelson has only been a part of Knipp’s band for a short while, he recalls being instantly charmed by her encouraging and delightful nature. The first time Nelson performed live with the band, he said she proved to be an unusually caring band leader.

Knipp said that, when she approached Nelson to join her group — on the heels of former bassist Zack Proteau’s exit — the two were already Facebook friends and the conversation was quite to the point.

“When Zack had to leave the band and I saw that Gabe had been so supportive of me, I just flat out asked him, ‘Do you want to play with us?’” Knipp explained. “He’s still playing with us … talking about dates next year. I’m very honored.”

Nelson worked with Proteau in Nov. 2021 at an event organized by the Beatles Guitar Project. Covering the Beatles’ “White Album,” Nelson joined Peter Petty, Proteau and Kitty ONeal’s band Skyler’s Pool (among others) for two shows. He said that Proteau left Knipp’s band due to an irresistible job offer, creating the need for a bassist, which Nelson happily took over.

“He’s a good engineer, he’s a very good bass player and just a heck of a nice guy,” Nelson said of Proteau. “He didn’t want to leave [Katie] high and dry. ‘You’d really be doing me a great favor if you’d step in’. So, I said okay, I’ll do it. And, you know, I’m just enjoying it.”

Playing past the pain

Between his time with Cake and joining The Katie Knipp’s Band, Nelson released one album with Bellygunner. That was in December of 2013 and it was a longplay record, recorded at 45rmp. The release of that album came two years after Cakes’ most recent full-length song collection, “Showroom of Compassion,” which was the last recording Nelson collaborated with his well-known bandmates on.

Currently, Nelson has a roster of songs he’s fine-tuning for the next Bellygunner album; but, due to the death of his wife in Nov. 2019, the band’s lineup will be a bit different when they take the stage to open for Knipp this weekend.

In 2018, shortly after Nelson joined and began touring with The Mother Hips, Lanza was diagnosed with cancer. The onset of her ailment cut his time with that band markedly short.

“Those guys are a lot of fun and I really liked being in the band, but that was cut short because my wife got sick,” Nelson said of his time with the San Francisco powerhouse. “It got to the point where, I mean, my house was a mess. It’s been almost three years [since she passed] and I’m still going through her stuff and figuring out where it goes. Like, family portraits and stuff like that.”

To continue working, Nelson began splitting caregiving duties with his mother, Lanza’s sister and a friend of the family. He said that, without the help of those allies, he isn’t sure how he would have gotten through the ordeal.

“It was a rough time — it was very rough,” Nelson admitted. “She was sick for two years. And she couldn’t go up and down the stairs, so we had to move the bedroom stuff down here. She had 24/7 attendants.”

Getting himself back in the proverbial saddle, Nelson has a library of stems and tracks in development for an upcoming Bellygunner release. He said that, at this point, it’s been over four years since the band took the stage.

“I’ve been trying to pull it back together,” Nelson said. “In the meantime, everybody also went out and got into all these other bands, too, staying busy, of course. I’ve got plenty of demos worked up, and I just need to get them mixed in and finalized — maybe we do a couple of vocals”

The mixing takes up a lot of Nelson’s energy and time at home on top of his already packed show schedule. But perfecting and tweaking the demos and tracks – the constant tinkering – is a kind of time-consuming work that represents his passion.

“I really don’t do anything else; I just do music,” Nelson observed. “I have my lessons and I have to do a lot of lesson planning … Then, in the rest of the time, I’m playing in bands and doing gigs and recording. And that’s it.”

Neil Campisano, Knipp’s drummer, said that he and Nelson live in close proximity of each other and wind up carpooling to most gigs. Campisano thinks sharing music recommendations, and hearing about Nelson’s time in other bands, has been a highlight in his recent memories.

“He’s an encyclopedia of music history,” Campisano stressed, then mentioned some shenanigans Nelson pulled at a recent performance at Almost Famous in Livermoore. “I was cracking up because he had no problem dressing up as a banana when we just did our Halloween gig. Katie was like, ‘I have a banana costume and I’ll bring it.’ Gabe threw that thing on, no problem. Every time I saw him out of the corner of my eye he was dancing and having a whole lot of fun.”

2 Comments on "The boldest bass: How Sacramento’s Gabe Nelson went from a famous band to his new life prolonging the magic"