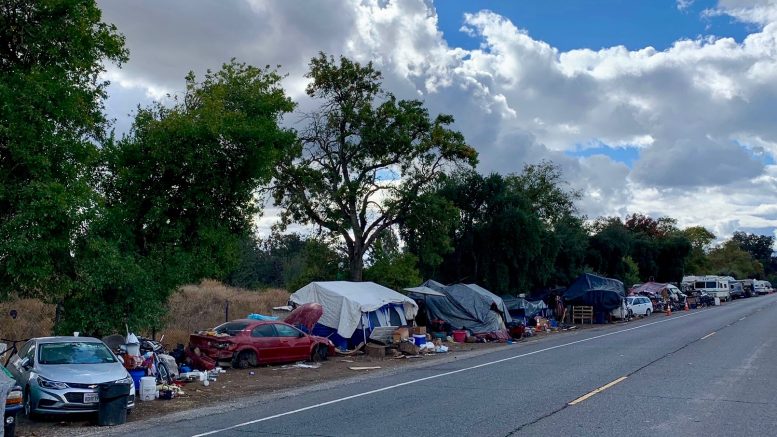 An encampment on Roseville Road in north Sacramento County stretches, on and off, for more than a mile. Photograph by Scott Thomas Anderson

As Moreno, Hume look to replace the board’s famous swing vote, advocates are trying to gauge what they really think about two of the most-pressing issues

In 1994, Don Nottoli won the race to become Sacramento County’s District 5 supervisor. Thirty years later, he still holds that position. But not for much longer. Nottoli has announced his retirement, leaving voters to choose between Jaclyn Moreno and Pat Hume as his replacement.

Moreno is president of the Cosumnes Community Services District board of directors, the governing body responsible for the operation and administration of the CCSD fire and parks and recreation departments. Hume is an Elk Grove city councilman. The two candidates offer very different viewpoints on various topics, not least of which include homelessness and affordable housing.

That matters because Nottoli has long been considered an independent tie-breaking vote on a board that has had essentially had two progressives and two conservatives flanking the District 5 representative for years. When the Sacramento City Council and the Sacramento Board of Supervisors both voted between 2014 and 2015 to eliminate inclusionary housing rules — a mandate that developers actually build affordable units as part of their projects — Nottoli was the lone elected official who wouldn’t go along with the sea change and voted on the side of housing advocates.

Hume first became an elected official in 2016. Nottoli confirmed he’s endorsing Hume, saying he appreciates Moreno’s experience and some of her statements and views, but values Hume’s experience as a councilman in one of the county’s larger incorporated cities more.

Moreno, who’s been in her position of president since 2018, said she grew up in a community where political discourse wasn’t encouraged. After the 2016 presidential election, her focus changed as she began to take an interest in political activism. At that time, she began learning more about her local community — who was in charge, what their policies were and how officials affect the lives of their constituents.

Working with the Cosumnes Services District, Moreno said she’s pointed her focus on ensuring that people from all ages and demographics have a clear understanding of those same decision-making processes she eventually had to learn about during her political awakening.

“The perspective of young people is important,” Moreno said. “I have a 15 and 12 year old. As funny as it sounds, I always talk to them about policy to see what important issues are impacting their lives. Of course, homelessness comes up.”

Hume did not respond to requests for an interview in a timely manner. When Hume recently spoke with The Sacramento Bee, he said that addressing homelessness in a “meaningful way” was among the biggest concerns with voters he communicated with. In that interview, he placed it at a higher priority than climate change.

“Homelessness is a humanitarian, economic, environmental and public safety crisis,” Hume told The Bee. “But, it is not an ‘issue,’ it is a collection of people, many of whom require serious help. My plan focuses around tough love.”

Hume went on to add that the initial steps will be to enforce existing laws to maintain standards regardless of a person’s housing situation.

Hume also told The Elk Grove Citizen that he fully supported changes to homeless camping policy put through in June by the Elk Grove City Council, which banned encampments near school, playgrounds and other facilities. Hume said the goal of that unanimous vote was to “compel better behavior,” so that unhoused people and those engaging with housing assistance can get access to programs that help to lead them into an improved livelihood.

Moreno expressed concerns with laying the focus so heavily on calling for a more stern implementation of law enforcement when addressing homeless camps. She said that she does believe it’s important to hold people accountable and expect them to help themselves, but it’s important to offer solutions that don’t focus on punishment for those already in a vulnerable situation.

“My opponent also advocated from the dais for a $100 fine to go with the no camping ordinance for people who are homeless,” Moreno said in response to Hume’s tough love comment. “Everyone needs a hand up sometimes. We need permanent supportive housing options for people to be able to relocate into a community.”

The camping policy Hume supported was written by city staff and Elk Grove’s homeless ad hoc committee, headed by himself and City Council Member Stephanie Nguyen. Hume told The Elk Grove Citizen that the ordinance isn’t intended to be a punishment for the unhoused.

“The fine component, which was removed before the ordinance was passed, was only there as a final straw if the person failed to comply as directed,” Hume remarked at the time. “It doesn’t matter whether one is housed or unhoused, there are consequences for bad behavior.”

When considering how currently active programs can be improved, Moreno discussed efforts like Project Turnkey, which TK. One of Moreno’s supporters — who claimed to be unhoused for five years — contacted her through her campaign website, explaining that a medical emergency left her without a job and without a home. Project Turnkey helped the woman have a roof over her head for more than two years, but the opportunity came with some unforeseen challenges.

“Yes, she needs to be accountable, but to what end?” Moreno noted. “She can’t have people enter her own room. She doesn’t have access to a key to her own room. She has to be let in by staff. There’s a microwave in the room but no other ability to cook fresh food, so she’s been living on processed foods for two and a half years and has an overwhelming sense of loneliness because she can’t have friends over.”

Moreno said she wonders what can be done to improve the situation of people like the woman who’d reached out to her. “What can we do to create a sense of purpose and community for her?” Moreno wondered aloud.

Hume’s statements on where he’d begin as the supervisor of District 5 echoed his aforementioned sentiment that people who need services should be obligated to take advantage of what’s available. He also emphasized the importance of “clear and defined metrics” for services and programs designed to help the unhoused, and those seeking housing assistance, to ensure there’s a positive impact on that population.

“We have to figure out how we can compel accepting the help that is being offered,” Hume told The Bee. “The goal is to move people out of homelessness. It doesn’t help anyone if we continue spending money on the wrong things.”

He went on to say that affordable housing is in short supply and that the clearest solution to lifting more people out of homelessness is to increase the stock of affordable housing on the market. According to him, that includes incentives for developers to build on vacant lots in urbanized areas and underperforming properties.

“Failing to respond to consumer demand results in rents that are out of reach, lost opportunities for homeownership and gentrification of fragile neighborhoods,” Hume was quoted as saying.

Nottoli has decades of experience confronting homelessness and housing affordability throughout Sacramento County, painting a particularly well-informed perspective on the former. The outgoing supervisor acknowledged both challenges are dominating the conversation right now.

“It’s not just Sacramento, obviously, it’s certainly across the state,” Nottoli reflected, adding that tackling the homeless problem has always complicated because it involves both services from incorporated cities, as well as the county government, with the county being a significant conduit for funding and infrastructure around behavioral health, substance abuse treatment and social services.

Nottoli also stressed that working with nonprofits and private developers becomes critical to tackle the homeless-housing nexus. “It’s very apparent that this is a very critical issue,” Nottoli acknowledged. He says it will be of utmost importance for the incoming supervisor to continue to devote time, effort and expertise to this issue, while collaborating with others in the community to accomplish difficult goals.

“I think there’s been some really good groundwork laid and there continues to be discussions and deliberation in the community about what’s the best approach,” Nottoli said. “But, also more broadly [incoming supervisors need to work] with others in leadership positions. The faith community has been a part of that. So, you know, there are a number of organizations to advocate for folks who don’t have a very strong voice. I just think we have to continue to work together as a community because again, it’s not an issue that’s going to be easily solved.”

One critical voting issue that might come before Nottoli’s replacement involves the lack of tenant protections for anyone renting within unincorporated Sacramento County. Plainly stated, those tenants have zero protections from massive rent hikes and unjustified evictions. This is in stark contrast to those renters who live within the city limits of Sacramento. The city passed The Tenant Protection Act of 2019, which limits annual rent hikes according to the Consumer Price Index and bans no-cause evictions

Hume hasn’t responded to questions about whether renters in unincorporated Sacramento should have those same safety rails. On the campaign trail, he’s continued to focus on his talking points around addressing the root causes of what sends people into homelessness or what keeps them from climbing out of it. Based on Hume’s prior statements, for him that seems to be mainly mental health and addiction.

Moreno said she wants to take a look at what’s working, and what isn’t, so she can better develop a strategy around tenant protection solutions.

“I think that we have the opportunity right here in our community to see the effects of that current plan,” she said. “And I want to see the data before I make my decision on how the county’s going to move forward with tenant protections.”

2 Comments on "For those worried about homelessness and skyrocketing rents in Sacramento County, the stakes for the D5 supervisor race couldn’t be higher"