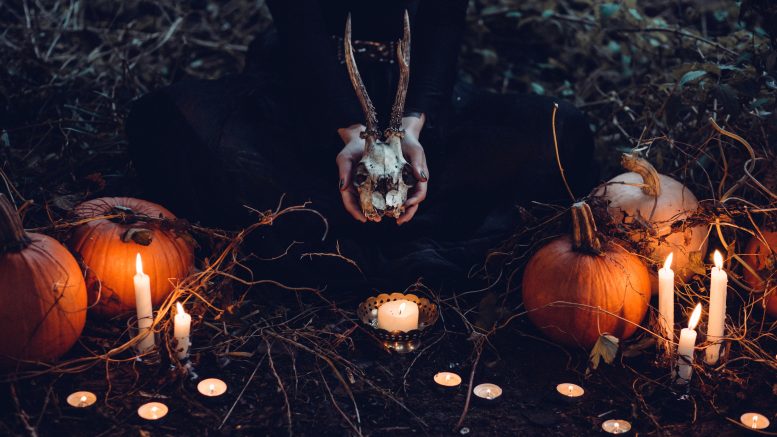 There’s a certain addiction to what makes our skin crawl, to what makes our hearts jump – to those unknown things that go bump in the night. The Halloween season is about embracing the way fear makes us feel alive, not to mention the eerie allure of masking ourselves behind different faces. Sometimes those costumes involve the living. Sometimes they’re a tribute to the dead. Either way, they symbolize the imagined transcendence of escape. So, fear not because between now and Halloween night California’s capital has plenty of chances to indulge in this little window for the wild side.

An array of terrifying turns and traps await those entering Sacramento Scream Park between now and All Hallow’s Eve. The maze of madness constitutes one location with three chilling attractions. The first is called The Blind Asylum, an old school bin of brain-bending meant to conjure those worst hallucinations of the psyche ward. Another is called the Louisiana Catacombs, a lost hell-house filled with enough swamp witches and voodoo vengeance to make the hairs on your neck start jumping. Finally, the park features the Skull Ripper Haunted Mansion, a Victorian nightmare that plays on the darkest notes of our cultural traditions. Park hours are [what]. The Sacramento Scream Park is located 4909 Auburn Boulevard near Madison Avenue. Ticket prices range from $19 to $32 and be purchased here.

Hosted by the environmentally friendly nonprofit Atrium 916, this craft-making café near Sacramento’s old waterfront will be dedicated to Halloween decorations and flare – all paired with a pot of Vampire Tea or brewed Kombucha. The all-ages event includes clay sculpting, canvass painting and copious buckets of candy. The Atrium 916 gallery strives to use recycled materials and a zero-waste approach to its crafting and art activities. Times for the Halloween café run between 10 a.m and 5 p.m. Ticket prices range between $15 and $22. The studio is located at 1020 Front Street in Old Sacramento.

Dark-season revelers who want to dance to something better than the Monster Mash can join the team at Stomp! Midtown for a feet-moving cacophony of costumes on Oct. 28. The evening starts with swinging DJ’d tunes from Gary Sharpe, followed by dance instruction at 8 p.m. and then a dancefloor costume parade around 10:15 p.m. Costume winners from previous years have included “The Battleship,” The Mad Hatter and Adam without Eve. The action starts at 8 p.m. Tickets can be purchased here. Midtown Stomp is located at 2534 Industrial Boulevard in suite 150 in West Sacramento.

Join a costume party and live music extravaganza at The Russ Room above Solomon’s Deli on K Street. This show will mix musical genres to create an “emo-rap meets pop-punk” celebration for the walking dead. The lineup features D.J. Buss, Down Benny, Emo Fly Trap, Luustorm Loseher, Jet Black, Halibut Head and Blood Honey. The performances will be followed by an after party at Golden Bear. The show starts at 8 p.m. The Russ Room is located at 730 K Street.

The Crest Theatre presents a midnight screening of ‘The Lost Boys’ – Oct. 28

The cult classic that fused 80s’ punk sensibilities with haunted children’s choirs and blood-sucking savagery is coming back to the big screen. Not only is it returning, it will be flickering through the Gilded Age ambiance of the Crest Theatre leading up to Halloween. Staring Jason Patrick, Corey Haim and Kiefer Sutherland, “The Lost Boys” follows two brothers moving to a beach town that looks strangely like Santa Cruz. Their attempts to settle in are quickly complicated by an encounter with a gang of young, rebellious vampires, as well as two nerdy brothers determined to expose them. Both visually stunning and musically effecting, “The Lost Boys” has become a staple in the modern fang-gang genre. Tickets can be bought here. The Crest Theatre is located at 1013 K Street in Sacramento.

Step through some curtains into the theater of the mind with the last showing of ‘Wolves.’ This claustrophobic urban nightmare delves into concepts of full moon fever, showcasing all of Big Idea Theatre’s cerebral edginess in a way that makes for a genuinely unique Halloween-time experience. “Wolves” is a darkly probing tale written by Steve Yockey, the playwright behind HBO Max’s “The Flight Attendant” and upcoming black comedy, “Cindy Snow.” Tickets for the final staging are $18 and can be purchased here. Big Idea Theatre is located at 1616 Del Paso Blvd in Sacramento.

On Halloween night, Alfred Hitchcock’s groundbreaking thriller ‘Psycho’ will play inside the kind of historic movie palace that first debuted it back in 1960.  Written by a young Joseph Stefano while he was in therapy about his mother, ‘Psycho’ ventured into to new territory for American cinema, both in its uncomfortable exploration of a killer’s mindset, as well as its pioneering use of jarring editing cuts and shocking violence. Over the years, the film has also been hailed for its memorable performances from stars Anthony Perkins and Janet Leigh. “Psycho” ushered in a new era of heart-stopping thrillers; and on Halloween night, Sacramantans can see where it all started. Tickets can be bought here. The Tower Theatre is at 2508 Land Park Drive.