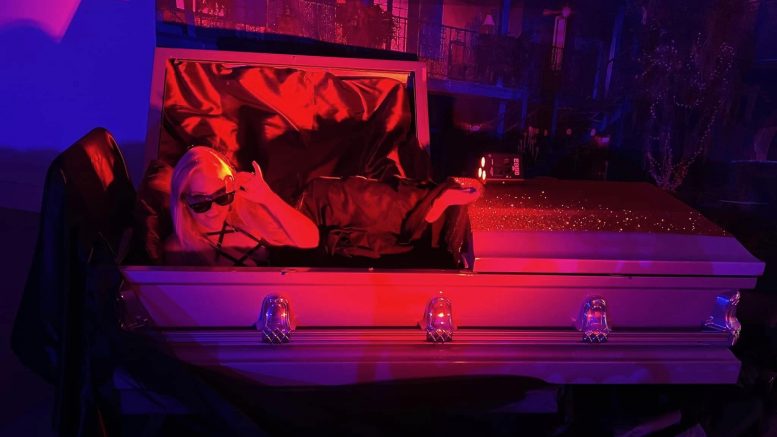 Shannon McCabe peaking out of a coffin. Courtesy photo.

Shannon McCabe is about to mark her 14th year of hosting the Capital City’s ultimate spectacle for elaborate costumes and vampiric trade-craft. But 2022’s goblin-time go-around will be a little different: This upcoming evening of mischievous fun will be a tribute to one of McCabe’s favorite authors, the late Anne Rice, whose novels in the 1970s and 80s inspired a global renaissance in Gothic literature. Those books also played a role in initially getting McCabe interested in vampire culture.

Rice died last year, and McCabe isn’t missing a beat to make her next stylish fang-fest a tribute: Not only is McCabe bringing her usual dark musical forces to bear on the night, as well as the sultry, flesh-flashing dances of the damn – she’ll tailor it all in a way to pay tribute to Rice’s preternatural hedonism on the page. After that, McCabe will cap off the event by jetting off to Rice’s home city of New Orleans. She’ll then spend Halloween in the Big Easy preparing for a bayou-inspired Day of the Dead – one decorated with voodoo insignias and artisan skulls forged by her friend, Ricardo Pustanio.

SN&R recently caught up with McCabe to talk about Vampire Ball’s return to Harlow’s on Oct. 29. We also touched on the event’s live performances from Ashes Fallen and A Death in Bloom; its first-ever burlesque show; and its entertainment shepherded by long-time event staple D.J. Bryan Hawk.

SN&R: What inspired you to dedicate this year’s ball to Anne Rice?

McCabe: “The death of Anne Rice was a major blow to the vampyre community. We all basically worship her and her writings. She’s why I came to love vampires as I do today. I have read most of her writings, and I can say that she is a genius. Her work is absolutely mind-blowing and can take you into whole other worlds: Worlds of vampires, witches – and even Sleeping Beauty… What I also love about her is that she lived what she wrote. She bought herself a giant mansion in the Garden District of New Orleans and had a husband who resembled ‘Lestat De Lioncourt.’ She also dabbled in many things that most people don’t get the pleasure of partaking in.  She lived, and did it so well. So, this is why we celebrate HER this season. My 14th season.”

SN&R: What’s your approach to keeping all of the basic ingredients that Sacramentans love about the Shannon McCabe’s Vampire Ball while still finding ways to make each event feel fresh?

McCabe: People love dancing, drinking, costumes and live music. These are always things you will find at my Vampire Ball. For dancing, I have DJ Tomas Diabo from the Cat Club in San Francisco, and our resident DJ, Bryan Hawk, who’s celebrating his 12th season with my Vampire Ball! They play great vampyre and Halloween music to keep the masses moving. We also have live music from our house bands, A Death in Bloom, who keep the party seriously rocking on the Harlow’s stage; and upstairs we have Ashes Fallen, our favorite goth rocker vamps who live inside an actual chapel! Both bands are super, and I am excited to see them again. Vampyres and people can travel around our party instead of getting stuck in one area. It’s much more exciting if you experience the movement and flow of our party.

SN&R: Why did you want to add a burlesque show to this year’s event?

McCabe: This year I couldn’t be more excited to have some of Sacramento’s famous faces gracing my stages as vampyres this season. Burlesque stars Jean Heart and the fiery Starlet O’Hara, as well as Sassherass Siren, Sugar Cheeks, Indiana Bones and Ana Maria Perales with her AMPED Entertainment Dancers. Our own Ivan Rocha will be rocking some 90’s Lestat. We even have Kira Knightengale on her cello. We are an eclectic mix of vampyres and I can’t wait to see them perform for us! This go-around, we’ll have a very tight schedule of performers, so you can technically see everything if you keep that schedule handy all night.”

SN&R: I noticed you spell “Vampire” with a ‘y’ sometimes: Will you explain this?

McCabe: “We vampyres refer to ourselves as ‘Vampyre,’ as it’s the Old World spelling that we prefer.  When we refer to the general term ‘vampire’ we use an “I,” as with the Vampire Ball.  My dear brother, Father Sebastiaan from Endless Night Vampire Ball, came up with the spelling and it stuck – just like fangs in your neck!”

SN&R: Tell us why you’re flying off to New Orleans right after the Vampire Ball? What will you be doing there?

McCabe: I am headed to New Orleans on Halloween morning with my mother, Elisa, Tate from A Death in Bloom, and Joseph Gormley and Tim Hawkins – the pair who are portraying Louis and Lestat at my Vampire Ball, to visit with my great friend and Mardi Gras Artiste Extraordinaire, Ricardo Pustanio.

Ricardo and I will be helping host a party on Day of the Dead, or Fet Gede, in the Voodoo world.  This party happens on the eve of November 1st. We will have beautiful altars built by local artists, surrounded by the beautiful Mardi Gras  paper mache statues that Ricardo has created over the past 25 years.  The party, “Fet Gede,” is a celebration of all things voodoo and our ancestors. It’s such a magical night and it’s hosted by the New Orleans Healing Center and the Voodoo Queen, Sallie Ann Glassman. It is a free event to all in New Orleans. I am so excited to see the 60 new sculls that Ricardo Pustanio has created for his altar. They are all free-sculpted, and so detailed, they will be a sight to behold!  I am also thrilled to participate in a Vodou ritual with the queen.

SN&R: Being that New Orleans is famously Anne Rice’s hometown and creative muse, will you be thinking about her while you’re there?

McCabe: I will be thinking of Anne Rice, as a matter of fact, because we’re taking some of our favorite vampyres from around the world to visit our family tomb in St Louis Cemetery Number 1 in New Orleans.  We will ascend upon the cemetery the morning of Fet Gede to pay tribute to our ancestors, and of course the amazing author Anne Rice. She is buried in Metarie Cemetery but we’ll be in our family cemetery with Marie Laveau and the very much alive, Nicholas Cage. They both have tombs there. Many of my vampyre friends are in NOLA, as they host the Endless Night Vampire Ball at the House of Blues on the same night as my Vampire Ball in Sacramento.  It is always fang-tastic to get together with my kind in such a haunted city during Halloween. It’s Magic!”