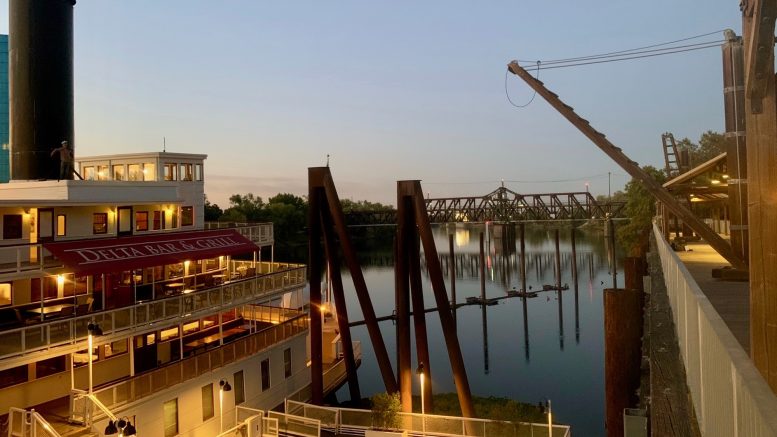 The Delta King at sundown. Photograph by Scott Thomas Anderson

There’s a menacing mythos along the edges of Sacramento’s waterfront, an array of spoken stories reaching from the Delta King’s pilot house to those iron bridge-plates where the river bends against a spectral red before nightfall. These “twice-told tales” include disembodied whispers scurrying through the Brannon House; lights flickering behind the steal fire doors of the original Supreme Court; chairs and glass being shattered by a prospector’s wraith in the River City Saloon. With few exceptions, the area’s fright-fables tend to hover around the Sacramento River, emanating off its oldest docks in both directions, surviving from the hidden alleys of Colusa to the rickety former opium dens of Locke. They’re remarkable claims – and chilling ones. In the Colusa, the sighting are said to include a woman’s apparition who fades before the eyes. In Locke, it’s reports of a sinister hiss warning he’s the devil.

But what gave birth to all these legends?

According to dead newspapermen of the past, they’re tied to a whole lot of violence and tragedy that played out, over time, on California’s longest river.

One of those incidents happened on March 18, 1908, just upstream from Sacramento’s waterfront. An Italian immigrant, Antonio Capollo, was attacked by a fellow countryman, Joseph Plaraino, on the Yolo side of the river. Reporters who covered the crime identified the initial motive as being robbery. Whatever was driving Capollo, he pulled out a large knife and started slashing the other man to ribbons: A writer for The Press-Democrat called Capollo’s act “one of the most atrocious murders in the history of the county.” The killer then dragged Plaraino’s body along the levee, ultimately throwing it into the waves of The Sacramento. The slaying happened only a few bends north of where the I Street bridge was constructed not long after. Capollo was promptly arrested. On April 30, 1908, he was sentenced to be hanged at Folsom Prison.

Just three years later, authorities were confronted with another horrifying discovery connected to the Sacramento River. It was the morning of April 21, 1911 when a few campers along the riverbank west of Chico noticed a wagon alongside the shore. They also found a letter nearby addressed to a Mr. O. M. Baker of Colusa. Studying the scene, the campers spotted something that might have made their hearts skip.

“A blood-stained ax, a club clotted with blood, a pile of ashes in the center of which were charred human bones, and a metal clasp,” is how The Colusa Daily Sun described it. “The campers searched the premises further and found other evidences that a crime had been committed. A flour sack, saturated with blood, was also found, and adhering to the sack were several short human hairs of a light brown-color … The bed of the wagon was covered with blood, and the wheels, rear axle and sides were also bespattered with blood. The owner of the wagon was not to be found, nor were the horses.”

Arriving law enforcement officers determined that Baker was not the victim: The remains, in fact, belonged to a woman. The officers believed that after the lady was mutilated, her killer had shoved what was left of her over the crest of a levee, sliding the ghoulish mess down the embankment. Police launched a broad search for clues and a suspect, though nothing came of it.

This failure clearly frustrated the journalists in Colusa.

“The murder is one of the most mysterious that has confronted the police of Northern California, as the officers have only the slightest of clues to work on,” The Sun observed. “It is evident that the crime was carried out with deliberation and cunning, and that the plans were well-laid. It is held by the officers that the killing was done away from the river, and that the fiend drove to the stream to get rid of the corpse.”

Yet there would soon be other “fiends” prowling the river. In spring of 1924, the city of Sacramento was throwing a huge 75th anniversary celebration around California’s discovery of gold. Officials called it ‘49 Day.’ Their gala brought crowds out reveling; but one young man –22-year-old D.L. Ingram – had darker intentions on his mind. Ingram used the bustling confusion to sneak up on a stranger, kill the man without warning, and then rob his lifeless body.

Ingram ultimately threw his victim into the river. He soon lit out of Sacramento, heading north up the waterway. However, Ingram later decided to end his flight from justice. Fearing that he was slowly going insane, the fugitive turned himself into authorities in Crescent City. He confessed to the murder, though didn’t know the name of the man whose life he’d taken.

Beginning in the 1930s, a score of grisly discoveries were made along the Sacramento River, crimes that stretched from the central Delta to where the modern Rio City Café stands today. It started in early March of 1931, when a headless body was found anchored down in the waters off the town of Rio Vista. The Sacramento chief of the State Bureau of Criminal Identification was eventually able to determine that this corpse belonged to a 32-year-old Indian immigrant named Sant Ram Pande. It was a revelation that shocked and disturbed the journalists working on the river as they investigated Pande’s background.

“[He] left the University of California last fall to ferret-out a murder ring believed responsible for the death of several of his countrymen,” The Colusa Herald wrote. “A six-month investigation, in which he was associated with prominent Hindu leaders in the Sacramento region, ended in death, presumably at the hands of members of the same murder ring.”

Five months later, another headless body was found, this time in Sacramento’s William Land Park. At first, county coroner Dr. C. H. McDonald didn’t have any reason to suspect this murder was tied to the local waterways – that is, until a human head was located the following July “sticking out of the sands of the American River near the Sacramento northern bridge.”

McDonald suspected the two gruesome discoveries were connected, though he couldn’t be sure.

“So many bodies are lost in the river and never found that it is difficult to make identifications,” McDonald admitted to reporters.

His point was soon reinforced on May 19, 1934, when The Madera Tribune ran the headline, ‘Another Delta Death Puzzle at Sacramento.’

“Another Delta murder mystery was under investigation by authorities today,” The Tribune’s capital reporter noted, “following the discovery of the body of a 40-year-old Japanese man in the Sacramento River near Sherman’s Island.”

Arrests were never made in most of these savage, Depression-era killings that plagued the Sacramento River. Over decades, those unsolved crimes helped make the tributary not only a river of memories – but a river of secrets.

And a river of stories.

Sacramento’s haunted history is more than a ghost story