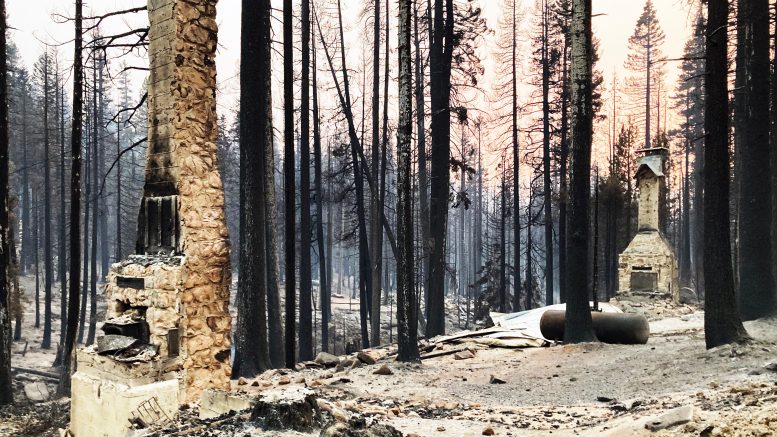 Homes were leveled by the Caldor Fire in 2021. (Photo by Ken Magri)

After a wildfire is extinguished, there is a natural concern for the environment and what kinds of long-term damage it will sustain. But a whole new set of problems begin for those unfortunate Californians who lost their residence in the blaze.

In a state already plagued by high housing costs, the need for affordable housing due to wildfires creates an aftermath of crisis. Whether these displaced residents are homeowners, renters or living in subsidized housing, their need is the same: finding a new place to live.

In the last five years, Northern California wildfires destroyed whole towns such as Greenville, Berry Creek and Grizzly Flats, and severely wounded Lake Shastina, Paradise and Magalia. Last month, the Mosquito Fire came within feet of torching the town of Foresthill in Placer County and taking it off the California map as well.

By the time it came under control, the Mosquito Fire had burned fewer than 100 homes. But by contrast, last year’s Dixie and Caldor Fires, which traversed the width of the Cascades and Sierra Nevada, together destroyed about 2,000 homes. The 2018 Camp Fire in Paradise, in Butte County, took out 11,000 homes, and 2017’s Tubbs Fire in Santa Rosa destroyed 5,200 homes.

In the aftermath of any wildfire, residents must scramble to find a new living situation, often seeking housing nearby. But for nearby cities, the onrush of displaced people puts significant pressure on existing infrastructure.

The Butte County Housing Authority, which typically receives around 1,100 annual applications for Section 8 subsidized housing, accepted 4,700 applications from Camp Fire victims. After dealing with evacuees for an 18-month period, the financial impact for Chico, Butte County’s largest city, had grown to an estimated $500 million.

After the Camp Fire, there were several ways for evacuees to get help with a place to live. But they had to navigate federal and state bureaucracies and nonprofit organizations to find the specific assistance they needed.

The U.S. Department of Agriculture offered low-interest home loans and payment assistance for low-income families who wished to rebuild or repair a home after a wildfire. The California Governor’s Office of Emergency Services created a recovery mission that removed fire debris from residential properties and assisted local partners in regaining lost utility services after a wildfire. Former Gov. Jerry Brown extended price-gouging restrictions in counties where renters were being affected by wildfires.

The California Apartment Association began listing special rental opportunities for wildfire victims, offered by apartment complexes across the state, including several in Sacramento. The special deals included no application fees, a streamlined application process, month-to-month arrangements and most importantly, a discount on rental rates.

Why is this happening?

Much of the problem with the increased destruction of homes is caused by too much residential development in what researchers call the wildland urban interface (WUI). The WUI is a transition area between the built environment and unoccupied land, where human development meets wildland or vegative fuels, according to the U.S. Fire Administration.

In plain language, the deeper into California forests developments go, the greater the fire risk. Development often occurs in these areas because the land is cheaper and cities have prevented more housing development in urban areas.

Over 60,000 communities in the United States are at risk for WUI fires. California’s fire risk maps show that over 8% of all California homes are located in WUI zones. But because the state’s data goes back 15 years, it is estimated that the real percentage, based on development trends, is significantly higher.

The high cost of insurance

One of the biggest factors that keep people from rebuilding within the WUI is the challenge of affordable fire insurance. In some cases, the cost is so much that higher-income homeowners will pool resources to hire private firefighters in lieu of insurance. Meanwhile, their low-income neighbors often go uninsured as well, but without any backup plan.

During last month’s Mosquito Fire, three residents from the Hillcrest Mobile Home Park in Foresthill said they were all uninsured for fire. Is there something residents could do to their homes to make fire insurance policies affordable?

The New York Times reported that after California adopted stricter building codes in 2008, over 50% of 350 homes that were subsequently built in Paradise were undamaged. That contrasts with just 18% of undamaged homes built before the 2008 codes.

Existing Paradise ordinances covered some of the requirements of this program. Modifications were passed last May to bring the town in line with all of the remaining standards. These include requiring ember-resistant roofs, decks, fences, gutters, ventilation screens and defensible ground space.

“The [California] Department of Insurance is trying to find a way, working with insurance companies, to lower rates through hardening the home,” said Wendy Mazzoni, a Sacramento Farmers Insurance agent.

Currently, Mazzoni added, insurance companies cannot feasibly go into the home of every policy owner to inspect for what is truly installed. “Therefore, they have to draw fire lines based on about 11 other factors,” she said.

But last month Insurance Commissioner Ricardo Lara submitted his insurance pricing regulation to the California Office of Administrative Law. It would officially recognize and allow for lower rates if enough wildfire safety and mitigation efforts are made by the client.

A 2021 study called “Rebuilding for a Resilient Recovery” was undertaken by the nonprofit, nonpartisan organization, NEXT10. Its purpose was to reshape the ways in which Californians rebuild after wildfires, with attention paid to mitigating future fires and the destruction they cause. The study focused on the 2017 Tubbs Fire in Santa Rosa, the 2017 Thomas Fire in Ventura, and the 2018 Camp Fire in Paradise.

One strategy can be thought of as “rebuilding as usual.” In regard to the city of Paradise, the NEXT10 study examined three different rebuilding strategies that each differ in size and future fire risks. It estimated that 25% of Paradise residents would rebuild as usual, in the same manner as their original residence. But there were two big problems hindering their efforts.

The first problem was under-insured homes. Over 60% of Camp Fire homeowners who wanted to replace their homes were underinsured “in excess of $100,000,” according to the study. Home insurance payouts are based on the fair-market value of the house, not the current cost of replacement. A larger policy designed to completely replace a home in a fire-prone area is often too expensive for residents to afford. This under-insurance problem sent some Paradise residents out of town and out of state for more affordable living situations.

For homeowners who could afford to replace, or were willing to rebuild with less, the new problem was securing nearby temporary housing during the rebuilding process. The NEXT10 study reported that a sudden influx of approximately 26,000 people who had lost their residences in the Camp Fire, was spread out across Butte, Sutter and Yuba counties.

For these reasons, the rebuild-as-usual scenario was judged to be the least effective. It did nothing to lower future fire risks, nor did it address the issues of affordable housing and future growth.

“Managed retreat” is a more thoughtful strategy that seeks to reduce the number of returning residents by incentivizing them to relocate in other urban locations within the region, like Chico, Redding or Sacramento. The aim is to reduce the population in Paradise by as much as 75%.

Returning residents would be relocated into smaller housing areas, reconfigured so they can be surrounded by “green buffers” and be better protected. By using public parks with fewer trees, or simply leaving surrounding lands barren, a green buffer acts as a fire break. If properly maintained, these new land configurations will stop or significantly delay a fire’s progress.

The reasoning behind such a dramatic reduction of population is that, in spite of any and all fire protection strategies, another disaster-sized fire on the scale of the Caldor or Dixie could wipe out more towns like Grizzly Flats and Greenville. In the end, the easiest way to protect people from wildfire disasters is to reduce their population in WUI zones.

The “resilience nodes” scenario relies on more groupings of manufactured houses, as opposed to single-family homes on individual lots. This rebuilding scenario allows more affordability for a larger population, with room leftover for future growth, while still providing fire protection. “Manufactured housing communities are more energy and resource efficient than single family homes and can be sited in more space-efficient ways,” according to the study.

The smaller and more affordable manufactured homes (also known as mobile homes) are located closer together in concentrated land areas. Closer grouping means there is less space to be defended. Added fire breaks and green buffers around all structures provide additional protection.

Resilience nodes are seen as the only scenario that deals effectively with the need for low-income housing in communities dense with vegetation. This plan rebuilds with newly designed homes, placed on a site that pays close attention to fire safety strategies. That is a marked contrast from some of the well-worn, overgrown, mobile home parks that punctuate California’s rural towns today.

While trying to recommend one rebuilding scenario in particular, the NEXT10 study considered local economics, land use, environmental impact, the need for infrastructure and impact on a community’s tax base. Each scenario had different advantages and disadvantages, so none was recommended.

But, the study concluded with a clear warning about the dangers of “sprawling single-family land use development.”

Home hardening lowers insurance rates, which makes housing more affordable. But cooperation is needed from both the homeowner and insurance companies.

“Insurance rates are the key to safe and affordable rebuilding in areas affected by wildfires,” Mazzoni pointed out. “I would imagine that if we don’t have a vested interest from homeowners and insurance companies both, home insurance will continue to rise and we will lose more carriers in California offering coverage.”

The term “vested interest” means hardening the home in the ways mentioned above; but Mazzoni also stressed building near fire hydrants and maintaining full-time fire departments to earn credits from insurance companies for communities helping to mitigate the risk.

“Otherwise,” she said, “catastrophic events will rise, and carriers will fall.”

TOPICS:wildfires and housing problems in California