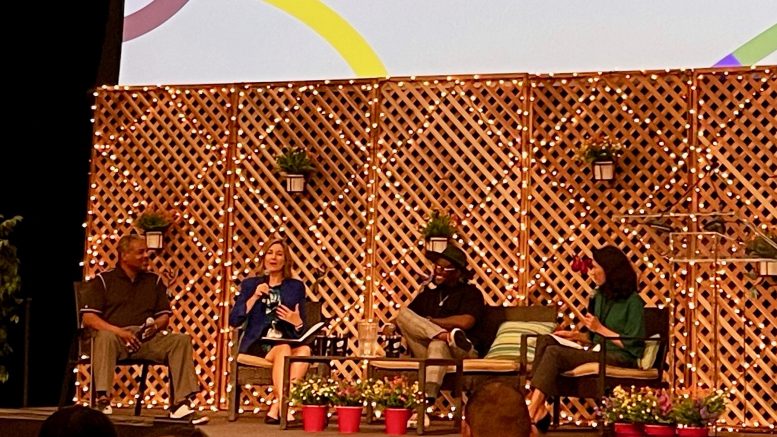 For the preceding six hours in a ballroom at California State University, Sacramento, a who’s-who of elected officials, such as Rep. Ami Bera (D-Elk Grove) and other policymakers and stakeholders, had gathered for a day focused on improving the wellness of residents around the Sacramento region — and acknowledging some stark truths.

“Just having all these people in the room alone was enough,” Schmidt said. “But then the ideas that people brought, the level of engagement of the audience around the table, the quality of speakers, I was just really excited by the whole thing.”

But it remains to be seen how the roughly 315 people in attendance will take the information from the summit back to their communities and use it to improve quality of life at a time many in the region are struggling, as shown by the results of the new Valley Vision’s Livability Poll, which was highlighted during the event.

The summit kicked off, inadvertently, with a major symbol of why so many have struggled in the past two years. Scheduled opening remarks by Sacramento State President Robert S. Nelsen couldn’t be given since he was “a little under the weather because of COVID,” said the speaker in his place, Los Rios Community College District Chancellor Brian King.

Soon after opening remarks, Schmidt presented results of the just-released Livability Poll, fielded in June and July with 1,887 respondents. She told attendees, “The data that we got back from this poll was very disheartening.”

Among the findings of the poll, 30 percent of residents said they either couldn’t or could barely afford an adequate food supply, 52 percent said they’d felt depression or hopelessness in the past week, and 81 percent said they’d felt stress or anxiety in that time period. In terms of housing, residents ranked its cost as their second-highest concern behind homelessness. Twenty-eight percent of residents also rated the Sacramento region as a poor place to purchase a home.

Kevin Daniel, a community outreach and strategic partnerships analyst for the City of Sacramento, later said people should read the report. “I know sometimes nowadays facts don’t mean a lot. But people [have] got to read and hopefully come to a conclusion that there is something going on and we got to find some solutions.”

Gore told the crowd that Placer County was “working really hard” to become pro-housing and that code changes were now allowing mixed-used development. Jennings noted how Sacramento had become the first jurisdiction in the state to receive a pro-housing designation by the California Department of Housing and Community Development.

Davis told the crowd about helping to redevelop Oak Park, but missing out on homeownership there. Gentrification and other factors have led to steeply increasing home prices for the neighborhood. He mentioned prices being around $150,000 in the early 2010s, when he first considered buying in the area, compared to about $800,000 now. “For us, nine years ago being there, people told us to buy a house,” Davis, who is Black, told the crowd. “We didn’t even understand why.”

There was also a panel on one of the most glaring current crises in the Sacramento region, homelessness, with Schmidt telling the crowd, “We have about 30 minutes to talk about an issue we could easily talk about all day.”

Already, the summit had highlighted that the number of people experiencing homelessness in Sacramento County almost doubled between 2019 and 2022. Some of the discussion centered on homelessness along the American River Parkway, where county leaders recently took action to break up camping sites. Panelists didn’t necessarily seem to think the county’s approach was sufficient.

“It’s one thing to move people off the parkway,” WellSpace Health CEO Dr. Jonathan Porteus told attendees. “It’s another to bring them to a home.”

Lisa Bates, CEO of homeless services provider Sacramento Steps Forward, later said she thought the summit was great. “I think that these are very critical issues for our community and we need to have forums where we can come together and begin to talk about them. I’m really looking forward to how we can take this to the next level.”

Schmidt said Valley Vision intends to make this an annual event. SACOG Executive Director James Corless said after the event that his organization, which had about two-dozen board members or staffers in attendance, was likely to keep supporting it and that he was pleased with how the day went.

“I’m confident that people are leaving here inspired,” Corless said. “I’m confident that the local elected leaders and elsewhere in local government want to try to address the problem of housing unaffordability, lack of housing, and homelessness. I think we’re going to have to work really hard to figure out those solutions. … If they were easy, we would’ve done ‘em by now.”