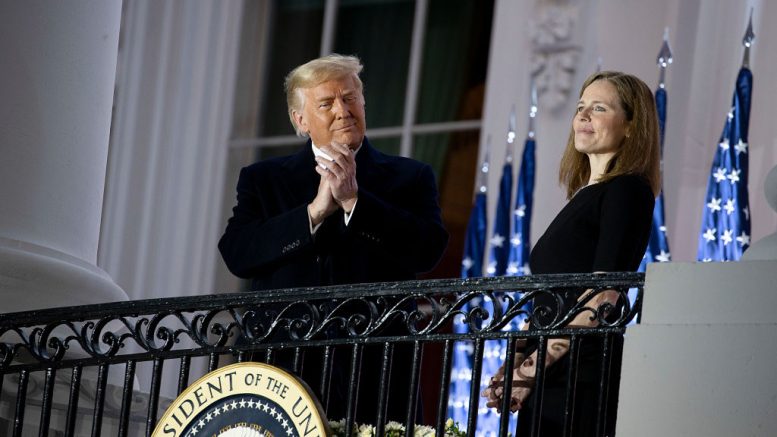 The U.S. Supreme Court dropped a bomb in late June when it agreed to hear a North Carolina gerrymandering case that legal scholars and advocates say could have dire consequences for America’s already imperiled election system.

The case in question, Moore v. Harper, could give increasingly extremist state legislatures almost unchecked power over setting the rules for federal elections. That power could be harnessed by legislatures to pass voter ID laws and other voter suppression legislation. It could be used to outlaw voter-approved independent redistricting commissions, advocates warn. And in a worst-case scenario, it could be used to subvert the will of the voters and declare the loser of the 2024 presidential election the winner, some of them argue. (The court is expected to issue its ruling before July 2023.)

The U.S. Supreme Court “will do to the presidential election what they did to Roe v. Wade,” by validating “the bizarre idea that legislators have unchallengeable power,” said Daniel Squadron, a former New York State senator who’s co-founder and executive director of the States Project, a Democratic-aligned group that has made turning statehouses blue its focus.

The case turns on the once-fringe “independent state legislature” theory, which was invoked by former President Donald Trump’s legal team in an unsuccessful effort to overturn the 2020 presidential election. It posits that the Constitution gives state legislators powers that are beyond the reach of governors, voters and state courts.

According to some, the court’s validation of that theory could pave the way for the legitimizing a future version of the Trump campaign’s fake elector scheme, in which campaign officials put forward “alternate” slates of electors in swing states that went for Biden. (Five hundred and thirty-eight individual electors represent the popular vote in the Electoral College.)

“The capstone implication of this fringe legal theory is that state legislatures could choose their own presidential electors, effectively nullifying the popular vote” in those states, warned Lala Wu, a San Francisco attorney who is executive director of Sister District, a grassroots organization that also supports state legislative candidates.

But even a less radical endorsement of the theory could enable state legislatures to use “whatever made up standards they want” to throw out disputed ballots in violation of state constitutions, said Carolyn Shapiro, a professor at the Chicago-Kent College of Law and the founder and co-director of Chicago-Kent’s Institute on the Supreme Court of the United States. “We’re in a situation where you have people who are making completely unfounded claims of fraud and where the belief that there was cheating going on has become such a strong article of faith among members of one party. There’s a real risk that [legislatures] will not count perfectly, legally cast ballots,” she said.

The court’s decision to hear Moore v. Harper has alarmed Democratic activists who were already on high alert due to the recent proliferation of state laws that politicize, interfere with and even criminalize election administration. These Democrats argue that voters should act in November to ensure a free and fair presidential election in 2024 by electing Democratic state legislators who will count all the votes that are cast in pivotal swing states.

Squadron, who has long argued that Democrats overlook statehouses at their peril, is not putting his faith in the U.S. Supreme Court. In the election disputes leading up to the 2020 election, four of the nine justices — Samuel Alito, Neil Gorsuch, Clarence Thomas and Brett Kavanaugh — indicated some level of support for independent state legislature theory. Justice Amy Coney Barrett is viewed as a key vote on the case.

“The two ways to preserve the presidential election are to hope that Amy Coney Barrett breaks ranks from her conservative colleagues — or ensures that there are enough states that will respect the vote in the presidential election,” Squadron said. His States Project is doubling down on efforts to flip Michigan, Pennsylvania and Arizona, statehouses with narrow Republican majorities

They are supporting candidates like Democrat Rachel Hood, who is running for reelection to the House of Representatives in Michigan, where almost half of Republican state legislators took steps to discredit or overturn the 2020 election.

She is noticing a difference in the electorate this cycle: Voters are more guarded at the door. “They hesitate. Some people ask right away, ‘What party you’re with?’ and then, once you identify as a Democrat, the conversation is immediately much easier. Their body language changes,” she said.

Hood’s first campaign was in 2016 for drain commissioner in Kent, a Republican county that has been trending more liberal. She said voters in her newly drawn House district are seriously worried about the state of American democracy, and that concern cuts across demographic groups and even party affiliation. (Her campaign is not doing voter outreach to hardcore Republican voters.)

“We anticipated that the doors out in the suburban parts of the district would be much more difficult, but we’re hearing from a significant number of people who we would consider independent voters that they’re not even considering voting for Republicans,” Hood said. Many of them were watching the Jan. 6 committee hearings in July when we spoke. “They come to the door, and they’re just shaking. They are so angry,” said Hood.

Will that anger be enough for Hood and other Democrats in swing districts? Democrats have been encouraged by the lopsided vote in Kansas to reject a constitutional amendment that would have made it possible to restrict abortion in the state. High profile U.S. Supreme Court rulings on guns, climate change and especially on abortion rights have contributed to the Democratic Legislative Campaign Committee and its affiliated organizations fundraising at its fastest pace ever.

Democrats have another reason to be hopeful. Due to independent redistricting commissions and court cases, some states have become more competitive than they were in the last decade when Republicans gerrymanders locked in control, with particularly negative effects for voters of color.

But there are serious headwinds. The party in power typically loses seats in the midterms. Add to that inflation growing at its fastest rate in 40 years, a lingering pandemic and supply chain snarls. President Joe Biden’s approval ratings are below 40%. Then there’s the Democrats’ track record. The party spent record sums attempting to flip more than a half-dozen state houses in 2020, a redistricting year. The party lost both chambers in New Hampshire and failed to flip a single statehousein their column, in spite of Biden’s victory.

Wu finds some hope from Sister District’s autopsy of the 2020 races. “It’s widely known that Democrats did not flip any state legislatures,” said Wu. “But what’s less widely known is that in order to flip those state legislatures it would not have taken that many more votes.” Biden won Michigan by just over 154,000 votes, but Democrats lost the Michigan State House by a margin of 8,600, according to the Sister District analysis. Some who voted for Biden supported the

“Republican [legislative] candidate. But many of them just didn’t vote at all,” she said.

Wu’s group identifies candidates like Hood who are in close raises that are also “winnable.” Her volunteers “raise money, make phone calls, write postcards and hopefully this year travel and go knock on doors,” she said.

Of course, legislative wins by Hood and other swing state Democrats would not address the weaknesses in the election system that were laid bare by Trump’s attempts to overturn the 2020 election.

“What we saw in 2020, and we will likely see again, and again, are these multipronged efforts that attack all different parts of the voting system, all with the ultimate goal of getting their person in power,” said Tom Wolf, deputy director with the New York-based Brennan Center’s Democracy Program.

State courts — and gubernatorial vetoes — provide key protections for voters, according to Wolf. If the independent state legislature theory “becomes the law of the land, those checks and balances disappear, which means that when you’re fighting that multipronged effort to put a person in power illegitimately, you have half as many — or 75% fewer weapons,” Wolf said.