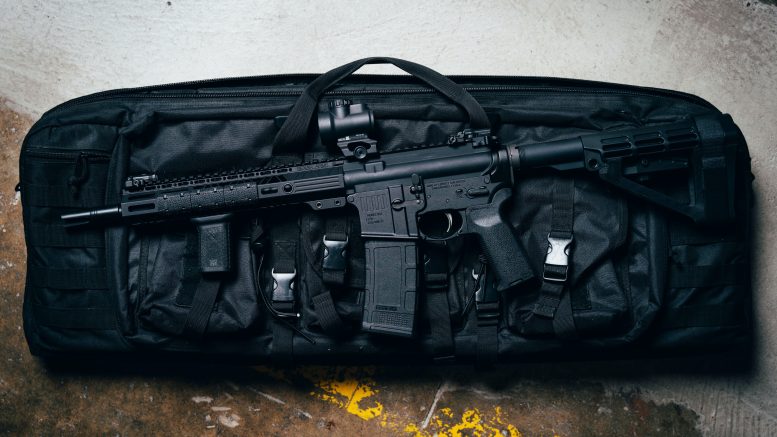 When violating parole to sell stolen weapons and illegal “ghost guns” around town, the lobby of the parole office isn’t be the best place to fish for potential customers.

That lesson settled in for a 31-year-old Sacramento gang member last month after he was sentenced to ten years in federal prison for trafficking handguns and untraceable assault weapons while on conditional release for other crimes.

According to an affidavit filed by the FBI, Dezmaighne McCain had previously been convicted of robbery, assault with a deadly weapon and being a felon in possession of a firearm before federal investigators took notice of him. Prosecutors say that on July 15, 2019, McCain was in the lobby of California State Parole office in North Highlands, after a check-in, when he struck up a conversation with another man who was there. What McCain didn’t know was that the individual he was chatting with was a former Crip member who was now working for the FBI’s gang task force. This confidential operative was wearing a wire.

As the two men talked, they walked outside of the office to have a cigarette, where they faced the Union Pacific rail line and an industrial corner of McClellan Park. They continued their conversation.

“[He] and McCain discussed work, gang life, and firearms,” FBI special agent Russell Custer wrote in the affidavit. “McCain brought up buying guns, stated that he was buying guns from a white boy, and that he currently had two firearms.”

McCain was being recorded as the gang drop-out he was speaking to inquired about some guns he might sell. McCain offered him a Smith and Wesson for $600. Authorities would later determine that this M&P 9 Shield pistol had been stolen from Butte County the year before. Between that afternoon and Aug. 19, 2019, an FBI team watched, and listened, as McCain sold numerous guns to their confidential source.

One reason McCain may have thought that the former Crip he was dealing with was trustworthy was that the man had been convicted of multiple crimes himself, including assault and voluntary manslaughter.

Driving a black Cadillac around north Sacramento County, McCain was surveilled and monitored as he sold everything from pistols made in Croatia to AR15-style assault rifles with missing serial numbers. Most of the time, McCain sold the guns from the yard of his house between Morse Manors and Watt Avenue Gardens. His prices for a weapon ranged from $700 to $2,000.

On April 6, 2022, a two-day federal jury trial ended with McCain being found guilty of three different gun crimes. Several weeks ago, U.S. District Judge William B. Shubb sentenced him to a decade behind bars.

At the start of the year, UC Davis Health’s Violence Prevention Research Program released a study that found that 3.4 million Californians had three to four experiences of violence in their background, and that some 5 million Californians personally know multiple people who have been intentionally shot with firearms.

“Our main conclusion is that almost everybody is touched by this,” UC Davis Professor Garen Wintemute wrote at the time, before adding, “at what point does living in your neighborhood resemble living in a cemetery? What does that do to your sense of a future for your community and yourself?”

Be the first to comment on "Gang member who sold guns at a Sacramento parole office, not surprisingly, didn’t get far  "