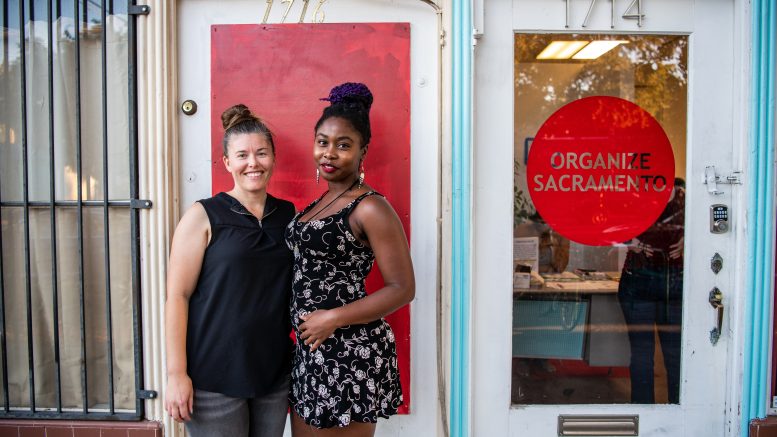 Rose Cabral, left, and Joelle Toney are the co-chairs of the Sacramento Community Land Trust, which aims to maintain housing affordability and prevent displacement in the city’s historically underserved neighborhoods. (Photos by Debbie Cunningham)

In 2018, Hasta Muerte Coffee, a worker-owned cooperative in Oakland received notice that its building’s owner put the property up for sale and had a pending offer. They worried about the displacement of not only their cooperative, but also the two low-income families that lived upstairs.

Hasta Muerte connected with the Oakland’s Community Land Trust (OakCLT), and within a month, $600,000 from 22 community investors as well as $150,000 in crowdfunded donations were secured. OakCLT also provided an equity contribution, and was able to purchase the property (the cooperative had a first right of refusal in its lease). And with that the two apartments became permanently affordable for people earning less than 80% the average area median income. Additionally, the commercial space downstairs “will always house community-serving organizations,” according to OakCLT’s website.

In Marin County’s Point Reyes, a woman recently sold her home to the Community Land Trust of West Marin for $550,000 — about half of its $1 million value — with the promise that it will be kept affordable for a future homeowner. The retired preschool teacher, who was 81 years old at the time of the sale, is able to remain living in the home until her death.

The nonprofit Sacramento Community Land Trust is attempting to do something similar to these Bay Area groups. Since the organization’s launch in 2016, the SacCLT has been soliciting donations, and preparing its goal to help people gain more access to permanently affordable housing, while also preventing displacement in the future. The organization focuses primarily on neighborhoods with historically discriminated populations, including Black people, undocumented immigrants and those who identify as LGBTQ. SacCLT describes itself “as dedicated to serving households at or below 80% area median income.”

Community land trusts originated in Georgia during the Civil Rights movement of the 1960s. Black sharecroppers in the South didn’t own their land and were being exploited. As a result, a group of activists began New Communities Inc., the nation’s first community land trust.

Many of those working on the issue of affordable housing believe community land trusts can play a vital role in maintaining affordability and preventing displacement. In the United States, there are more than 225 land trusts, according to Grounded Solutions Network. But these trusts are hard to get going because they require both a shift in mindset as well as a significant budget to acquire property.

“It’s hard for people to think of land in a different way, and that’s what [the SacCLT] is,” says Rose Cabral, co-chair of the SacCLT board and a local real estate agent.

Origins of the local land trust

The SacCLT formed from a coalition of local neighborhood groups and other organizations that were concerned about lack of affordable housing, including the Oak Park Neighborhood Association, Environmental Council of Sacramento, Midtown Neighborhood Association and Black Lives Matters. Katie Valenzuela — who has since become a Sacramento City Council member — brought the idea of a community land trust to her peers. By 2017, the SCLT had begun outreach, crafted bylaws, held its first public convention and elected its board of directors.

In 2016, the nascent SacCLT asked the City of Sacramento to consider giving several vacant lots in Oak Park to the group.

“Ten vacant parcels were up for sale from the city and usually what the City of Sacramento does is sell to the highest bidder, they don’t care what the benefit will be for the community,” says SacCLT co-chair Joelle Toney “So this coalition showed up to council and said ‘Instead of selling this land to the highest bidder, we’re able to say what’s best for our community so give these properties to [the SacCLT].’”

The city sold the land to developers, Toney says; the land came back up for sale in early 2022 and the SacCLT was in the conversation again, this time with more power. But it was once again sold to the highest bidder.

Community land trusts, like SacCLT, are a legal entity whose sole purpose is to build strong communities and keep housing affordable, Toney says.

“One of the ways that [SacCLT] does this is by organizing for housing policy change that puts people over profit,” she says.

SacCLT is working with community land trusts across the state to pass Assembly Bill 1837, which would strengthen the “housing for homeowners, not corporations” act. The group is also working with partners to create a local Tenant Opportunity to Purchase Act and Community Opportunity to Purchase Act, both of which are considered anti-displacement housing policies. TOPA gives renters the option to secure housing when their rental property goes for sale; and COPA gives qualified nonprofits the right of first offer or first refusal on certain properties for sale.

“Another way SacCLT works is by intervening when neighborhoods are at risk of increased gentrification through the sale of city-owned land,” Toney says. “When the City [of Sacramento] wants to sell a parcel of land for development, SacCLT will enter the conversation as a partner with residents to ensure that their concerns and needs are heard by potential developers.”

Additionally, a community land trust needs land in the trust to be most effective as a contributor to affordable housing in the region, Toney says. She adds that the city has promised to donate or sell SacCLT parcels of land for free or below market rate, possibly as low as $1. Private owners can also sell or donate property to the organization in an estate plan or purchase agreement. The goal is to make sure the seller “can get a little piece but keep it affordable for the next person,” Toney says.

By SacCLT preserving affordability, residents are more stable, homeownership can be expanded, and community wealth can be built. “In a speculative market, houses are bought and sold based on what the market value is for them, so the prices just go up and up,” Cabral says. “In the last two years, housing prices [in Sacramento] have gone up 35% to 40%. So that’s how it works in our current market, it’s based on what other houses have sold for in the area.”

A land trust, however, is not part of the speculative market because property is not bought and sold by individuals, but by a community land trust that has a resale structure that allows a cap on the resale price of the land and property, keeping it affordable for longer while still allowing homeowners to build some equity.

Neighborhoods can also be unfairly devalued in a speculative market. Amid the rising home prices in the Bay Area in 2020, for example, many Black neighborhoods and homes owned by Black people were coming in under value based on the appraiser. In one circumstance, a house’s value changed $500,000 between one appraiser and the next.

‘Part of our community’

The SacCLT consists of members who want to make a positive change in their community, says Toney. The membership elects an advisory council, which is made up of resident leaders representing different ZIP codes. In addition to eventually acquiring properties to place in the trust, the group is also focused on community building, advocacy and policy.

“I also encourage everyone to dig deeper into housing as a human right,” Toney says. “Housing is mental health, housing is security. If you exist, that matter has to exist somewhere, it’s fundamental. A house needs not only land to sit on but people to care for it. So humans need more than a house to live in; they need people to care for us.”

Cabral says that in times of crisis, including the seller’s market during the pandemic that saw prices skyrocket in Sacramento, a community land trust can help stabilize the community. “Rent went up, people were trying to evict people and the land trust stepped in to get resources and partner with other tenant organizations to stop evictions,” she says. “There was also a lot of advocacy with the unhoused population. They’re our neighbors too whether they have a roof or not, they are a part of our community.”

Be the first to comment on "A reason to trust: Sacramento Community Land Trust aims to put people over profit"