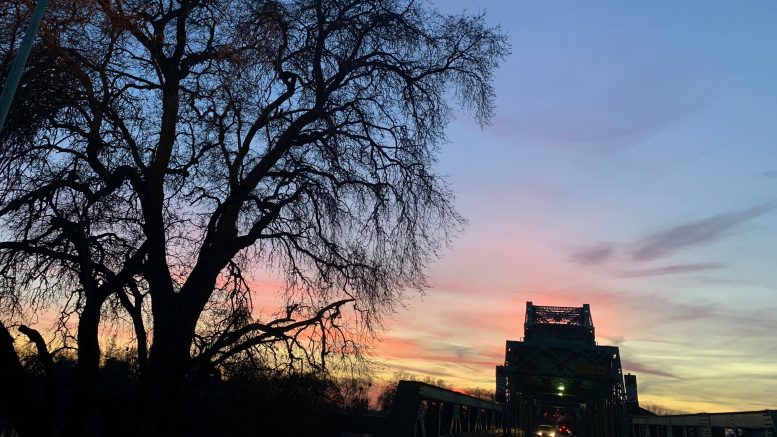 Sun falls on the town of Freeport in Sacramento County at the gateway to the North Delta. Photograph by Scott Thomas Anderson

The California Department of Water Resources, or DWR, has released the Draft Environmental Impact Report for the embattled Delta Tunnel, beginning the 90-day public comment period from July 27 to October 27 for what conservationists describe as an “environmentally destructive project.”

According to project opponents, different versions of this same gigantic and wasteful public works project — the Peripheral Canal, the Bay Delta Conservation Plan, the California Water Fix and now the single Delta Conveyance — have cast a dark, toxic shadow over California water policy since it was first decisively rejected by California voters in November 1982 as the Peripheral Canal.

While tunnel advocates claim the tunnel will protect the reliability of water transport infrastructure, address the impacts of sea level rise, and improve the Delta’s aquatic conditions, critics say the project will do none of these things, instead hastening the extinction of Sacramento River winter and spring-run Chinook salmon, the Central Valley steelhead, the Delta and longfin smelt, and the green sturgeon. It’s feared these fish species will die off as the multi-billion tunnel keeps indebting Californians for generations to come.

Those fighting the tunnel, including indigenous tribes, environmental justice advocates, anglers and Delta farmers, have also expressed little faith that the Draft EIR will address any of the questions and concerns they raised repeatedly during their work with the Stakeholder Engagement Committee for the Design Construction Authority during that two-year tunnel planning process.

The Draft EIR was prepared by DWR as the lead agency to comply with the requirements of the California Environmental Quality Act, which is supposed to involve evaluating a range of alternatives to the proposed project. The process should also include disclosing potential environmental effects, as well as associated mitigation measures, according to an announcement from DWR.

The agency claimed that “no decisions will be made” until the conclusion of the environmental review process, after consideration of public comments submitted on the draft. At that point, DWR will determine whether to approve the proposed project, an alternative or no project.

“The purpose of the proposed Delta Conveyance Project is to upgrade the aging State Water Project water transport infrastructure in the Sacramento-San Joaquin Delta,” the agency said in a statement, adding that it wanted to “minimize water supply disruption caused by an earthquake and provide operational flexibility to improve aquatic conditions in the Delta.”

“Two out of three Californians rely on the State Water Project for all or part of their water supply,” DWR Director Karla Nemeth mentioned in her own release. “Modernizing this infrastructure is essential to adapting to a future that includes more frequent extremes of drought and flood, and greater water instability.”

Additionally, Nemeth claimed, “If the project had been operational during the big storms in October and December of 2021, DWR could have captured and moved about 236,000 acre-feet of water. That is enough for about 2.5 million people for a year. If approved after completion of the environmental review process, the project will also help California manage through periods of severe drought like the one the state is experiencing now.”

Nemeth summarized DWR’s work in the last three years as attempting to “refined, redesigned and rerouted” the project under the Governor’s 2019 direction.

“We took a fresh look at everything,” she asserted. “Changing from two tunnels to one opened the door to many creative design and engineering innovations.”

In response to the draft being released, the Sierra Club said that it is “working hard to review the document and begin the process of commenting.”  The nonprofit will host a workshop in the next couple of weeks to assist Californians and answer any questions about the comment process.

The Sierra Club continues to stress that the tunnel’s construction would “significantly harm the important biodiversity of the Bay-Delta region,” and cost California taxpayers between $16-40 billion.

“Sierra Club California strongly believes this flawed project is incredibly wasteful,” said Brandon Dawson, director of the statewide club. “Climate change continues to impact the state’s hydrology, and there is no certainty as to the amount of water that will be available for the project when it’s completed. We will be closely examining the draft EIR alongside our environmental partners for new information on the anticipated impacts of the project for frontline communities, Tribes, and the vital ecosystem of the Bay-Delta.”

Dawson also noted, “We encourage the Newsom administration to fully shift the DWR’s attention to sustainable water management efforts that are environmentally beneficial and will work to build regional resilience, including conservation, efficiency, recycling, and stormwater capture.”

“This plan is so massive, it will be delivered to us on thumb-drive: A full review of this mountain of paper is simply not possible for Delta communities, environmental justice groups, or Northern California tribes in just 90-days,” Barrigan-Parrilla observed. “As we read, we will be looking for answers to the questions we raised during our work with the Stakeholder Engagement Committee … Delta communities raised concerns about water quality, salinity intrusion, pollution mitigation, and significant air pollution impacts resulting from construction and operation of the project. DWR needs to speak frankly about the sacrifices expected of the people of the Delta for this project to advance.”

Restore the Delta went on to point out that the State has only recently begun to hold workshops on salinity intrusion into the estuary, which is also part of climate change planning, and that there is “no framework for what a just transition for the Delta would entail.”.

Scientist Deirdre Des Jardins, of California Water Research, views the impact of climate change as a huge issue regarding the draft EIR for the Delta Tunnel.

“I included the NOAA 2022 estimates of probabilities of high sea level rise, which are less than 1 meter by 2100, except for scenarios with high or very high GHG emissions,” Deirdre Des Jardins explained in a recent analysis. “These could lead to warming of up to 5 degrees C by 2100. Many scientists think that level of warming would be catastrophic for the planet and human civilization. I cited the August 1, 2022 letter in the Proceedings for the National Academy of Sciences which points out that 5 degrees C of warming which calls for study of catastrophic scenarios.”

Des Jardins went on to detail that the more catastrophic scenarios would imply that the State Water Project needs to reduce its GHG emissions footprint as soon as possible.

In this reporter’s analysis, the Delta Tunnel is a project based on the illogical concept that diverting more water out of the Sacramento River and Delta estuary will somehow provide for the “coequal goals” of water supply and ecosystem restoration — being promoted during a time of increasingly dramatic impacts of climate change upon the state’s water supplies. In fact, the best available science reveals that the Delta Tunnel will in fact hasten the extinction of [several fish species]. I don’t know of any water diversion project in world or U.S. history where taking more water out of a river or estuary has restored that river or estuary. The Delta Tunnel project, if ever constructed, would be no different.

How:
Members of the public and other interested parties can submit comments on the Draft EIR in the following ways:

Will major scandal at Metropolitan Water District save Delta communities from the tunnel?