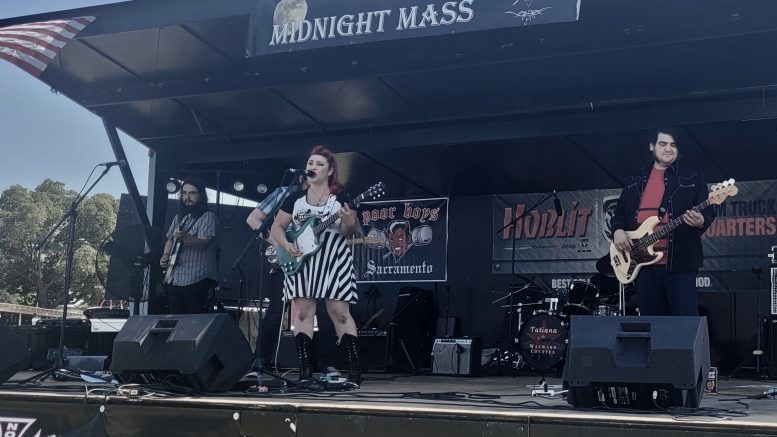 The Wayward Coyotes performing at Midnight Mass in Woodland. Photograph by Keli Rafter

The sun pummeled rows of polished cars with beaming chrome that cut into spectators’ eyes. It was the height of summer and antique auto enthusiasts were gathering for Midnight Mass at the Yolo County Fairgrounds. A flier for the event boasted 12 hours of cars, beer, food, vendors and music.

Amidst the finned cruisers, shiny hotrods and engine-revved muscle cars, the blinding sky offered no shade or quarter to those braving its heat – save for a few rail-thin lines of darkness across the grass from speaker towers hung over a stage. The musicians walking out to face the brightness with their instruments had a hard, western edge to their sound. As the grueling air grew denser, the moment was stylistically fitting. Tatiana McPhee – the fronting dynamo for Tatiana and the Wayward Coyotes – drew the four-wheel fanatics in with a joyous laugh, an easy smile and an on-point rockabilly bravado unleashed from her electric guitar.

The performance was the first time McPhee had played that style of guitar in front of an audience.

The barbed wire three-axe wall of waling that wrapped Midnight Mass that day marked one of the last performances for the Wayward Coyotes before pausing to focus on a forthcoming studio album. McPhee and her band have one more performance scheduled with Merle Jagger at The Commons Rustic Bar-B-Q in Guinda on Aug. 21.

With her hair in a pompadour, the singer-songwriter sat with her four bandmates at Bar 101 in Old Roseville to give SN&R some insight on their new collection of original songs.

McPhee hesitates to put a timeline on the project — the third release McPhee and guitarist “Dangerous” Dan Sisson have collaborated on. It’s the second released under the Wayward Coyotes name, which McPhee says came from a lifelong love of animals.

“My grandfather had wolves and coyotes and stuff like that, so I’ve always been enamored with coyotes and wolves,” she said. “My leather business is Western Coyote Leather.”

Sisson reflected on why “Wayward” makes sense at the front of the band’s name, “We’re strays,” he noted.

“This record here…we’re really going to take our time with it,” McPhee explained. “We have all the equipment at home. We did it in the studio the last couple of times, but … there was something missing all the time that doesn’t sound quite how we felt.”

Sisson carries with him the air of an experienced rocker — because after decades performing in bands like the Wayward Coyotes, that’s exactly what he is. His veteran status as a six-string bad ass gives the whole band confidence in the direction they’re taking for recording the album. Sisson says they are well-versed with the equipment they’ll be using. For him, having their own recording tools gives the group more freedom to create their own sound.

Sisson credits bassist “The” Brett Cole with acquiring a 32-channel studio sound board, an essential piece in their upcoming venture. For Cole’s part, he lucked out one day when he arrived at work at the same time as the e-waste pick up.

“I’ve had a church gig for several years: The guy doing e-waste asked if I wanted to look through it before they trash it,” Cole recalled, beaming. “It was a trailer full of studio gear from another church that updated their equipment. I’ve never loaded my truck so fast. It’s like 112 or 115 outside; I’m melting, trying to grab everything that I can.”

Sisson remembered that, though it took the strength of both he and Cole to load that abandoned equipment into their home studio, the resulting sound was truly amazing.

McPhee is excited about the Do-It-Yourself element of their next album. There are also plans for Bob “Hell Guapo” Dickson to show off his talent as a multi-instrumentalist. Dickson nickname is born of the nefarious antagonist from The Three Amigos, El Guapo. As the newest addition to the band — having joined the Wayward Coyotes in 2021 — Dickson stresses that, “I try to do something completely different than what they’re doing.”

Before joining the band, drummer Jeff Rubio had a background playing metal. For him, being a part of the Wayward Coyotes and sharing music between its members has expanded his taste, opening himself up to songs and artists he otherwise might not have explored.

“They got me into a lot of this kind of music … even before I was in the band,” Rubio acknowledged. “My wife actually worked with Tati, which is how we met. She would always come home and put it on. Dolly Parton, also. I never really listened to that. It was never anything on my radar.”

Cole and drummer Jeff Rubio have been a part of the group for two years, with McPhee and Sisson acting as its longtime backbone. They share a storied history as partners, began after McPhee became a returning member of the audience when Sisson would play in and about Roseville.

“I’m from the Bay Area originally and I moved up here when I was about 19 or so,” McPhee began, describing her first connections with Sisson. “I went to go see him play; he was the son of a lady that I worked with. They were playing and then they’re like, ‘Hey, come up and sing a few songs here.’ I always call myself the foxtail because I just foxtail my way into everything. At the time, I didn’t know how to play any instruments; Dan taught me how to play.”

Sisson said the band needed a bassist and teaching McPhee seemed like the most logical thing to do. Gathering other players in the band came easy over time. After running into McPhee and Sisson at shows, Cole said that Sisson sought him out to play with the Wayward Coyotes.

“He saw me lifting up heavy blocks and thought, ‘He could be a bass player,’” Cole joked. “One day, there’s just a thing on Facebook … looking for a bass player. I think the first thought was that I was pretty busy; maybe I could just be like a backup plan. We just really gelled and got along. They live close. We get to have fun with this band.”

Once Wayward Coyotes begin recording the new album, McPhee is hoping to collaborate with Jaedra Burgess, her partner in the duo Moonlit Mustangs. Harmony is not something that’s been utilized yet in the Coyotes’ sound. The band will also be working with JonEmery Dodds who featured McPhee on his album, Americana. Sisson, too, has played with Dodds for years.

“It’s magic,” Dodds exclaimed. “I love being on stage; I’m on stage all the time, but when I’m on stage with Tatiana, and Dan? Because we’ve spent so much time together, it’s just like a homecoming. It’s because we just have so much fun. We get each other’s quirks and idiosyncrasies, and we play off each other really well.”

Dodds said that, when he plays with Sisson and McPhee, it’s obvious to him that the three of them are in their element, doing what they’re meant to do. He said that when the two are joined by Cole, Dickson and Rubio, they’re nothing less than a force.

“Obviously her voice is really awesome, and she’s got that really killer look,” Dodds noted. “Her songwriting is really what carries all of that together…and Dad is an amazing player. To see what they do together, especially with the current lineup of the band, is just a lot of fun to watch.”

McPhee confessed to enjoying the banter that goes on between she and the guys.

“We’re all buds,” she said, adding that the members of the band were friends of she and Sisson before joining.

Be the first to comment on "Rockabilly rage before midnight: Tatiana and the Wayward Coyotes bring a set hotter than summer  "