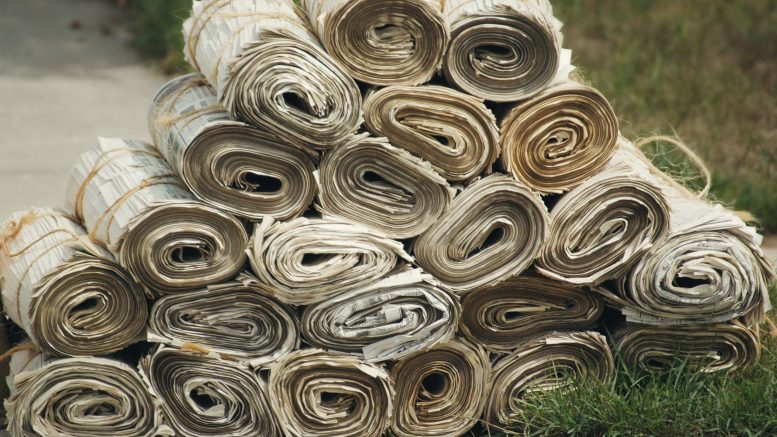 The Washington Post has the most memorable and consequential motto in journalism: “Democracy dies in darkness.” Adopted in 2017, the point is obvious. For a democracy to survive, the glare of highly visible, public-interested journalism is essential.

So what should one make of the Sacramento Bee’s decision last week to de-emphasize election coverage on its home page 100 days before the Nov. 8 election? The change came Wednesday with the dropping of the “Elections” link from the top navigation bar of SacBee.com and replaced by an “Obituaries” link.

The change comes as the quantity and quality of Bee political coverage of competitive local races has been far from robust. An online review of the paper’s reporting shows just 10 election stories published in July. That’s startling low for the daily newspaper serving the highly politically active capital of the nation’s largest state.

But further review of those 10 shows two were about Gov. Gavin Newsom’s recent Florida ad buys unrelated to his re-election. A third piece essentially corrected a June story in which the Bee wrongly and prematurely concluded the June primaries had generated a record-low midterm turnout. However once all votes were counted the exact opposite proved true: more midterm votes were cast by Californians in 2022 than in any midterm ever.

But these coverage issues aside, by removing the elections link, the Bee chose to give less visibility to its election coverage in a town dominated by elections and the elections business. Readers can still find an elections link within the “Politics” section, but the demotion makes it that much harder for readers to research their election choices ahead of their mail-in ballots arriving in two months.

Conspicuous by absence has been any recent Bee coverage of three open state assembly and senate seats in the Sacramento area. The Bee has also ignored intriguing potential generational, gender and Progressive changes on the Sacramento City Council. Likewise, it has yet to spotlight the runoff race for the fifth of five Sacramento County supervisor seats that will effectively decide control on a board otherwise split between two conservatives and two liberals.

But by far the most expensive, competitive and potentially consequential local race is the Congressional battle between GOP Assemblyman Kevin Kiley and Democratic moderate Dr. Kermit Jones. This is for California’s third Congressional seat that sprawls across 10 counties but centers on the large, growing Sacramento suburbs of Folsom and Roseville. This race will help determine which party controls the U.S. House of Representatives next year. In 2020, Donald Trump would have won the reconfigured district by just 1.9%, and the race has already attracted $3 million in donations.

Normally, media outlets salivate to cover such high-stakes, competitive House races. But the Bee has yet to cover it in any great depth, including no coverage of some very damaging questions surrounding one of the runoff candidates. (More on this below.)

Sacramento Bee’s Executive Editor Colleen McCain Nelson and Managing Editor Scott Lebar were both contacted by phone and email for comment about the website change and their election coverage, but neither responded.

This lack of response is not unusual for the Bee, but it’s especially notable given how loudly the paper recently denounced local Republican candidates who rebuffed endorsement interviews requests from the Editorial Board ahead of the June primary. This featuring not one, but three published stories lambasting these candidates for refusing to take questions from its opinion staff. Although some candidates cited the Bee Editorial Board’s penchant for sophomoric name calling, the Bee’s published responses instantly confirmed this by taunting the no-shows as “cowardly,” “afraid” and “snowflake.”

It’s likely the Bee sees no double standard here and believes political candidates seeking positions of public trust have a greater duty to respond to public scrutiny than itself. However media outlets also deal in public trust. Media outlets that transparently answer natural questions about their own practices help uplift their reputation and journalistic mission by demonstrating no one is above public scrutiny.

The web site change that de-emphasizes Bee electoral coverage is also notable given the recent history of McCain Nelson. She became Bee executive editor and California regional editor for the McClatchy newspaper chain in January 2021. Before that she served as McClatchy’s national opinion editor. In that role in 2020, she instituted a corporate-wide policy among McClatchy’s 30 newspapers that prohibited any of them from making a presidential endorsement if the paper had not interviewed both Joe Biden and Donald Trump.

The decision was paradoxical on multiple levels. In The New York Times. piece on the policy change, it noted Trump was “not in the habit of talking to local newspaper editorial boards.” This was largely because Trump had reason to expect few editorial boards would endorse him, so why bother. So McCain Nelson’s policy curiously gave final control to Trump over whether any McClatchy paper could chose to endorse his opponent. A very strange tail-wag-the-dog policy to be sure.

In addition, by McClatchy’s “national opinion editor” effectively saying no McClatchy newspaper should offer an opinion on one of the most significant national events of 2020, this suggested little need for her position.

McCain Nelson explained in her memo to McClatchy editors: “Most readers aren’t turning to us for national political commentary, and they can choose among dozens of news organizations that deploy journalists to cover the presidential campaign full-time. If we’re simply observing the race from afar, our ability to provide unique content and our own reporting is severely limited.”

But this argument seemed fairly circular and self-fulfilling. By definition, any quality localizing of presidential campaign issues would create “unique content.” This in turn allows the paper – and its local readers – to be less distant “observers” of D.C. events. Thus McCain Nelson’s policy only denied an important local journalistic perspective to McClatchy readers – some of whom may even value a local media perspective more than a distant national one.

After all, who better to analyze for readers the comparable local benefits of the competing presidential platforms than their local daily newspaper? In California, this would include assessing the implications of candidate proposals on national infrastructure funding, lowering crime, fighting inflation, lessening local climate change and wildfires, addressing Central Valley water issues, and reducing the chance of sending local men and women to war.

But many critics of McCain Nelson’s endorsement change believed it was governed less by any real journalistic tenets than the corporate bottom line. By reducing McClatchy newspaper involvement in national politics, it lessened the chance of subscription cancelations by that portion of its conservative readership that might be offended by any endorsement against Trump – no matter how well reasoned or civilly presented.

Kiley Gets Pass (So Far)

In her memo, McCain Nelson also mentioned the need for McClatchy papers to be relentlessly “local, local, local” in its news coverage. But over the last ten years, consistently scrutinizing local candidates and elected officials has become less and less common at the Bee. As this publication has regularly pointed out, a long list of political issues exists that the Bee has either refused to cover or covered extremely superficially. This has ranged from ignoring a local 2018 GOP-endorsed candidate with extremist ties who had raised $300,000 in unreported dark money to refusing to cover Sacramento’s two Democratic members of Congress who together have raised hundreds of thousands of dollars from the opioid industry even as Sacramento County is engaged in lawsuits against those same donors.

Now add to this list the Bee’s shallow coverage to date of the Kiley-Jones CA-3 House race. This includes ignoring Kiley’s “extremist associations” as regularly charged by Dr. Jones – an issue especially relevant in light of the Jan. 6, 2021 insurrection and Trump’s endorsement of Kiley.

It should be noted the Bee’s silence on Kiley’s radical associations is not due to these being the ginned-up product of a political spin-meister or conspiracy theorists. Last year, this publication exclusively broke its eye-witness account of Kiley serving as a featured speaker at a March 2021 rally co-organized by an extremist known to have called for Americans to arm for civil war. Kiley also shared the stage with other speakers with known QAnon, militia and national hate group ties.

SactoPolitico.com knows a Bee reporter did at least temporarily look into the issue prior to the June primary, but nothing was published then or since. This silence is notable given that when candidates and elected officials elsewhere in the country meet with or speak at events organized by radical figures, it is major news. See Idaho’s Lt. Gov. Janice McGeachin, recent Texas state legislative candidates, or even Barack Obama back in 2008 when he was widely and fairly scrutinized for contacts with a convicted former domestic terrorist. That’s because accepting such invitations raises fair questions about a candidate’s decision-making, and voters deserve for candidates to be at least pressed to respond – be it with an explanation or mea culpa.

But the Bee appears to believe its readers do not need to know such information. Not during this Congressional primaries, and not last year when Kiley ran as a gubernatorial replacement candidate in the attempted 2021 recall of Gov. Gavin Newsom. In many ways, this seems a ripe recipe for local democracy “to die in darkness.”

From a review of other McClatchy-owned newspapers, the Bee’s navigation-bar change appears related to a separate corporate edict. As of last week, all McClatchy newspaper websites that previously did not feature a navigation link to its obituaries section now do.

The did not previously feature this link, but since it has a crowded navigation bar, it needed to drop at least one link to add the obituaries link. But dropping the elections link was not its only option. The Bee’s navigation bar has a number of overlapping topics. For instance, the links to “Personal Finance” and the “Homebuyers Guide” would seem natural for combining. (Oddly the headline of the current lead Personal Finance story is not very personal-finance related: “When is the California wildfire season in 2022?”) Another option would be to temporarily combine two links until the Nov. 8 election concludes, and then drop the Elections link until the next primary season.

Were these other options considered by Bee management? Or is election coverage now so de-emphasized at the Bee that dropping some other link was never even considered? Either way, the final decision looks bad for journalistic principles, bad for Bee readers, and bad business in a politics-hungry town.

Of course, Sacramento Bee management may have a different view of all this, but so far, they look as reluctant to answer questions as those Republicans who stiff-armed their Editorial Board.