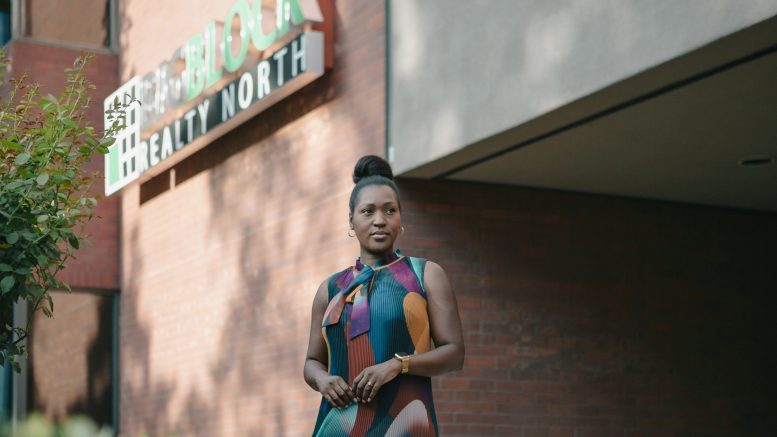 Local real estate industry works to increase the Black homeownership rate, which remains the lowest among all demographics

Three years ago, Elizabeth Peters, a single mother of one, went on a 10-month journey to find a house to buy in Sacramento.

The journey was discouraging, says Peters, now 33-years-old, because many investors were outbidding her on properties until her real estate agent found a program through NeighborWorks Sacramento that offered down payment assistance. The program helped Peters purchase a home that was a good fit for her and her son, and she closed on the house in mid-March of 2020.

“Then I had a crazy life event happen,” Peters says.

Peters bought her house on March 13, 2020 — and her mom underwent emergency surgery the same day. Peters was caregiving for her mother after she was released from the hospital, so she wasn’t able to move into her home until June.

Earlier that year, her sister had been diagnosed with stage 4 cervical cancer. In October 2020, her sister died, leaving behind her children. Peters now takes care of her nephews, and she had to sell her house because she needed a bigger one to accommodate her larger family. That meant breaking the NeighborWorks contract, which provides $20,000 toward a down payment and closing costs; but the person has to live in the house for five years for the loan to be forgiven.

Although she had to break a contract, Peters says she was grateful to find a bigger house in a better neighborhood, with the help of her agent Sydni Chattman, and she’s happy with the resolution.

But there are concerted efforts to help bridge this gap. In 2018, the National Association of Real-Estate Brokers launched an initiative to increase Black homeownership called 2Mn5 — that refers to getting an additional two million Black homeowners in five years to help Black Americans gain economic security through homeownership, activism, advocacy, education and community outreach. NAREB’s local work is through the Sacramento Realtist Association.

Keisha Mathews, the broker and owner of Mathews & Co. Realty Group, and a member of the Sacramento Realtist Association, has been working in real estate for 18 years. Mathews is also a radio host with a show on 97.5FM KDEE called “Selling Sacramento,” where she brings awareness to the African American community about homeownership opportunities.

With the numbers being as low as they are in Sacramento, there are many ways that real estate agents are trying to increase Black homeownership in Sacramento. These agents have been focused on working alongside homebuyers to help find down payment assistance loans, how to access credit and learn about the market.

Mathews says she brings on guests that help demystify some of the challenges, stereotypes or misconceptions people might have about the homebuying process. One of the ways to increase Black homeownership is to make sure there is an increase in representation in the real estate field, Mathews says. Improving representation doesn’t just mean more Black agents, but also the number of Black brokers, appraisers, inspectors, and title and escrow agents needs to increase.

Ryan Lundquist, from the Sacramento-based Lundquist Appraisal Company, says a huge challenge for all first-time homebuyers is Sacramento has been high price growth. “It’s really expensive to buy a property right now,” he says. “So I think that affordability is a barrier. In Sacramento County, according to the California Association of Realtors, about 34% of households can afford the median price.”

Those numbers are based on last quarter, according to Lundquist, and “this number keeps going lower and lower, where there’s fewer people that can play the market.” Increasing inflation and high mortgage rates are also contributing to the challenge for potential buyers.

Chattman, who helped Peters get into a home, has been a licensed Realtor for seven years and works for Big Block Realty North in Sacramento. Chattman says one of the ways she is helping to increase Black homeownership is through education.

“I am constantly sharing information, creative ways to get into homeownership; just last week, or the week before, I shared about a program called NACA, which is the Neighborhood Assistance Corporation of America, a nonprofit … with funding upwards of about $10 billion,” Chattman says. Founded in 1988, NACA is the largest housing services organization in the country, with more than 30 offices nationwide, including an office in Sacramento.

“There is no downpayment, no closing costs, no fees, and also your interest rate is going to be below market,” Chattman says. “So that’s one of the good things about the program is that you don-t have to pay anything out of pocket for the purchase of your home.”

Peters, as a first-time homebuyer, says her advice for people who may be reluctant to own a home is to research programs that offer financial assistance, like NACA or NeighborWorks. “People think they have to have this huge amount of money to buy a house. [That’s] not necessarily true,” she says.

Another first-time homebuyer that Chattman has helped is Melissa Muganzo Murphy. Murphy became a homeowner in August 2020 at the age of 32 and has a newly built three-bedroom, two-and-a-half bathroom home in Rancho Cordova with a garage and a patio. She is the first in her immediate family to own a home.

Murphy, who is Black, met Chattman in 2017 and told her that she and her wife were looking to purchase a home and would love to have Chattman as an agent.

“I grew up in an apartment,” Murphy says. “I grew up as a renter. My mom grew up in a single home, she always rented. So the idea of owning a home was actually really overwhelming. I thought that I was too young or not the right fit. I also thought that home ownership was very much a white person’s game.”

Murphy’s advice for potential new homeowners is that everybody should try to own their own home because homeownership is a long-term investment, rather than losing money on rent. And while the process of getting a new home was initially overwhelming for the couple because they experienced “imposter syndrome” about owning a house, Murphy says, over time they realized they could handle it.

“Is it going to be more expensive than an apartment? Can we handle the maintenance? And then we’ve heard all these horror stories too, about homeownership,” Murphy says. “So we were just so overwhelmed and nervous. And then Sydni was like, ‘You can actually do this. And here’s how you do it.’”