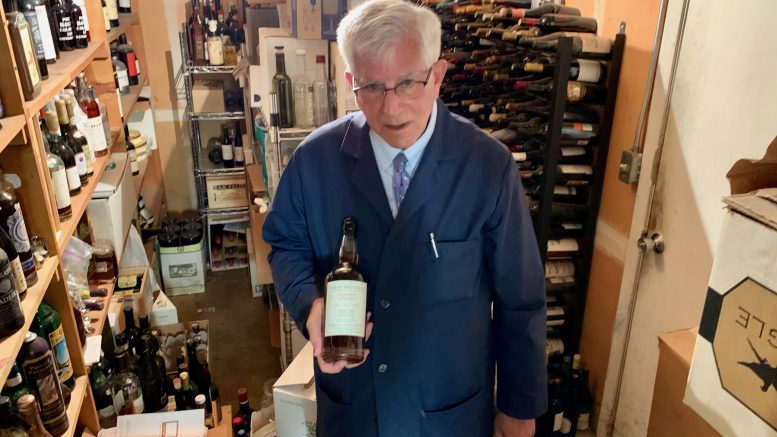 Darrell Corti moves through his hidden vault of spirits in the back of Corti Brothers. Photo by Scott Thomas Anderson.

If there’s any doubt about Darrell Corti’s legendary tasting palate – or his uncanny instincts for the direction of wine and spirits – it was probably removed by Whisky Auctioneer’s latest international bidding war: Two bourbon bottles this grocery wizard produced with Julian Van Winkle III exclusively for the Corti Brothers in Sacramento, decades ago, just sold for a whopping $24,700 each.

Both vintages came from a private collection, meaning Corti himself doesn’t get anything from the exchanges but further affirmation of his predictive powers about the western culinary scene.

Lately, the size of that influence seems to be getting recognized more and more from Berkeley to Scotland.

The O.G. of greatness in a glass

The bar at Churchill Downs, home to the Kentucky Derby, still has three bottles of Corti Brothers Van Winkle Family Reserve resting on its shelves. One of those whiskey bottles maintains its original price tag – $29.95. It’s not clear exactly when these selections first hit Churchhill Downs’ watering hole, but it is a good bet that, when they did, Corti was already influencing which bottles were getting slid into the most-cerebral wine cellars and liquor cabinets in the U.S.

Corti was raised in the classic Italian market and delicatessen that his father, Frank, and uncle, Gino, brought to the Capital City in 1947. Handling the store’s imports, Corti began to work with artisan winemakers and distillers on both continents. Those relationships took on momentum over time. Corti’s fingerprints on the development of California cuisine, what eventually and expansively became known as the nation’s farm-to-fork movement, is by now well-documented.

He was friends with the late West Sacramento winemaker Charles Myers, who started bottling Mission wine from century-old vines in Plymouth’s Shenandoah Valley in 1968: He and Corti eventually sold Sutter Home on the idea of buying grapes from that area, opening up the investment that ultimately propelled Amador to one of the state’s most cutting-edge wine regions. Not long after, Corti suggested to a young, pathfinding farmer named Dick Cooper, and his father, that they start planting an obscure northern Italian grape called Barbera on their rolling ranch in the Shenandoah. Cooper then brought his own agricultural know-how and marketing magic to that varietal, and – along with the efforts of two other wineries that had planted the grape before Cooper – Amador County became recognized as the best appellation in the world for making Barbera wine. Corti was also an early supporter and culinary collaborator of foundational California chef Jeremiah Tower, as well as mentor on food-sourcing to Alice Waters and her team at the game-changing restaurant Chez Panisse.

If all Corti had done was cast his Prospero-like powers on the headwinds of where wine and food pairings were going, that would have been enough to make him whispered about across California and beyond. But in 1976, Corti also decided to get involved in the nation’s whiskey landscape. He wanted Corti Brothers to put out its own brand of brown spirit that would commemorate the Bicentennial of the U.S.

“I bought a very special bourbon that I was lucky enough to find,” Corti recalled. “And that’s how I got involved in selling bourbon.”

Two years later, Corti had his own of scotches branded for the first time, working directly with Avery.

“In 1978, Avery still had a bottling line and we could buy very interesting but relatively inexpensive scotches from them,” he explained. “The youngest one we got was an 8-year-old McCallan … “The one that I liked the best that we bought was a 10-year-old Highland Park that was a clear whisky. It was actually pale in color. It looked like white wine. And it was absolutely delicious.”

Soon, Corti was partnering with R.W. Duthie, the shipping mark for Springbank Distillery on the Kintyre Peninsula of western Scotland, to make more scotches for his family’s market.

The team at Whiskey Auctioneer asserts that Corti was the first American to ever brand and market a single malt Scotch using his own label.

Eventually, Corti began working on some exclusive whiskeys with Julian Van Winkle III, who hails from one of the most groundbreaking distilling families on the Kentucky bourbon trail. When Corti and Van Winkle teamed up, the later was still in the earlier phase of his career. More recently, Julian III has become celebrated for his joint ventures with Buffalo Trace Distillery.

Corti and Van Winkle met through a mutual friend, a retailer in Covington, Ohio, who worked across the river from Kentucky.

“One of the first whiskeys we bought were labeled Van Winkle Family Reserved,” Corti remembered of his collaboration, adding that this bourbon was put in French Cognac bottles he procured through his wine contacts in California.

The finished product landed on the shelves of Corti Brothers.

California’s guru of taste was proud of the bourbon, though stresses that sales at the time didn’t indicate what would later happen at Whiskey Auctioneer’s event.

“They were extremely good whiskeys, but they weren’t expensive,” Corti explained. “Back when we had them, they weren’t a product that just disappeared off the shelves immediately. But now, there’s an extraordinary demand.”

It was two bottles of Corti Brothers Van Winkle Family Reserve that were featured on Whisky Auctioneer’s big virtual sell-off between May 13 and 23. Though the organization is based in Perth, Scotland, this international event was focused mainly on American bourbons.

“One of the key things that we identified within it was this idea of private label bourbons and single-barrel selections, so we’ve kind of tried to plot the journey of American whiskey as a category using these landmarks,” Joe Wilson, Head Auctioneer, said just days before the action began. “We’re kind of starting in the mid-20th century with exclusive selections produced by Maker’s Mark and Stitzel-Weller, in the 1950s, through to the emergence of the first private labels in the 70s and 80s; and then kind of rounding at the end, where we have the modern single-barrel programs. We’re looking at that whole evolution of every category up to this point.”

Beyond that, Wilson stressed that Whiskey Auctioneer was proud to have Corti’s bottles as part of last month’s event because his reputation proceeds him, including in the United Kingdom.

“We’ve always been aware of him, primarily through the bottles he did with R.W. Duthie,” Wilson noted. “Those are incredibly rare, and they come through the auction now and again. And, as we’ve gotten more interested in the bourbon – and as you delve into the history of important brands, particularly with the Van Winkles – you discover that Corti is an incredible figure. His palate is renowned, and his knowledge of everything from wine to spirits – Scotch whiskys and American whiskeys – is incredible. So, it’s no surprise to us that his selection from the Van Winkle range has become the most sought-after bourbon in the world.”

Wilson added, “We’re using the Corti Brothers bottle as sort of the headline bottle: Corti kind of pioneered this approach where he was involved in the selection process, and wanted to try the whiskeys, yet he also wanted them the same way they were represented. So, he is this historical figure, particularly in the story we’re trying to convey in this auction.”

Corti, who still arrives at the Sacramento market virtually every morning wearing his blue grocer’s coat, certainly does not speak about himself in those terms. When Corti thinks back on how much work initially went in to selling his Van Winkle Family Reserve, even reducing the price at one point to move more bottles – and now sees how much those same vintages can net from collectors – he just shifts into a relaxed but contemplative tone.

“It’s incredible to me that people want them at that price,” Corti acknowledged. “I, unfortunately, didn’t keep any of these bottles, so it’s a bit of a shock to me. On the other hand, I guess nothing surprises me.”

Scott Thomas Anderson is also the host of the ‘Drinkers with Writing Problems’ podcast, Episode 6 of which is about American whiskeys and bourbons.

Be the first to comment on "The original influencer: Darrell Corti’s early whiskeys for Sacramento hit it big on the world-wide market"