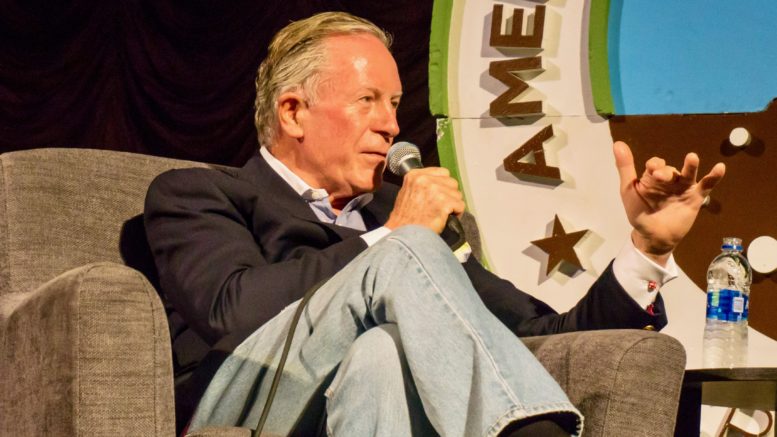 Chef Jeremiah Tower remembers the past at the Crest Theatre.

Sapphire and pomegranate gem lights burn across the gilded waves of the Crest Theatre. A large, eager crowd is spilling into the seats. And then he walks onto the stage, the man who turned sweat-dappled chefs into American cynosures; who proved growers were artisans and stove-tops were easels; whose kitchen alchemy made one restaurant famous, and whose magnetism filled another with power-brokers, film legends and rampaging yuppies.

A man without a country, Jeremiah Tower somehow created a mythos.

But it was almost forgotten. From the sunny shores of self-exile, Tower watched as his cooking achievements in Berkeley helped turn Alice Waters into an iconoclast. He saw how his obsession with marrying food experience to a theatrical persona in San Francisco birthed the concept of a celebrity chef. Tower walked away from all of it while others made fortunes, but now he’s reluctantly back on the pop culture radar. And tonight, standing on the stage of the Crest, he’s still making that comeback. Yet in a mad dash of public appearances, there is something different about this particular evening. Tonight, Tower is standing on a stage in a city that’s been desperately trying to press its reputation into his own culinary DNA, like some mouthy bastard demanding a paternity test. Tonight, Tower is standing in Sacramento, the self-appointed “Farm-to-Fork Capital of the Nation.”

Facing a nearly sold-out crowd, Tower openly embraces the linage. Asked why he agreed to lead the upcoming dinner on the city’s Tower Bridge, the chef muses with a smile, “Well, how could I say no? When I started at Chez Panisse in 1972, people were embarrassed to live in Sacramento.” Laughter erupts in the theater. Tower quickly adds, “But, quite frankly, the revolution that was started in 1972 has continued, and this is the epicenter now. Nobody else can claim that.”

From there, Tower starts turning the charm burner onto its highest setting. He lands joke after joke as the audience prepares to watch the documentary about his life, The Last Magnificent. The mood will sober once the screen lights up. Melancholy, half-surreal, the film tells the Icarus-like story of Tower’s rise to prominence at Chez Panisse, followed by the society page luster he shined with after opening Stars in Union Square, and ending with his public feuds, financial turmoil and evaporation from the narrative of who invented “California cuisine.” Directed by Lydia Tenaglia and produced by Anthony Bourdain, The Last Magnificent is a seesaw yarn about endless ambition, quietly sprinkled with deep meditations on originality and death.

While the film digs hard at Tower’s psyche, it’s the chef’s own memoir — published in 2003 as California Dish and re-issued last year as Start the Fire — ­­­where details emerge of how he actually steered American dining away from commercial food trucks and into the realm of first-rate, locally-sourced ingredients, which in turn are fired and plated with a clean, rustic elegance. Tower’s own recollections of that time range from forging across every outdoor market in the Bay in a Dodge Dart that couldn’t climb the hills, to baffling Oakland’s Sicilian butchers by thrusting his arms into buckets of blood as he grabbed at just-cut calve livers.

Tower’s book also reveals he’s no stranger to the capital region. In 1980, he was the chef for a party at an old Delta mansion along the Sacramento River. That night, Tower wowed the Dean of the California Culinary Academy with a spread of soaked and poached ham, grilled Delta sturgeon, duck with kumquats and pear tarte tatin, all paired with rare champagnes and Hungarian sweet wines. The recherché vino selection was brought to the party by Darrell Corti, whose family has owned Corti Brothers Emporium in East Sacramento for 71 years. These days, Corti’s considered a near-savant of wine, cheeses and exotic cooking ingredients. Having maintained his connection to Tower for decades, Corti looks on from his theater seat as the star of the evening gives him a shout-out.

“We’ve been friends for a long time, but it started because he used to be a customer,” Corti reflects. “I think a night like this is really good for people. They seem to like the film, and that’s what great films are supposed to do.”

But Corti is not Tower’s only longtime link to the Sacramento area. Sitting in another row of the Crest is Jerry Budrick, one of Tower’s original business partners at Chez Panisse. Budrick agrees with the premise of The Last Magnificent, specifically that Tower’s culinary innovations aren’t fully recognized.

“It’s amazing how his story just got lost in the swirl of time,” Budrick says. “His food was incredibly better than anything anyone in the Bay Area ever had up to that point.”

Asked about Tower’s reputation for being difficult, Budrick smiles and shares a war story: It involves the day Tower was bit by a live clam while doing kitchen prep at Chez Panisse. Budrick soon began to worry his chef was suffering from a nasty bacterial infection spreading through his arm. He says Tower wouldn’t get medical attention. He was trying to soldier through the pain. Eventually, Budrick strolled into the restaurant’s dining room where a prominent Berkeley doctor — the father of actress Kelly McGillis — was enjoying one of Tower’s dishes. As Budrick tells it, against his chef’s stubborn protests, he arraigned a discrete check-up inside the wine room.

“The doctor told Jeremiah, ’Another day and that could have killed you,’” Budrick recalls.

As for one of the central conflicts of The Last Magnificent, the question of whether California Cuisine was invented by Tower or Alice Waters, Budrick had a front row seat for the contributions each made. He says there’s no way to ignore Tower’s influence, which Budrick thinks is connected to the chef’s elusive childhood. Bourdain’s film portrays Tower’s earliest memories with a veneer of Wes Anderson’s The Grand Budapest Hotel — if the script had been written by Stephen King. Told through numbing clips and flashbacks, Tower recalls being virtually abandoned by his wealthy parents, often left wandering through the kitchens and dining rooms of luxury hotels and cruise-liners as the family hauled him around the world. But Budrick believes that, if those times were lonely for Tower, they also gave him a vision that changed American cooking.

“The thing you have to understand about California cuisine is that it’s got to have that classical touch to it that Jeremiah brought,” Budrick explains. “It’s kind of like music, where there are performers who were classically trained but then went into rock and ’n’ roll … It’s a combination of the fresh, bright-colored beautiful things picked that day, but with the knowledge of how great dishes look — that eye that Jeremiah has. And it comes from his upbringing on those fancy ships and hotels, where they had true chefs working.”

With seconds to go before the documentary plays, and with a host of chefs and film buffs waiting to line up for selfies with Tower, the resurrected personality offers a last piece of advice on how to keep the local Farm-to-Fork movement genuine. For him, it’s still all about the region’s fledgling outdoor markets.

“All the young chefs in the United States should remember to keep it simple,” Tower says. “Because the great chefs are the ones who know how to find the perfect ingredients, keep them the centerpiece of the cooking, and make them look like they’re supposed to look. … You make menus from your voyages through the markets, and that’s the best voyage you can ever take.”

Be the first to comment on "Flame Dreams: Jeremiah Tower remains a California enigma"