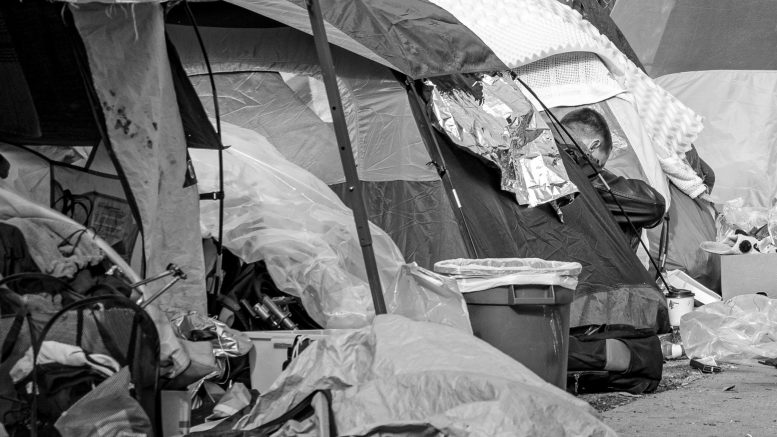 California legislators recently proposed a $50 million piece of legislation that would mitigate the environmental impact of illegal campsites on Sacramento’s parks, riverways and wildlife habitat.

But a number of advocacy groups oppose the bill, calling it over-broad and inhumane.

Local officials say that the sprawling tent cities in the American River Parkway have become a clear and present danger to life, land and animals.

AB 2633 is largely designed to reduce the number of fires threatening the American River Parkway.

“There were at least 60 fires along the parkway last year, one of them even damaged a restoration project near Bushy Lake” stressed Stephen Green, president of Save the American River Association, or SARA.

The National Weather Service recently issued the earliest red flag warning ever recorded for California’s springtime. Due to the unseasonably dry months the state has been experiencing, high winds and dry weather puts the parkway at an even greater risk of catching flame.

Climate Change Chair for the Environmental Council of Sacramento Ralph Propper says that “it’s the most important environmental area in Sacramento and the county has not done much for it.”

Allowing the parkway to be an epicenter for illegal camping has also raised other concerns among many Sacramantans. Crumbling tents, piles of garbage and human waste have become common sights along its 23-mile pedestrian trail. More and more people have been camping out along the river, but lawmakers have seen the issue take on a broader political dimension since a 20-year-old Rancho Cordova woman was brutally murdered by a man living outdoors.

Yet advocacy groups that include Housing California, the Western Center on Law and Poverty, Human Rights Watch and the ACLU all argue that AB2633 is not the answer.

“While we recognize the need to protect and preserve the public lands and ecosystems of California’s parks, we are gravely concerned that AB 2633 will further displace, criminalize, and violate the rights of unhoused Californians while failing to address the underlying driver of homelessness: the lack of affordable and accessible housing to Californians with the lowest incomes,” the groups wrote in a joint letter to

Sacramento Steps Forward conducts a Point in Time homeless count every two years. The 2019 count resulted with about 5,570 people experiencing homelessness, this being a 19% increase from the 2017 count. But, by other metrics, the number for Sacramento County is estimated to be twice that high.

“In simple terms, the population has grown, and we are struggling to find somewhere to put these people,” said Sacramento County Department of Human Assistance Public Information Officer Janna Haynes.

The 2022 Point in Time count is currently being conducted and the number of people living outside is expected to have doubled since 2019 even by that highly limited method of tracking it. Sacramento County has also provided an updated 2022 fire risk reduction schedule on the regional parks webpage.

Sacramento recently declared the situation a crisis and is currently building a “Stay Safe Community” near Florin Road east of U.S. Highway 99. The shelter will house around 100 people in need, this will provide a place for them to sleep, get fed and get assistance.

“There have been so many proposals and we are always up against a battle in finding places to build shelters,” Haynes acknowledged. “Many of these folks need more than just a place to sleep, they need stability, rehabilitation.”.

Be the first to comment on "With Sacramento’s homeless crisis burgeoning, controversial new multi-million dollar bill is targeted for the American River Parkway   "