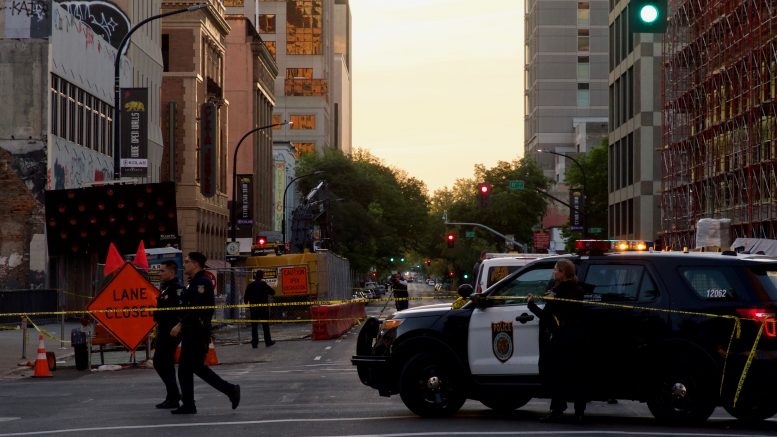 At least six people are dead, 12 hospitalized, as detectives search for answers

Fred Harris woke up just after 2 a.m. to his phone exploding.

The first person to get through was his daughter.

Rousing, Harris began to piece together that some kind of mass-causality event had happened Downtown just minutes before. People were claiming they’d seen his 38-year-old son, Sergio, go down in the torrent of bullets.

Harris says he can’t ever remember leaving his house that early before; but he pulled some clothes on and quickly headed to the heart of the city, determine to get to the truth. He arrived near the intersection of K and 10th sometime around 3:30 a.m. That was before police on the graveyard shift had called in their full cavalry and started setting up a perimeter that would run for blocks.

Approaching the chaos, Harris noticed Sergio’s car parked along the street. He knew that wasn’t a good sign. Sergio would never just leave his car.

The crime scene was tight at that point. Bystanders could get up close. Hoping to glimpse whether one of the six victims splayed out on the ground was his son, Harris noticed a large man making his way to the tape. He says the other man was in disbelief and extreme distress. He started calling out to his daughter’s lifeless body. Harris remembers the man yelling at her to get up – pleading for her to realize she wasn’t dead.

“There was only a couple of officers there, and it looked like they didn’t know what he was about to do,” Harris muttered. “For a minute, it looked like he might just cross the tape and pick her up. After that, some sergeant said, ‘Hey, don’t let him see her.’ They moved the yellow tape back a lot after that.”

Harris acknowledged keeping his own composure, though didn’t explain how. His niece Deserae was soon there and said she thought her uncle was in some strange kind of shock.

By that time, at least three videos of the mass-shooting had started circulating on various Sacramento Facebook accounts. One shows two men physically fighting in front a night club, apparently in the area of K and 10th, escalating to one man choking another before a rapid-fire eruption of bullets begins tearing through the night. Another video, taken from an upper vantage point that may have been a window or balcony, shows the pandemonium of people running, while the owner of the phone begins counting bodies on the ground. In a third video, law enforcement can be seen desperately performing CPR on multiple victims who are down.

Police have not yet announced which club was involved, though Harris’ family believes it was The London. That club later made a post on social media implying it had not.

Deserae said that Sergio had been enjoying a night in Midtown earlier, starting his evening at Blue Cue, and at some point, he’d headed to the Downtown entertainment district with his cousin. Sergio’s cousin appeared shaken to his core later at the crime scene.

Throughout the morning, family and friends of potential victims drifted up to the tape, many with tears in their eyes, trying to get confirmation of their worst fears. The bodies couldn’t really be seen from any of those positions, though detectives had to keep the departed on the ground where they fell for hours.

Police have confirmed that shooting happened around 2 a.m.\

At 9:42 a.m., a white Sacramento County Coroner’s van finally arrived for the dead, rolling down L Street and turning into the perimeter at 10th Street – right in front of Harris.

“I don’t know, they’re saying they took my son out in that van,” the father later mentioned.

At 11 a.m., Mayor Darrel Steinberg and the Sacramento City Council gathered with reporters just across the street from the State Capitol.

“This morning our city has a broken heart,” Steinberg said. “Thoughts and prayers are of course appropriate for the victims, the families and those who are now fighting for their lives in the hospital right now. But thoughts and prayers are not enough … How long before we really face the sickness in the country?”

The mayor also acknowledged, “People are understandably worried, and this has already been a difficult time for Downtown Sacramento.”

Next, Katie Valenzuela, the councilwoman for Downtown, stepped to the microphones. Just 15 months into the job, it was the third time Valenzuela had to face the cameras over extreme violence in the community she represents. And this was by far the worst casualty count yet – one of the worst for the city in decades.

Valenzuela removed her sunglasses and stood silently for a spell as the tears gradually overtook her. She’d barely had any sleep as she took deep breaths as councilwoman Angelique Ashby stepped in to put a hand on her shoulder. “I am heartbroken and outraged,” Valenzuela managed.

Multiple shooters were involved. So far, police have arrested brothers Dandrea and Smiley Martin, along with a man named Daviyonne Dawson. At least one gun has been recovered from the scene.

This story will be updated as more information is known.

Be the first to comment on "UPDATE: Sacramento’s worst sunrise: Pre-dawn scenes from a nightmare that left 18 people shot"