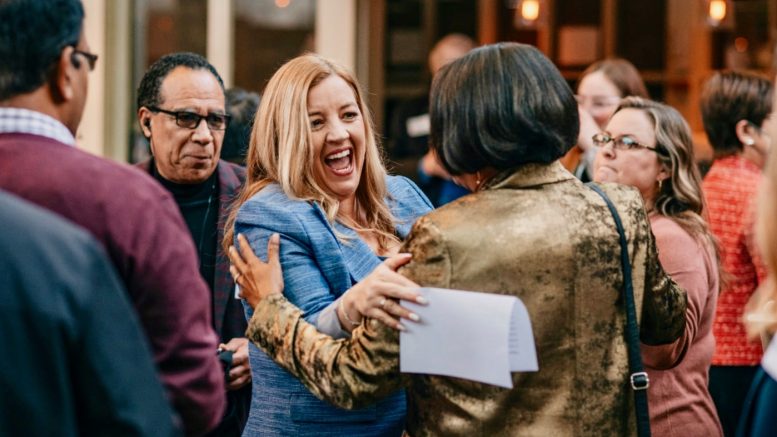 HER-story often repeats herself. That means behind every man’s failure there is a great woman to fix it. When the Founding Fathers screwed up by only giving men the right to vote, women like Elizabeth Cady Stanton and Lucretia Mott led the conversations at Seneca Falls, establishing the Declaration of Sentiments that concludes that American women are autonomous and deserve their own political identities.

When white men lynched young Emmett Till, his mother, Mamie Till-Bradley, bravely fought to re-claim his body – and for an open-casket funeral – showing the United States the true ugliness it was masquerading as justice.

When cancer ravaged the lives of Americans in the mid 20th century, Dr. Jane Cooke Wright was a medical researcher who helped pioneer chemotherapy. She was also the only woman among the seven physicians who founded the American Society of Clinical Oncology.

When “Man” chose to go to the moon, Katherine Johnson performed the calculations of orbital mechanics that NASA needed.

When the decorum of democracy was ignored and replaced with violence and hate, former First Lady Michelle Obama reminded the people to go high – and to face that challenge from the higher ground.

Modest matriarchs managed households and industries that produced society’s best and brightest. Capital queens have amassed wealth by building enterprises, inspiring entrepreneurship and innovation. There is no modern world without the women of the world. Yet, who runs the world?

Despite making up nearly half of the global population, according to the United Nations Global SDG database, numbers from a 2020 survey of 133 countries indicates that women only make up 36% of elected members of local governments. The inequality is greater in Sacramento, with only 33% of the council being woman as of today. It was 11% two years ago; and the difference in the quality of our government services since the addition of councilmembers Katie Valenzuela and Mai Vang really shows.

Safe grounds were established to successfully secure and assist homeless residents; funding was increased to begin development of low-income housing; and electrification and slow streets were prioritized to decrease greenhouse gas emissions. These progressive policy decisions take courage to implement – and endurance to fight for when conservatives show no restraint in conducting smear campaigns and stalling solutions. Is it reasonable to say more women elected in government correlates to a better Sacramento? Yes. Is it also fair to conclude that elected women cause Sacramento to be better? No doubt.

Anne Rudin and Heather Fargo paved the way for modern leaders like Angelique Ashby, who has been an advocate not only for her council district but the Sacramento community as a whole. Vice Mayor Ashby has spearheaded projects that will result in economic growth across the region, which is desperately needed to counteract the decline due to the pandemic. In addition, she has used her voice to offer perspectives and ideas in a way a man might not to further conversations on diversity and equity, public safety and childcare programs.

Now, Ashby is running to become the first woman in 20 years to represent the Sacramento region in the State Senate. If elected, she hopes to leave behind a legacy of leaders she has mentored, Caity Maple and Karina Talamantes, who are seeking to join the city council. Maple and Talamantes are among the many young women running for office this election cycle, which is an accomplishment in and of itself.

We should recognize and respect the heart and hustle it took for Ashby, Valenzuela and Vang to be in the positions that they’re in today. Despite menacing misogyny and systemic sexism, these women, and those before them, overcame that so they could serve others.

2 Comments on "Essay: For Sacramento, the story of women in leadership is getting brighter by the day"