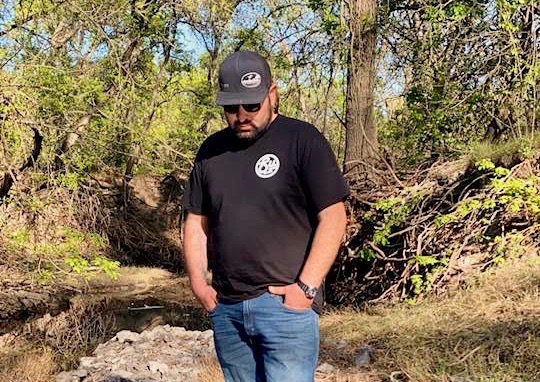 Chris Tocatlian, manager of the White Mallard Duck Club, stands besides one of the remaining carcasses of spring run Chinook near Butte Creek. Photograph by Dan Bacher.

After a ride in a jeep on a dirt road through White Mallard Duck Club, located in Colusa County’s Butte Sink, the club’s manager, Chris Tocatlian, his assistant Matt and I, arrived together at a troubling scene: A fish kill involving an estimated 200 endangered spring-run Chinook salmon.

The stench of rotting salmon still filled the air as buzzards circled above in the vibrant blue sky. Even though it was only three days since the disaster, the feathery scavengers and other predators had eaten most of the salmon, though there were still a few remaining for Tocatlian to show me.

News of the fish kill went viral after Tocatlian released an alarming video on March 13 showing a die-off in Drumheller Slough below Five Points Dam. Dozens of dead fish can be seen in that video.

Tocatlian’s introduction on the video started with his observation, “Three years of dragging feet and this is the stuff that continues to go on. Enough is enough. @California it’s time to get some people involved and get Butte Creek cleaned out, so these fish can pass through the correct way.”

The video was widely circulated by the Nor-Cal Guides & Sportsmen’s Association, the Golden State Salmon Association, the Friends of Butte Creek and other fishing and environmental groups, eventually reaching NOAA and California Department of Fish and Wildlife officials.

Spring-run Chinook were once the most abundant run of salmon in the Central Valley. For time immemorial, they traveled up Butte Creek and other tributaries of the Sacramento and San Joaquin rivers to wait in the cold mountain snowmelt water, until they were able to spawn. Beginning in March, they again began ascending the river and tributaries.

However, the building of major dams like Shasta, Keswick, Oroville, Folsom and Friant prevented the once abundant run of fish from reaching the cold pools and riffles of the upper elevations to spawn, as they once did. The majority of spring Chinooks are now found in smaller tributaries like Chico, Mill, Deer and Butte creeks, with the biggest run of wild spring salmon found in Butte Creek.

A total of 8,392 Central Valley spring Chinook salmon returned to Sacramento River tributaries in the fall of 2021. These fish included 5,749 natural-spawning fish and 2,643 Feather River hatchery fish, according to a report released by the Pacific Fishery Management Council in February. The number of natural spring Chinook wasn’t broken down by tributaries, but the majority spawned in Butte Creek.

An estimated total of 18,000 to 20,000 spring Chinook returned to spawn in Butte Creek in 2021, but the majority – some 14,500 – perished before spawning due to an outbreak of disease spurred by low, warm water conditions.

Under pressure from Friends of Butte Creek and other organizations, PG&E, which owns a hydroelectric facility on Butte Creek, finally released cold water for the salmon, but it may have already been too late for most of the fish.

The spring chinook run this year has just started, but the fish kill in the Butte Sink could be a harbinger of things to come this summer and fall as the West is currently in a drought that hasn’t been seen in 1200 years, according to climate scientists.

As Tocatlian noted, the salmon weren’t able to get through the logjams, mixed with trash and debris, that choke Butte Creek and went into e small slough after water was released for irrigation. When the water level went down, the fish were trapped and died. The fish were attracted by drainage from rice fields mixed with Butte Creek water.

Tocatllian has tried for a couple of years to get a permit to remove the debris choking the main channel of Butte Creek, but the Department of Fish and Wildlife hasn’t granted it to him yet.

“It’s 2022,” said Tocatlian. “I don’t know how many years it will take to solve this problem. These fish have been protected under the state and federally Endangered Species Act for many years. There should be no obstacles whatsoever for the fish now.”

Tocatlian’s job is to manage White Mallard Dam salmon ladder south of the bifurcation dam in Butte Sink, a sprawling landscape of wetlands and farmland crossed by sloughs, irrigation canals, drainage ditches and Butte Creek itself.

The Butte Sink Wildlife Management Area is part of the Sacramento National Wildlife Refuge Complex, located in Butte, Sutter and Colusa Counties, according to the U.S. Fish and Wildlife Service. Most of the Butte Sink WMA consists of privately-owned properties under conservation easement. One property, known as the Butte Sink Unit, is owned by Service but is not accessible. The Butte Sink typically supports wintering populations of over 300,000 ducks and 100,000 geese.

“Three years ago, I noticed a change in flow on the dam that I manage,” Tocatlian recalled. “Some fish were showing in odd places, such as the irrigation canals in Reclamation District 1004, which has water rights for irrigation for rice.”

Last year, Tocatlian brought the matter to the California Department of Fish and Wildlife’s attention, and also called Friends of Butte Creek.

“We met at the dam and told the CDFW what we needed, due to the permit process, but nothing got done and one year went by,” he explained.

Tocatlian took a video of another fish kill that took place last year, but says the CDFW representative told him “don’t touch them.”

“I saw fish die both last year and the year before,” he added. “The CDFW finally gave us a permit allowing us to keep debris out of the dam. But it only covers 200 yards around the dam … We let another year go by with no permit to remove debris from the creek, even though we had secured private funding to it from the White Mallard Duck Club. The Wild Goose (another duck club) also pledged a match what we secured.”

The permit that the CDFW approved doesn’t do anything for removing debris piles on four miles of creek, Tocatlian went on.

Things could finally be changing soon. Tocatlian mentioned that, on a positive note, he met with five staff members from the CDFW last week regarding the latest fish kill.

“The CDFW staff said they will try to get emergency permit to get the piles cleaned,” he shared.

Two phone calls that I made to a California Department of Fish and Wildlife biologist requesting an interview for this story had not been returned as of press time.

Tocatlian emphasized that spring salmon that are trying to go up to Five Points Dam on Drum Heller Slough were getting stuck and dying because Butte Creek is diverted west instead of south; whatever fish are in the system are going through irrigation canals to eventually get to their spawning grounds on Butte Creek in the Butte Creek Canyon.

Fishing guides and environmentalists were outraged after they saw the recent video released by Tocatlian.

Writing on his website, Mike Rasmussen, of Mike’s Guide Service (SalmonSacRiver.com), argued the video shows “the irresponsibility and utter disregard for a known and documented, federally listed endangered species that has migrated up this waterway for all of time.”

He added, “The bold acts of the water district 1004 show the arrogance at the immunity money can give. Disregarding the timing of the known migration patterns of these anadromous salmonids. Killing them off without hesitation when the whistle is blown, deadly in these times where literally every fish matters. There are still some that feel the existence of California’s most important fish species is meaningless. They are caring less if every last one is gone. Hats off to those who don’t turn their shoulder to wrong doings, who stand up for what they believe is right … I choose to be optimistic concerning salmon restoration, preservation and eternal existence. However, I am not blinded by the reality that under current conditions Chinook salmon could disappear from California waters in a matter of another generation or two.”

Ali Meders-Knight, a Master of Traditional Ecological Knowledge and practitioner for the Mechoopda Tribe – who’s coordinated community-based restoration of the Rio Lindo Creek watershed in Chico for 12 years – confirmed that salmon trying to make it up through Butte Creek are forced to go through irrigation canals to make it to their spawning grounds, due to the major diversions of water for farming on Butte Creek.

In fact, Meders-Knight said that Little Butte Creek, a major tributary of Butte Creek and the ancestral homeland her Tribe, has today disappeared into an irrigation canal for a vineyard.

“How does a creek that my people lived on for thousands of years disappear?” she stressed. “How does a vineyard take the water out of a creek after it was protected in 1973 under the Clean Water Act? All of our traditional soap root, salmon and steelhead, and the fresh water clams that we made money discs from are all gone. A lot of our fruits such as plums and other edible foods have all been removed.”

Meders-Knight noted that there were so many fish in Little Butte Creek, even in the 1930s, that people reported going to the creeks with pitchforks to harvest salmon.

“Once again, Butte County has another social and environmental injustice issue that they must address before another major disaster takes place, just like the Camp Fire and just like the Bear Fire,” she said. “The inability to mitigate a disaster stands out to me. They just let it happen. The next natural disaster will be a flood. Watch what happens when they have water where they didn’t’ have water.”

Tocatlian continues to have his own management concerns.

“I really believe this spring run migration is now completely man-made and man-ruined,” he offered. “There are too many diversions and not enough people watching over the diversions. This is why fish are trying to get through irrigation canals to get to their spawning grounds. That led to the video of dead salmon.”

Once salmon get to Butte Creek from the Sacramento River, through Butte Slough, through the Sutter Bypass and through the maze of canals and sloughs in the Butte Sink, arriving in the cold water pools of Butte Creek Canyon, they have another problem: Despite progress conservationists have made on removing dams and installing fish ladders on the creek over the past couple of decades, there is the continued operation of the PG&E hydroelectric project and other water diversions.

“The state and federal agencies’ refusal to hold PGE&E’s feet to fire is pathetic – they need to get this hydroelectric project out of the way,” Allen Harthorn, Executive Director of Friends of Butte, said last August. “They have been pussyfooting for years about installing a temperature control device at DeSabla Reservoir. We have to seriously talk about getting fish into cold water upstream and PG&E out of the way.”

1 Comment on "A harbinger: Trash and debris, temperatures and a hellacious drought just set the stage for another shocking fish die-off"