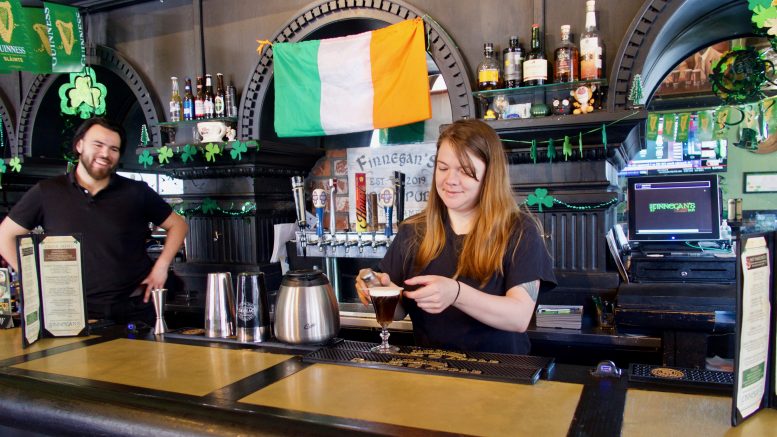 When Sean Derfield was little, he and his brother would go with their aunt to parades near San Francisco’s wharf, the trio beating a path through the constant action flowing from The Embarcadero to Ghirardelli Square. The boys’ aunt would always stop to slip them into a century-old saloon called the Buena Vista Café – all so she could order one of its Irish coffees.

Back then, Derfield had to stick to Shirley Temples, but he never forgot the image of a small steaming drink getting stirred inside a building from California’s frontier days.

“My aunt would just say it was coffee,” he remembers with a chuckle. “Just a different kind of coffee. We never knew she was having a cocktail.”

Decades later, when Derfield opened a bar in one of Sacramento’s own buildings from a bygone era, he channeled his childhood memories of the Buena Vista’s famous drink into a cornerstone of what he was out to accomplish. Now, his establishment, Sean Finnegan’s Pub, is gaining a reputation for its touch with Irish Coffee. In this, the bar’s giving a nod to a fairly new Celtic tradition, but its broader vibe is a fun tribute to an old drinking song about a corpse who won’t stay in his coffin.

Irish Coffee, as it’s known today, is a dark caffeine kick with whiskey, sugar and cream that’s finished with a layer of creamy foam on the top. Cocktails like it were served in parts of Europe as early as the 1800s, but it’s thought that the shamrock side of this hot drink started in 1942 with one Irishman, Joe Sheridan, who was a chef at the Shannon Airport in County Limerick. The inviting pick-me-ups that Sheridan was putting in a glass for everyone getting off planes found appreciation across the Irish Republic and in Northern Ireland. Given the cold, often rainy terrane, Irish Coffee was an ideal option to warm the blood for those stumbling through a pub’s doors as they escaped the weather.

Sheridan’s proximity to one of the few airports in Ireland brought his spiked coffee to the attention of the Buena Vista Café in San Francisco. According to the bar’s official history, on Nov. 10, 1952, its owner, Jack Koeppler, “challenged” noted Bay Area travel writer Stanton Delaplane to help him reproduce it. After a lot of tinkering and some travel back to Ireland – not to mention help from a San Francisco mayor who was a dairy farmer – the Buena Vista’s bartenders ultimately mastered Sheridan’s invention. They may have even improved on it: A key element to the Buena Vista’s Irish Coffee is using Tullamore DEW, a triple-blended Irish whiskey that was started in 1829 in County Offaly.

Since opening Sean Finnegan’s Pub three years ago on Sacramento’s Waterfront – or, in the heart of “Old Sacramento” – Derfield’s bartenders have followed the Buena Vista’s lead on Irish Coffee. They carefully hand-whip the cream and then spice up the mix with Tullamore DEW.

“Over the years, whenever I’d be down in the area, I’d always stop in the Buena Vista and get an Irish Coffee,” says Derfield. “We are making our traditional Irish Coffee like the Buena Vista does. At Finnegan’s, we consider ourselves to have the best Irish Coffee east of the Buena Vista. That’s what we often joke about. But they’re No.1, and least when it comes to being the top seller of Tullamore DEW in the nation.”

He adds, “Here at Finnegan’s, though, we are closing in on having sold 10,000 Irish coffees since we opened three years ago, which is a number I’m pretty sure we’ll hit by St. Paddy’s Day.”

A Finnegan’s Irish Coffee is always topped with the word ‘Finn’ stenciled in brown sugar across its foam. And it’s not only a handsome drink: One sip proves the bartenders know how to mingle that smooth sheen of vanilla effect with hints of smoldering cocoa coals.

“There’s an art to getting it perfect,” says Finnegan bartender Randine Volland. “It’s also about getting it level and making it pretty.”

Drinking an Irish Coffee inside Finnegan’s – or ordering any of its specialty cocktails or pub grub – means relaxing in a historic building that feels like it was meant for an Irish pub. This structure that fronts 2nd Street was originally a bank during the Civil War, which meant its second life as a tavern came with the title, the Bank Exchange. In recent years, Sacramentans knew the spot as the Sports Corner Café. When that business closed, Derfield saw his chance to open a Dublin-style pub behind these transporting walls from Sacramento’s early days. The ambiance he came up with walks an intriguing line between western saloon and Celtic speakeasy.

Finnegan’s also hints at a funeral parlor on the storm-swept countryside. Its big paintings of frumpy Irishmen lifting their whiskey from the walls are balanced by a print of Henry Fuseli’s 1781 masterpiece “The Nightmare,” a pre-Victorian imagining of a demonic incubus squatting on a helpless woman’s chest. There’s also a sepia-toned portrait of three Guinness drinkers above one table, with its center man having the ability to open his eyes inside the frame: He sometimes sneaks a glowing blue death-stare at Finnegan’s patrons as they sip their porters.

But of course, the most eye-catching decoration in the pub is its full-sized coffin over the bar. It’s not unheard of in Irish villages for the pub owner to also be the local undertaker. That history may have influenced the composition of a saloon song in 1864 called “Finnegan’s Wake.” The ballad tells the story of Tim Finnegan, a lovable lush who falls off a ladder, smashes his head and hence forces his wife to put on a traditional Irish wake. But Tim’s friends and family drink too much booze during the observance. Eventually, a brawl erupts, causing whiskey is spilled all over pour’s corpse. That is when everyone present gets a huge surprise. The great Irish writer James Joyce loved the song “Finnegan’s Wake” so much that he lent its name to his last, highly experimental novel.

“That is Tim Finnegan inside the coffin,” Derfield confirms, adding that the life-sized animatronic Irish singer perched next to the box is Sean Finnegan, the pub’s namesake, who comes to life every 30 minutes to help revive the dead man by playing a trad Irish song.

“It’s just part of that theme of celebrating life,” Derfield stresses. “That was the purpose of the best pubs when I was growing up, and that’s what we’re all about here.”

Scott Thomas Anderson is also the host of the ‘Drinkers with Writing Problems’ podcast, the first episode of which is written and recorded in Ireland.