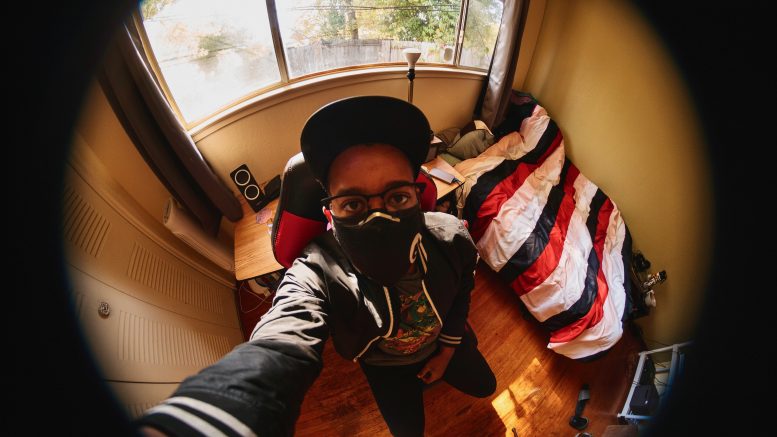 Sweat was everywhere. On a misty stage at Harlow’s last October, Henri Cash and Arrow de Wilde of the band Starcrawler seem to lose their spines as they both bend backwards, de Wilde’s navel pointing toward the ceiling as she touches the stage with fingers and toes in a perfect arch. The dynamic scene was frozen in time thanks to the work of Sacramento photographer Cam Evans.

Evens has been drawn, like a drug, to the vibrating connection between bands and their fandoms. That is what’s kept the innovative image-shooter coming back for more. If you wake up in Sacramento with your ears ringing from a night of high-energy live music, the chances are that Evans was there documenting it all.

“I gotta do this – I can’t stop,” Evans tells SN&R. “I couldn’t see myself doing anything else. I got obsessed with doing photography over my senior of high school. My folks really advocated for it, pushing me to do it and get my stuff out there.”

Born an army brat in Riverside, Evans’ father did a lot of moving around during his time with the U.S. Air Force, until the mid-90s when the family landed in Sacramento.

“Basically, I’m a native to Sacramento,” says the city’s most prolific live-music photographer. “Most of the time, I just show up with a camera and go from there. I try not to be too fancy about it.”

Since first photographing a show in January 2017 at Cafe Colonial, Evans has snapped thousands of freeze-frames at hundreds of shows, often capturing the high-octane energy both on and off stage. Evans has also released three photo collections: 2018’s “Sacramento’s Burning,” “Girls Burn Boys” a year later, and “Black and White Photos and Some Venues,” released July 2020.

“I thought it’d be a fun idea to showcase these awesome bands and amazing shows that [people] need to check out,” Evans explains. “Someone from Texas contacted me a couple of months ago to say, ‘I really enjoyed your photos. That was like a huge inspiration to me, going in to photograph shows.’ If I can get something like that, I honestly don’t need thousands of copies sold.”

Evans’ humility goes beyond compliments from photography fans and lately equates to a strong urge to give back to the music, especially in the wake of it being rocked by severe hardships from COVID.

“I kind of feel bad about people getting back to groupthink,” Evans says. “2020 fucking sucked and, personally for me, the following year was terrible.”

Admirers of Evans have been growing over the years. At Phono Select’s first in-store event in July of 2017, owner Dal Basi invited the New York-based band Baby Shakes to perform. Evans showed up, camera in hand, and Basi immediately felt a kinship thanks to Evans’ Do-It-Yourself nature.

“We also had his launch party here,” Basi said of Evans’ first photo zine. “The shop’s always been in support of Cam since they started. Their documentation is really vital to keeping track of things. The fact that they do it all DIY is really inspiring because that’s kind of our approach.”

In the same month Evans’ July 2020 zine was released, writer and podcaster Aaron Carnes, artist Ken Davis and Evans all spent a day at 924 Gilman in Berkeley. Legend has it that the three masked fellows spent a sweltering day shooting the cover of Carnes’ book, “In Defense of Ska,” an experience that Evans said helped “escape all the bullshit during the pandemic.”

Carnes often saw Evans while performing at or attending shows. When Carnes’ band Gnarboots performed at SpaceWalker’s Funky Spooktacular in 2018, Evans was in the audience to capture the event.

“[Evans was] randomly at a few of our shows when we played in Sacramento and took some really cool photos of us,” Carnes recalls. “They were some of my favorite photos that I’ve ever seen of us.”

After spending a day with Evans at Gilman, Carnes thinks he got a glimpse of the latter’s creative energy flowing into a similar zone as what’s often observed at Sacramento’s live shows.

“They kind of slide into shadows, not to draw attention away from the people who were actually performing and not getting in the way of the people that are enjoying the performance,” Carnes notes. “I think that’s why they get really good shots of the performers [and] the audience. Some of the photos will just be like these really great photos of people enjoying the show.”

Sacramento punk band Destroy Boys’ singer Alexia Roditis says she’s followed Evans from the earliest photography work. The band is currently touring the UK in support of the Oct. 2021 release of their album “Open Mouth, Open Heart.” Roditis admires Evans for all they’ve done for the Sacramento music scene, referring to the photographer’s work as “hugely important.” She admitted that her band has been photographed by Evans so many times, she lost count.

“I’ve seen Cam at a ton of different shows and they’re always such a joy to see,” Roditis acknowledges. “They’ve done a lot of live photos for us. Cam’s work captures the chaos of a show while also being very in focus of the artist.”

“I was really into how he seemed to capture expression and emotion in people,” Carnes stresses. “He snaps the photo at the right moment to where you can feel the movement, or the energy, of what people are experiencing in that moment.”