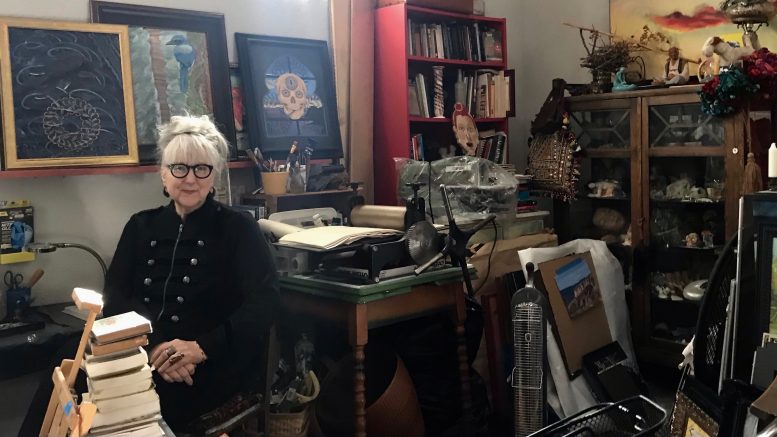 As the housing crisis worsens, artists who had a breakthrough project three decades ago may have a track record worth repeating

Surreal Estates sounds like a good name for an artsy theme park or miniature golf course, but it was the actual name that a group of Sacramento creatives picked for a city block where they successfully built a tiny housing community for themselves years ago.

By leveraging subsidies from city, state and non-profit organizations – and by adding their own sweat equity during the construction process – these determined artists purchased a run-down block in Old North Sacramento and turned it into an ensemble of 11 homes and 11 adjoining studios. This year marks the 35th anniversary of the idea that would become Surreal Estates.

The long road to a vision

Sacramento painter Kim Scott was one of the original group members. For decades, Scott lived and worked illegally out of the Elliot building, a dilapidated multi-unit structure that was zoned for commercial use. Like many artists, she wanted a home to call her own, one with a little studio space that didn’t violate any city codes.

In the late 1980s, Scott was on a committee with the Sacramento Metropolitan Art Commission, which convinced the city to change its zoning laws to allow for living and working spaces for artists. She and some other hopefuls then tried to buy the Elliot building that they rented, but they weren’t successful. The group was open to the idea of buying a warehouse to break up into units. They submitted a bid on a building, but the city wouldn’t allow it for what they envisioned.

Eventually, the artists started to think “Why not build from scratch?” They were offered a vacant lot from the Sacramento Redevelopment Agency. But that lot, at 58 Arden Way, came with a hazardous waste designation.

“So, we went to the Sacramento City Council and said, ‘Thank you very much for this [toxic] site,’” Scott remembered. “‘Would you give us the value of that property instead, so that we can spend the money somewhere else in redevelopment?’”

To the group’s surprise, the City Council agreed. Local ceramicist Robert Charland found a building site in Old North Sacramento that was attached to a grammar school playground. This undeveloped 1.3-acre site had been neglected and strewn with garbage.

“One of the corners was a pick-up spot for sex workers and drug deals,” Scott acknowledged.

The artists group, now calling itself Surreal Estates, bought the block-sized lot for $11,000, with the idea of going back to the city and asking for more financial support around construction costs. In addition to small down payments, the artists offered their own sweat equity towards the costs.

“We wanted everyone to own their own home, studio and property, which would set us apart from almost all other artist communities,” Scott explained.

A combination of grants and loans, including one from the Sacramento Housing and Redevelopment Agency, eventually came through. Mercy Housing California, the nation’s largest nonprofit affordable housing developer, also offered them financial support, as well as a contractor to teach the artists how to build.

In 2005, after 17 years of asking, the Surreal Estates artists finally pulled together the funding, approvals and permits to begin building a structure on the site. Local architect Andrea Kincaid designed the homes. Some of the 24 residents would have 800-square-feet, while others would get 1,200-square-feet at a higher price. Every home had skylights and an upstairs loft, which increased the square footage. All of the backyard studios were 1,000-sqaure-foot and included clearstory windows and 8-by-8-foot heavy-duty roll-up doors.

During the years-long process of putting the Surreal Estates puzzle together, some artists who were originally involved had to drop out, and new artists were brought in. Of the final group, none were homeowners and all of them came from a lower or lower-middle class lifestyle.

The construction itself painted an eclectic picture: Some artists had skills they could bring to the building phase, while others brought their enthusiasm and more general know-how. Each artist was required to put in 35 hours of labor per-week. Their individual 30-year fixed mortgages were custom tailored by the same bank at the same time.

The artists interviewed for this story agreed that the building phase was a nightmare, and that they were lucky that nobody was injured in a major workplace accident.

“I took a plate glass window to the head, and got 27 stitches,” said Robert Johnson, an audio artist and sound technician.

Craig Maclaine, owner of the Toyroom Gallery at Surreal Estates, told about running an auger in a water filled ditch and accidentally hitting street light wiring. “If those lights were on, I would have been fried,” Maclaine observed.

Early into building, a photographer named Joel Sternfeld came out for a visit. Sternfeld was on a mission to photograph utopic, sustainable eco-villages for a book he titled “Sweet Earth.” But Surreal Estates only had two walls up at the time.

“We had a website, and it kind-of looked like more was going on here,” said Scott. “So, Joel comes out and says, ‘Where is everything?’”

Nevertheless, Surreal Estates made it into Sternfeld’s book with two photographs of bare walls and a beautifully written synopsis.

Adding to their difficulties, the artists had chosen a new building material called Structural Insulated Panels, or SIPs, which was unknown to most Sacramento contractors at the time. Mercy Housing vetted a new contractor it believed could work with the panels. That professional was supposed to be on site daily and teach the creative but unskilled workers. The partnering was not a good fit.

“We had to tear some things apart and rebuild them three times,” Maclaine said.

Scott recalls the group having to rely on its own ranks. “Luckily there were a couple of good heads in our artists’ group, Rob White and Jack Neilson, that were constantly putting out fires,” she noted.

Tensions eventually broke out, based partly on the varying skills and work ethic of each artist. Some recruited friends and relatives to help, but that meant more unskilled workers. Some structures were getting finished first, while others had more problems and required do-overs. At times, when artists were supposed to be working cooperatively on everyone’s homes, the growing animosity made them retreat to work on just their own houses.

Such was the drama that “if this had been a reality show, we would all be millionaires now,” Scott speculated.

Yet, despite the unskilled labor, controversial contractor, construction do-overs and individual tensions, all 22 structures were completed in 16 months.

“There were no fisticuffs,” Maclaine joked. “Mercy [Housing] said they’ve never done a project where somebody didn’t get kicked out for fighting.”

Measuring the success of the project

For Scott, the value of Surreal Estates comes from her low mortgage payment ($550 per-month), her art studio, and being able to live among other artists.

“When we started this, I thought, ‘this is not a real estate deal, it’s a lifestyle deal.’” she said. “I could go to any one of these people if there was trouble.”

Johnson has plenty of room in his larger home, and refinanced his monthly payment to $900 on a 15-year mortgage.

“The big benefit is to work on the same property where you live, with people active in the arts that would not be able to get into a traditional home,” he remarked.

Dolores White was among the first artists to join Surreal Estates.

“It was exciting to be part of a project that was the first of its kind in the US,” White said, “new, affordable housing/studios and a community built by artists for artists.”

The neighborhood improved in the early years. As the project started going up, the notorious nearby street corner became friendlier.

“The sidewalks were used by some neighbor kids to play on, and others to walk their dogs on,” said Scott.

Some of the Surreal Estates artists, including the Whites, Ric Maverik and Skinner Davis, opened their studios for public receptions. Others volunteered to teach art workshops at the school next door. Similarly, they all supported the local economy by shopping in the neighborhood.

Yet over the years, Sacramento’s broader and intensifying homeless crisis has started to impact the area, while its crime rate has also been going up. It became clear that Surreal Estates could not transform the whole neighborhood into an urban renewal miracle all by itself. But it is still considered by many the jewel of that neighborhood, even as a couple of fences went up to create a safer environment.

Surreal Estates’ homes and studios, which originally cost between $120,000 and $225,000, still look great after 16 years. Most of the original owners are still there, and Scott says everyone still watches out for one another. Success could also be measured by the current fair market value of each house. According to Zillow.com, that value ranges between $250,000 and $390,000.

Could the Surreal Estates success be repeated or scaled up?

SN&R reached out to the Sacramento Housing and Redevelopment Agency and City Hall to ask if similar projects to Surreal Estates were being actively contemplated or sought-out in order to help struggling tenants and would-be homeowners in the creative economy. Interview requests were declined or not responded to. However, Dolores White feels that a group of unskilled artists could be successful again with the right motivation and work ethic.

“More importantly,” White said, “having an experienced builder with the ability to lead, teach and inspire the group dynamic is critical.”

“If it was done with regular construction materials, and a competent contractor who is used to dealing with unskilled labor, I think it could,” he said.

Everyone agreed that a shorter approval time would help any future project.

“We had so many city agencies, county agencies, church organizations involved,” said Maclaine. “There needs to be a department that just specializes in it.”

Was Surreal Estates worth 19 years of the artists’ efforts?

“In the end, the best feeling is a pride of ownership,” said White, “and the simple joy of sharing our home with family and friends, as we make new art and celebrate life’s milestones.”

Be the first to comment on "Could Sacramento’s Surreal Estates experiment be the key to more housing for the creative economy?"