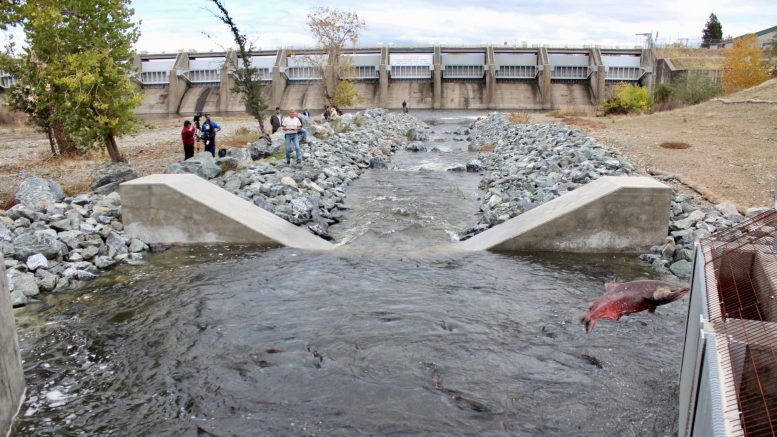 A new fish ladder went into operation on the American River below Nimbus Fish Hatchery in November 2021. Photo by Dan Bacher.

Low numbers of adult fall-run Chinook salmon returned to spawn in the Sacramento River in 2021, but the ocean abundance forecast for fall Chinooks, which the ocean recreational and commercial fishing seasons are largely based on, is better than last year: That’s according to federal and state scientists at the California Department of Fish and Wildlife’s annual salmon information meeting held virtually on March 2.

The 2022 ocean abundance projection for Sacramento River fall Chinook – the driver of West Coast salmon fisheries – is estimated at 396,500 adult salmon, compared to a 271,000 forecast last year at this time, according to Dr. Michael O’Farrell of the National Marine Fisheries Service.

The abundance estimate for Sacramento fall Chinook swimming in the ocean is now based largely on the return of two-year-old “jacks” to hatcheries and natural spawning areas last fall. A total of over 17,000 jacks returned to the river last year, compared to 14,000 the previous year.

Under the 2021 regulations, the projected spawning escapement (number of fish returning to the river) in the Sacramento River Basin was 133,913 hatchery and natural area fall Chinook adults, according to the Pacific Fishery Management Council, o PFMC. However, only an estimated 104,483 hatchery and natural area adult spawners actually returned to the Sacramento River Basin in 2021, well below the conservation goal of 122,000 to 180,000 fish.

In the coming weeks, Pacific Fishery Management Council officials will use the ocean abundance forecasts and other data to set times, and areas, open to both sport and commercial ocean salmon fishing for 2022. The California Fish and Game Commission will then approve the recreational ocean season, along with approving a sport season for the Sacramento, American, Feather and Mokelumne rivers and the Klamath and Trinity Rivers.

Recreational river anglers said season was one of the worst ever

During the public comment period, commercial salmon fishermen, who harvested  200,419 Chinooks last year off the California coast, said salmon were abundant in the areas where they fished.

In contrast, recreational anglers and river fishing guides said relatively few salmon returned to the Sacramento River and its tributaries and fishing was some of the worst they had ever experienced.

The total estimated harvest for recreational anglers was 14,560 salmon, amounting to only 2.7 salmon per 100 angler hours.

“The population is on the decline – I didn’t even go out fishing for salmon last year. Salmon was my favorite fish to fish for, but I don’t even do it anymore,” Leonard observed.

Robert Dunn, a Sacramento River fishing guide for 37 years, said he believes “there is an overharvest of fall fish in the ocean.”

Dunn testified, “I couldn’t find one spawning redd from Deschutes Bridge to Red Bluff last year during 80 trips from October 2021 to February 2022. We need to increase the run to 360,000 fall-run fish. 2021 was the worst season ever. We have to get more fish in the system. The balance of ocean versus bank fishermen is just not there. We need a complete readjustment of escapement in rivers to benefit society.”

Jared Davis, the Captain of the Salty Lady Sportfishing boat out of Sausalito, reminded everybody that “the huge elephant in room is not addressed here – in river habitat conditions and flows and water temperatures.”

Davis said the fishery managers should include graphs showing river flows and conditions in the river spawning escapement reports in the future.

Klamath River fall Chinook salmon were declared “overfished” in 2018, following several years of poor returns to the Klamath River Basin, and have not yet achieved a rebuilt status under the terms of the federal Salmon Fishery Management Plan, according to the CDFW.

After the meeting, state wildlife officials issued a statement noting that the PFMC may “decide to take a conservative approach when crafting 2022 ocean salmon seasons to provide additional protective measures to this stock.”

Likewise, in reference to the Klamath Basin outlook, John McManus, President of the Golden Sate Salmon Association, said the low number of Klamath River salmon “will likely lead to constraints on both commercial and sport ocean fishing this year, especially in north state coastal waters.”

“We are hoping for a decent salmon fishing season this year, and there’s some reason for optimism, but there are several variables yet to be dealt with,” said  McManus.

He also pointed out that more fish actually returned, but died of heat related causes including disease prior to spawning due to low, warm, water conditions connected to drought and water management decisions by the Bureau of Reclamation and California Department of Water Resources on Central Valley rivers. “The inland sport fishery continued to be poor in 2021,” McManus noted, echoing the comments of river anglers and guides.

The National Marine Fisheries Service said it will recommend that this year’s fishing seasons be structured so the number of salmon that evade fishermen and spawn is closer to the top end of the escapement target, 180,000 fish.

“Although the 2022 forecasts will allow a fishery, the entire Central Valley is still deep in drought, which has greatly reduced survival of natural spawning salmon there,” McManus said.

The outlook for winter-run and spring-run Chinook salmon, both listed under the State and Federal Endangered Species Acts, looks dire, considering the continuing  drought conditions California now faces.  Fishery advocates fear a repeat this year of last summer, when the majority of juvenile winter run Chinook perished before spawning.

Spawner escapement of endangered Sacramento winter-run Chinook salmon in 2021 was estimated to be 10,225 adults and 281 jacks. By contrast, 117,000 winter run salmon returned to the Sacramento River below Keswick Dam in 1969.

Unfortunately, only 2.6 percent of juvenile winter salmon this year survived in the warm water conditions on the Sacramento River, according to a CDFW report issued on December 31.

The Winnemem Wintu Tribe is currently struggling to get the federal government to support their plan to reintroduce the original strain of winter Chinook salmon, now found in New Zealand after being introduced to the Rakaira and other rivers there over 100 years ago, back to the McCloud River above Shasta Dam.

A total of 8,392 Central Valley spring Chinook salmon returned in the fall of 2021. These fish included 5,749 natural-spawning fish and 2,643 Feather River hatchery fish.

The number of natural spring run Chinook wasn’t broken down by tributaries, but   the majority spawned in Butte Creek. An  estimated total of 18,000 to 20,000  spring Chinook returned to spawn in Butte Creek in 2021, although the majority, over 14,000, perished before spawning: sacramento.newsreview.com/…

McManus said efforts in recent years to increase survival of its hatchery salmon through “innovative release techniques” have greatly aided the ocean fishery, as illustrated by data released by the CDFW.

“What’s needed is a few years of good returns and some water to help rebuild the natural spawning stocks,” said McManus. “We are working overtime to get more river flows for salmon, coupled with habitat and hatchery improvements.”

“Drought and over-diversion of the Central Valley rivers in years with less rainfall is a major reason for declines in the salmon population,” he concluded. “The State Water Resources Control Board is tasked with rebalancing how water is shared in the Central Valley but has failed to adequately protect salmon. GSSA is working through the courts and state and federal governments to address the problems facing salmon communities and the fish they depend on.”

On the Klamath River, Tribes, fishing groups and environmental organizations are hoping that the Federal Energy Regulatory Commission (FERC) will issue a final approval this summer, with dam removal activities slated to begin soon after. FERC recently released its draft Environmental Impact Statement (DEIS) on the proposed removal of the lower four PacifiCorp Klamath River dams.

“This is the biggest salmon restoration project in history,” noted Russell ‘Buster’ Attebery, Chairman of the Karuk Tribe. “And it’s desperately needed. Fewer and fewer salmon return each year. If we don’t act now, we may lose them all. Dam removal gives me hope that my grandchildren will be able to fish for the family dinner the way I did when I was a kid.”

Stakeholder input will be taken into consideration when developing three salmon season alternatives during the March 8-14 Pacific Fishery Management Council (PFMC) meeting, according to the CDFW. Final season regulations will be adopted at the April 6-13 PFMC meeting.

For meeting links, agendas and other materials from this and future meetings in the pre-season process, go to www.wildlife.ca.gov/Fishing/Ocean/Regulations/Salmon/preseason

TOPICS:Salmon in the Sacramento River