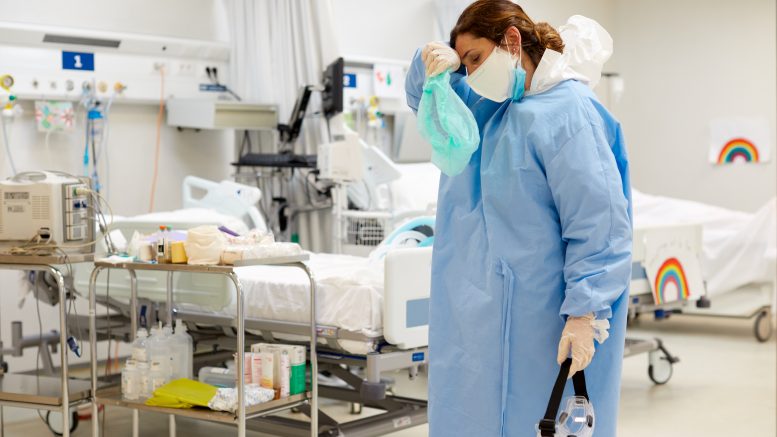 California health care workers feel worn out, denied the staffing and support that would let them do what they do best.

Several months into what has become a two-year siege, Brenda Chavez identified a tipping point. Her fellow nurses at Centinela Hospital in Inglewood were beginning to run ragged. A colleague took a stress leave. Several others left the hospital and didn’t return.

“I’d never seen anything like it,” Chavez, an RN in the hospital’s emergency department, told Capital & Main last year. “It was tough. We were seeing friends and co-workers who just finally had to leave when it got to be too much. They didn’t feel safe. They didn’t feel supported.”

As the COVID-19 pandemic unfolded in California and across the U.S., health care workers were hailed as heroes, feted during long hospital shifts by rounds of applause and even gifts of food. They were praised by government officials. The pope prayed on their behalf.

Two years into the health crisis, though, nurses say they’ve come to realize that not much has changed. Hospitals continue with staffing levels and bedspace capacity that are inadequate to any surge in emergency care, including multiple COVID surges since those early months of 2020. Health workers still find themselves battling their own employers, most of them profit-driven companies, to create conditions that will allow them to provide the kind of care they say patients need.

“We were getting pizza and ice cream. We didn’t want that. We wanted things like personal protective equipment and enough staff to do our jobs,” says Zenei Triunfo-Cortez, an RN and co-president of National Nurses United. [Disclosure: Nurses quoted in this story are affiliated with the California Nurses Association/NNU and the United Nurses Associations of California/Union of Health Care Professionals (UNAC/UHCP). Both groups are financial supporters of Capital & Main.]

By all accounts, the pandemic has left a deep mark on the nursing industry. Experts say that about 20% of all health care workers have quit since the onset of COVID, and leaders of several nursing unions say they’ve lost moderate numbers of members over the past two years. Hospital administrators and lobbyists, meanwhile, claim they cannot substantially increase staffing levels because of a severe shortage of nurses willing to take their jobs.

In reality, those forces have been at play for years, perhaps decades. As the health care industry in the U.S. moved stridently toward a profit-first model, workers have felt the effects of staffing levels being trimmed to the bone while hospitals regularly run at nearly full capacity — and many workers have made the decision to leave.

The fallout among registered nurses has been especially striking. According to the National Council of State Boards of Nursing, there are more than 4.3 million RNs with active licenses in the country, and some 5.1 million RN licenses issued overall. Yet only about 3 million are currently employed as RNs, 1.7 million of them at hospitals.

“Many nurses across the country were experiencing burnout even before COVID,” says Denise Duncan, president of UNAC/UHCP. “A lot of those were people who did not feel supported by their employers. And, of course, we lost some people who’ve simply said ‘enough’ during COVID.”

Long hours and weeks in dangerous conditions, often in makeshift settings including tents erected outside facilities and storerooms converted to intensive care areas, led some nurses to take leaves of absence, retire early or simply quit. Some objected to being required to get vaccinated, union leaders say, while many who left saw inadequate staffing — and, thus, increased workloads and inferior patient care — as a problem that wasn’t going to get solved.

California is the only state in the country with mandatory ratios of nurses to patients in hospitals, requiring one nurse for every two patients in ICUs and one for every four patients in emergency departments. But as COVID surged, Gov. Gavin Newsom quietly allowed hospitals to relax those ratios, leading nurses to stage protests over what they saw as a capitulation to hospital systems that knew they were understaffed and did little to address the problem.

“Fairly early on, maybe by the second surge [in 2020], we were short-staffed,” Mary Lynn Briggs, an RN at two hospitals in Bakersfield, told Capital & Main last year. “Even with [temporary] travel nurses brought in, we were short. But you could see that coming. I’d felt for a very long time that the other shoe was going to drop.”

Many hospital administrators have said repeatedly that they cannot hire nurses fast enough to meaningfully increase their staffing levels. Dr. Jeanne Noble, who directs COVID emergency response at the University of California-San Francisco’s Parnassus Hospital, said in December that her department was relying on travel nurses for about 20% of its shifts.

“If there is an outbreak somewhere, they will go to that region of the country, in part simply because the pay for them is higher in emergency situations,” Noble said. “So we have struggled for nursing staff even though, directly speaking, we haven’t had a lot of COVID cases in our hospital lately.”

The problem, Noble said, is that in a profit-driven health system, hospitals make money by constantly running at nearly full capacity, “so even a surge of the flu or some other illness” can put them into overload very quickly. UCSF plans for that, she said, but many other hospital systems do not.

The pandemic brought these dynamics to the fore. RNs were spread thin, dealing with levels of illness and disease the likes of which they’d never seen, and overwhelmed by sheer numbers. Two straight years under near-constant emergency conditions have taken their toll.

“We are in moral distress. It’s different from burnout,” said Jill Leon, an RN in the COVID unit of Kaiser’s Walnut Creek hospital. “There is not a shortage of nurses; we have nurses. But they are not willing to work because the staffing situations put them in a position in which they are not able to care for their patients in the way they know their patients need to be cared for. I am constantly talking with other nurses who say, ‘We’ve got to get out of this.’”

Where this all leaves the profession is a fascinating question, in part because of one statistic that appears to buck the trend. In 2020, the first year of COVID, student enrollment in nursing programs across the country rose considerably, according to data gathered by the American Association of Colleges of Nursing. Experts suggest that forecasts of future nursing shortages, and therefore plenty of job opportunity, have led to more prospective RNs entering the system.

“The United States has a robust supply of nurses. And there is no evidence that recruits to nursing have been deterred by COVID,” wrote Linda H. Aiken, a professor at the University of Pennsylvania School of Nursing, in the New York Times. “Nevertheless, we find ourselves too often with a shortage of nursing care.”

To UNAC/UHCP’s Duncan, those nurses coming into the pipeline indicate that it’s still possible to rebuild RN staffing levels. The union leader also says it would “not be authentic” to lay off every COVID-related problem on poor hospital planning, “because this was the unknown.”

“This is an opportunity for health care to partner with unions, with schools, with communities to recruit and restock our numbers,” Duncan says. “It’s an opportunity to diversify our workforce, which we badly need in certain parts of California. We can go forward. We don’t have to go back to the old ways.”

1 Comment on "After two years fighting COVID, nurses wonder: What has really changed?"