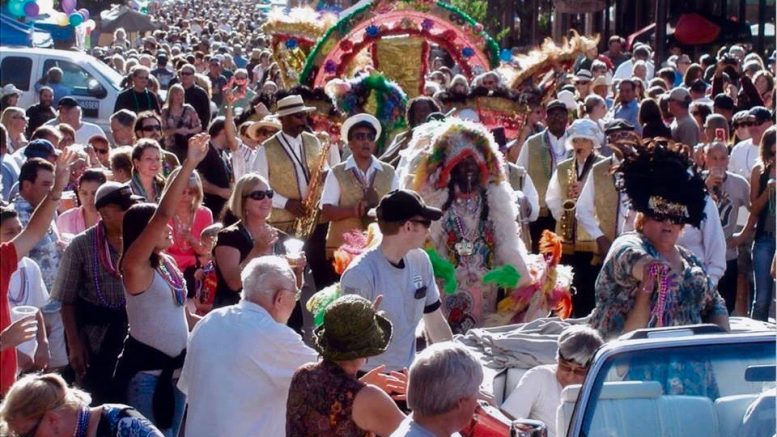 “Louisiana Sue” Ramon, seated in the car, throwing one of her signature Mardi Gras events in Northern California. Courtesy photo

Louisiana Sue is on the loose again, this time planning a party for the Capital City that will hit harder than the hurricanes she grew up with along the Mississippi River.

Split between two locations, the ‘Mardi Gras Meets Carnival’ throwdown on Feb. 26 aims to be an all-out extravaganza of live music, family activities, cocktails and New Orleans and Brazilian food indulgence. Put on by “Louisiana Sue” Ramon, a Sacramento resident who grew up on the outskirts of the Crescent City in Chalmette, it incorporates everything from joyous street dancing to powdered beignets and bowls of bubbling gumbo.

“I know how to throw a party,” Louisiana Sue warned last week.

Sue is co-producing the events with Miguel Castillo’s LIfe Entertainment.

She’ll also be coordinating with Wes Samms and The Curiosity Collaborative, which are hosting the City of Trees Parade, a major Mardi Gras-style march and float spectacle designed to give the day a truly unforgettable feel.

“The City of Trees Parade is all about lifting up Sacramento art, music, and culture,” Samms told SN&R. “The core idea of Mardi Gras is freedom and personal expression … When we celebrate Mardi Gras here in Sacramento, we’re encouraging creativity and fostering pride in our city and in our heritage wherever we are, whoever we are.”

The next part of the afternoon is the Big Mardi Gras Party, a ticketed event for 21 and older. It will be at Old Sacramento’s “Freeway Gardens” parking garage next to the tunnel and Pony Express statue – and it runs from 1 p.m. to 11 p.m. The food at this fun fest includes empanadas, alligator, frog legs, oysters, po boys, catfish, shrimp, dirty rice, red beans and rice, wings and all variety of sandos. The drinks include the New Orleans cocktail special, the Hurricane, along with Fire on the Bayou, margaritas, cachaca and beer. This part of the day has a knock-out music line-up. It begins with the Big Chiefs at 1 p.m., followed by Peligro Brass at 3 p.m., Agua De Beber at 4:30 p.m., Mick Martin’s Big Blues Band at 5 p.m., the Dirty Chops Brass Band at 6:30 p.m., BeaufunK, featuring Michael Jeffries of Tower of Power, at 8:30 p.m. and Samba Da at 10 p.m. Admission is $15 in advance and $20 at the gate. Tickets at Lasuepresents@gmail.com.

Separate but connected to Louisiana Sue’s events on Feb. 26 is The Curiosity Collaborative’s City of Trees Parade, running between 5 and 7 p.m. The parade will begin at 9th Street and Capitol Malland and end on 2nd Street in Old Sacramento. Local chef Patrick Mulvaney and FOX40’s Sonseeahray Tonsall – the daughter of a Louisiana native – have been crowned the parade’s official royalty.

“My hope is that when kids and adults see the amazing performers, costumes, and musicians that live here in the Sacramento area, that they will say, ‘Hey, I want to do that too! I want to play the drums. I want to dance and have all the eyes on me. I want to make a suit out of pipe cleaners and hot glue and walk around like I own the place,’” Samms explained. “I hope it will bring more money to the creative community in Sacramento, lift up the unseen wonders that exist here, and encourage everyone to be proud of who they are and where they live.”

Be the first to comment on "Sacramento dives into Mardi Gras season with major events in Old Town, Downtown on Feb. 26  "